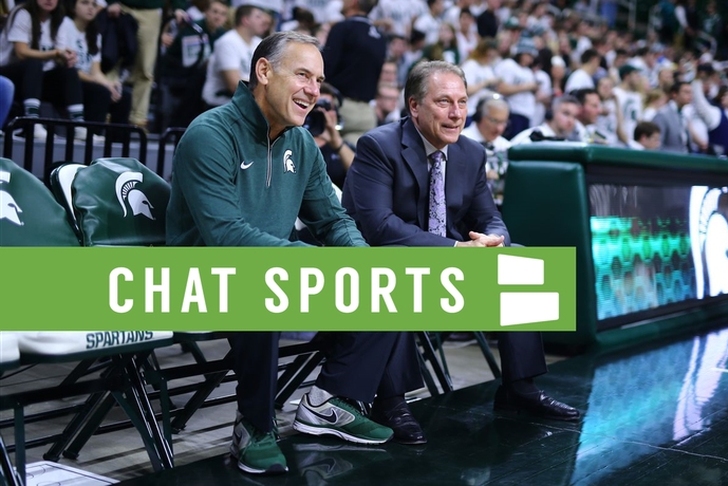 Michigan State has received a lot of unwanted attention over the past several weeks due to the Larry Nassar scandal, which has resulted in the ousting of both athletic director Mark Hollis and school president Lou Anna Simon. Nassar, who was employed by Michigan State and served as the national medical coordinator for USA Gymnastics from 1996 to 2014, was sentenced to 40-175 years in prison after more than 150 women accused Nassar of sexually abusing them.

However, Outside the Lines published an explosive report on Friday that revealed a "culture of sexual assault" within both the men's basketball and football programs at the school. The entire report is worth reading, but here are the six most shocking findings from the report:

1) There have been several reports of sexual or violent incidents within the men's basketball program
Michigan State's men's basketball program is the crowned jewel of the school and was previously thought of as one of the country's model programs under head coach Tom Izzo. This report indicates the program is anything but, citing numerous cases of sexual assault and violence among members of the program - including a coach.

Outside the Lines also has obtained never-before-publicized reports of sexual or violent incidents involving members of Izzo's storied basketball program, including one report made against a former undergraduate student-assistant coach who was allowed to continue coaching after he had been criminally charged for punching a female MSU student in the face at a bar in 2010. A few months later, after the Spartans qualified for the 2010 Final Four, the same assistant coach was accused of sexually assaulting a different female student.

2) There were multiple accusations of rape regarding men's basketball players and coaches
Among the most serious findings of the men's basketball program include two cases of alleged rape with which both the program and school did nothing about. The first incident involved basketball players Keith Appling and Adreian Payne, who former Michigan State student Carolyn Schaner said she was cornered by and "felt trapped and fearful of refusing their advances" - yet police and prosecutors did nothing about it.

Schaner says campus police investigators told her that, because of Payne's police interview, they had a solid case to pursue. Once the case was forwarded from police to Ingham County prosecutors, Schaner was interviewed by an assistant prosecutor, Debra Rousseau Martinez. Schaner says Martinez told her she did not seem strong enough to stand up to questioning that would come as a result of making allegations against MSU basketball players.

No charges were filed in the case. The assistant prosecutor, Martinez, now works for Michigan State's Title IX office. She declined to comment on Schaner's case.

Another incident involved Travis Walton, the former player and assistant coach mentioned above who was charged with punching a student. He was allowed to stay on staff after that incident and was involved in an alleged rape - along with two players - shortly thereafter that was also swept under the rug.

Within that month, Walton's name would come up in another allegation involving a female MSU student. He and two basketball players -- who played for him in the NCAA tournament -- were named in a sexual assault report made by the woman and her parents to the athletic department, according to a university document obtained by Outside the Lines. The woman did not report the incident to police but told counselors and MSU athletic director Mark Hollis that she had been raped off campus by Walton and the two players.

Several weeks later, the woman and her mother met with Hollis and associate athletic director Alan Haller, who told them they had spoken with the coaching staff and were told the incident had been discussed with "the basketball team," according to the letter.

"None of the players were reprimanded in any way," the letter states. "The victim and her mother were told that there's not much that can be done to the players (except to increase awareness of sexual assault and 'intensify' the training program)."

The fact that nothing was done about both incidents and that none of Appling, Payne, Walton or the two unnamed players were reprimanded is absolutely shocking. With Hollis have already retired/resigned, Izzo's job is sure to come under fire for his role in these incidents.

Yet former Michigan State sexual assault counselor Lauren Allswede, who left the university in 2015 over frustrations about how administrators handled sexual assault cases, told Outside the Lines that MSU administrators' entire approach to such cases has been misguided for years. The biggest issue? Complaints involving athletes were routinely investigated and handled by athletic director Hollis' department, and sometimes even coaches, she says.

"Whatever protocol or policy was in place, whatever frontline staff might normally be involved in response or investigation, it all got kind of swept away and it was handled more by administration [and] athletic department officials," says Allswede, who worked at MSU for seven years. "It was all happening behind closed doors. ... None of it was transparent or included people who would normally be involved in certain decisions."

Essentially, Michigan State was trying to keep as many of these incidents as possible under wraps and from becoming public knowledge.

4) 16 MSU football players have been accused of sexual assault or violence against women
Outside the Lines found even more misconduct in the football program, as 16 players have been involved in such incidents during Mark Dantonio's tenure, including a number of incidents that went unreported.

Since Dantonio's tenure began in 2007, at least 16 MSU football players have been accused of sexual assault or violence against women, according to interviews and public records obtained by Outside the Lines. Even more, Dantonio was said to be involved in handling the discipline in at least one of the cases several years ago.

The previously unreported cases that Outside the Lines discovered include three reports of physical violence and three reported sexual assaults by football players. Each was investigated by campus police.

5) Mark Dantonio lied and said this was new ground when it comes to sexual assault cases and handling
A report made in January 2017 by a female student accused three football players of forcing her to perform oral sex on them during a party, and another report made in April detailed a defensive lineman who had sexually assaulted a woman at her home, and he was charged third-degree criminal sexual conduct as a result. All four players of those players were dismissed from the university, and in June, Dantonio answered questions about those two incidents.

"This is new ground for us," Dantonio answered. "We've been here 11 years -- it has not happened previously."

Well, given the fact that 16 football players have been accused of such actions going back to 2009 - including the six unreported incidents - we know it's not just those four.

The report states students told investigators that Michigan State athletes "have a reputation for engaging in sexual harassment and sexual assault and not being punished for it, because athletes are held in such high regard at the university." It also states that athletes received more training on sexual harassment and sexual assault than other students but noted possible mixed messages. It cites a program called "Branded a Spartan" about upholding the Spartan name. Some male athletes told investigators that "making a report about sexual assault might tarnish the Spartan brand," and at least one said he might not report an incident involving a fellow athlete to the Title IX office, according to the report.

In Michigan State's resolution agreement with the investigation, they promised to improve "Title IX staffing and resources, education and training" and to re-visit old cases, but there is no indication they took that agreement seriously. A Title IX lawsuit was filed against MSU by three women in 2015 for the school's mishandling of their sexual assault complaints.