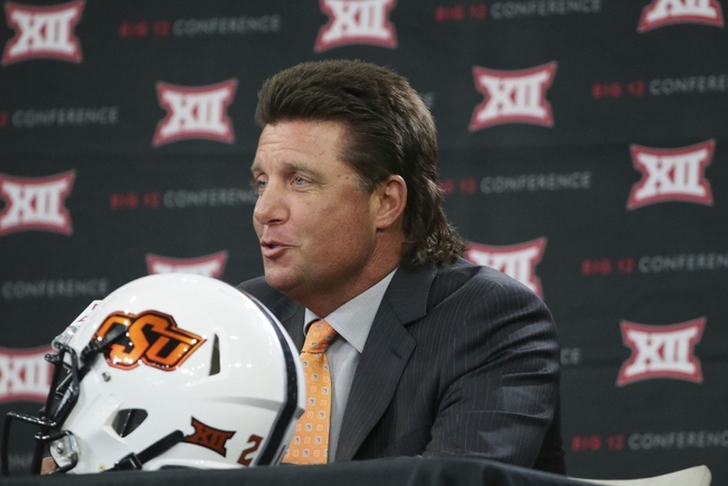 It certainly didn't take long for the college football coaching carousel to get going following the end of the regular season on Saturday. Arizona State, Nebraska, and Texas A&M fired their coaches this weekend, while Florida, Ole Miss, and UCLA all made head coaching hires. And, to top it all off, Tennessee did something no one had ever done in the supposed hiring, then un-hiring, of Ohio State defensive coordinator Greg Schiano. Here are all the latest coaching news & rumors you need to know:

Tennessee officials have reached out to Duke coach David Cutcliffe about the Vols' head-coaching vacancy, but Cutcliffe informed them he wasn't interested and plans to remain with the Blue Devils, sources told ESPN on Monday.

Cutcliffe is in his 10th season at Duke and previously spent 19 seasons as an assistant for Tennessee under former Vols head coach Phillip Fulmer.

Tennessee interviews Mike Gundy, have made him their top target
Despite being rebuffed by Cutcliffe, Tennessee has now identified Oklahoma State head coach Mike Gundy as their top target and have already interviewed him, according to Jimmy Hyams of Sports Radio WNML.

With Duke's David Cutcliffe and Iowa State's Matt Campbell out of the picture, Tennessee has turned its coaching search focus to Oklahoma State coach Mike Gundy. Three sources told me UT has interviewed Gundy, perhaps in Dallas. UT offered Gundy in 2012 but he said declined.

Tennessee hired Jones in 2012 after Gundy declined the job. He has been the Cowboys' head coach since 2005, going 113-53 in his tenure with one Big 12 title and one Big 12 Coach of the Year award. Oklahoma State can win 10 games for the fourth time in five seasons with a bowl victory.

The Bulldogs have posted a winning record in seven of the past eight seasons and can push their record to 9-4 this season with a bowl victory.