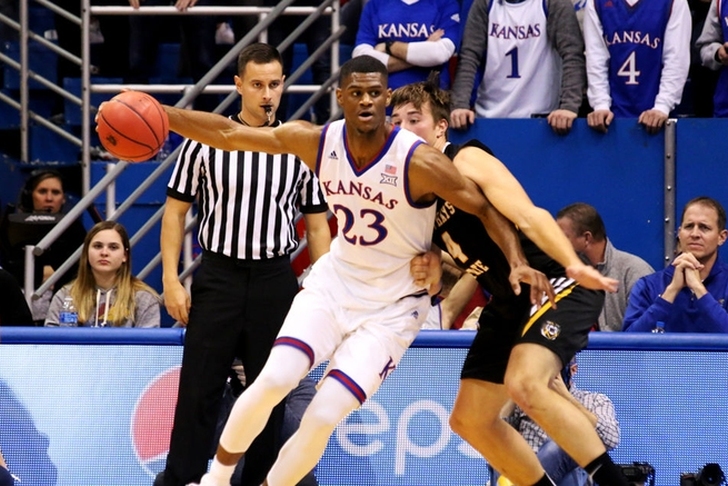 The college basketball season continues to roll along with a Saturday full of stacked games on tap following a week in which 14 ranked teams have already suffered a defeat. However, this Saturday has already given us plenty of news to get the day started, headlined by some clarity surrounding the playing status of five-star Kansas freshman Billy Preston. Here are all the latest college basketball news & rumors you need to know:

Billy Preston leaves Kansas, signs with pro team in Bosnia
Preston was expected to start for the Jayhawks this season, but he had yet to play this season while the school tried to get a “clearer financial picture” surrounding a car Preston was driving in a single-car accident in October.

Now, the No. 18 overall player in the 2017 recruiting class is ending his collegiate career before it ever really began by signing with BC Ikogea, a professional team in Bosnia.

“We are thrilled to welcome Billy Preston to our Club,” the club announced. “We watched him when he was in High School at Oak Hill Academy and in the McDonalds All-Star game. We are honored to have such a tremendous talent in our organization. We were watching his situation closely and reached out to his family to show interest and ultimately reached an Agreement with the family Attorney in California on a contract for the rest of the season. We know Billy is an NBA prospect so we will do our best to continue his development to help him excel for our club and fulfill his goal which is to be an NBA star in the near future.. Thank’s to Billy and his mother and of course his attorney Jeffrey B. Valle, we’ll be able to watch him live in Laktasi, Republic of Srpska.”

Kansas head coach Bill Self said in December that they expected to have Preston cleared for the start of Big 12 play, but that never happened.

“I can confirm that Billy Preston is foregoing his eligibility to play at Kansas and has signed with a professional team in Bosnia,” Self said in a statement. “Billy’s family has been very upfront telling us that his first choice was to stay at Kansas, but with the uncertainty of the situation they needed to look at other potential options. This opportunity in Bosnia came with a deadline for a decision, and the family reached that decision Friday afternoon.

“We are all disappointed that Billy never had the opportunity to experience college basketball competition but we certainly support him and wish him the best. Although he has been frustrated with the situation, Billy’s attitude has been tremendous and he has developed as a person and as a player. I’m sure that will continue as he prepares for his professional career.”

Preston plans to enter the 2018 NBA Draft, where he is projected to be a second-round pick.

Alkins, one of the best defenders in the country, is averaging 14.8 points and 4.3 rebounds per game this season.

This is an important game for both teams as they're tied atop the Pac-12 with 5-1 conference records. Tip-off is set for 4:00 p.m. ET on CBS.

The Spartanburg, SC native is picking between Clemson, Duke, Kansas, Kentucky, North Carolina, and South Carolina, with Clemson entering the night as the favorite.

Williamson reportedly wants to stay close to home and the Tigers - who are the closest to him - were also the first major school to offer him a scholarship. However, South Carolina is gaining some late momentum in his recruitment, pitching Williamson on the idea of playing alongside another five-star prospect in Louisville transfer Brian Bowen.

Kentucky is a favorite because of head coach John Calipari's proven track record of getting players to the NBA and one of Williamson's closest friends, five-star point guard Immanuel Quickley, has already committed to the Wildcats.