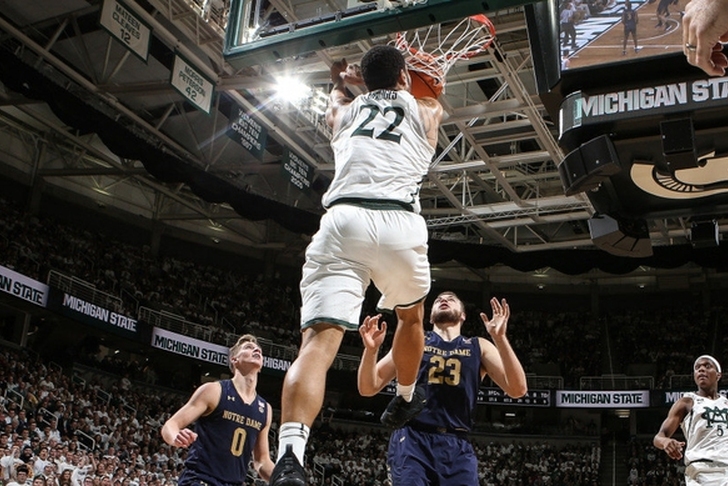 The college basketball reason really fell into a groove this week with a number of marquee games, headlined by the Big Ten/ACC Challenge. Of course, the Big Ten also started the first two games of conference play this weekend - which is an absolute joke.

If you're not aware, the Big Ten is having their conference tournament at Madison Square Garden this season because, for some unknown reason, everyone feels the need to have their tournament in New York City (the ACC is playing theirs at the Barclays Center).

However, the Big East always has their conference tournament at MSG, so the Big Ten has to have their tournament a week early, which led to this random weekend of conference play. And, with some teams being as inconsistent as you would expect them to be in the third full week of the season, it led to some weird outcomes.

Of course, the Big Ten wasn't the only team playing top-end games. Gonzaga handled a really good Creighton team, a short-handed Wichita State team beat Baylor on the road, and Xavier dominated Cincinnati in a game that included a fight between J.P. Macura and Bearcats coach Mick Cronin.

How do the top teams in the country stack up against each other? Here are my latest Top 25 Power Rankings:

25) Louisville Cardinals (4-2)
LW: 15
Louisville was one of two ACC teams to lose in the Big Ten/ACC Challenge, falling to Purdue on the road and then losing by two at home to Seton Hall. It's clear new head coach Dave Padgett is still trying to find his way.

24) Texas Longhorns (5-2)
LW: 25
Both of Texas' losses came to Duke and Gonzaga in overtime, showing that they are capable of hanging with the top teams in the country. However, their only notable win is over a Butler team that is going through somewhat of a rebuilding year. Up next? Shaka Smart's return to VCU on Dec. 5.

23) Texas Tech Red Raiders (6-1)
LW: 22
Texas Tech suffered their first loss of the season against a good Seton Hall team in their only game of the week. However, because of how good the Pirates are - and how good Texas Tech's defense is - they only drop one spot.

22) West Virginia Mountaineers (7-1)
LW: 24
WVU has won seven games in a row following their season-opening loss to Texas A&M and really saved themselves with a 16-point comeback win over Missouri to win the Advocare Invitational. The Mountaineers have yet to put a full game together, but when Jevon Carter (19.0 ppg, 5.5 apg, 4.8 rpg, 4.5 spg) is aggressive offensively, they're extremely tough to beat

21) TCU Horned Frogs (8-0)
LW: 23
TCU continues to roll along with blowout wins over Belmont and Yale this week. They'll be tested for the first time on Tuesday against SMU.

20) Cincinnati Bearcats (7-1)
LW: 12
Cincinnati was thoroughly handled on Saturday by cross-city rival Xavier as Trevon Bluiett had his way against the Bearcats, putting a black mark on them in their first real test of the season. They'll have a week to recoup before facing Florida this weekend.

19) Baylor Bears (5-2)
LW: 13
The Bears suffered their first two losses of the season this week, but one came at that red-hot Xavier team and the other came at home to a quality Wichita State team. Both were failed opportunities for Baylor to solidify themselves as a top team, but both were "quality losses."

17) Purdue Boilermakers (8-2)
LW: NR
Purdue has shaken off their terrible trip to Atlantis with wins over Louisville, Maryland, and Northwestern this week, all of whom are NCAA Tournament teams. 7-foot-2 center Isaac Haas finally found his rhythm over the weekend, averaging 23.5 points and 7.0 rebounds in their two Big Ten games.

16) Minnesota Golden Gophers (8-1)
LW: 14
Minnesota has a weird resume to this point. They have that quality win over Alabama, but they were playing 5-on-3 for the final 10 minutes of the game. Their only loss came at home, but it was to a very good Miami team. The Gophers are a solid group who will continue to be exploited by guard-dominant teams (291st nationally in three-point percentage defense).

15) Virginia Cavaliers (8-0)
LW: 17
UVA has quietly built one of the more solid resumes in the country with wins over VCU, Vanderbilt, and Rhode Island all away from home. Their defense has been as good as ever and will be tested again on Tuesday against West Virginia.

14) Seton Hall Pirates (7-1)
LW: 20
Seton Hall had as good of a week as anyone outside of Xavier, beating Texas Tech and Louisville - both of which were away from home. Desi Rodriguez (20.0 ppg, 4.9 rpg) has stepped up as this team's go-to guy in close games.

13) Gonzaga Bulldogs (7-1)
LW: 18
The Zags outscored Creighton by 24 points in the second half to win that game in blowout fashion, solidifying the Bulldogs has one of the best teams in the country. They're one of eight teams that rank in the top 20 in both adjusted offense and defense, according to KenPom.com, and will face another one of those eight on Tuesday in Villanova. Game of the week?

12) Xavier Musketeers (5-1)
LW: 19
We've talked a lot about Xavier already, but there aren't enough good things you can say about them after this week. Those wins over Baylor and Cincinnati were both by 13 points as Trevon Bluiett (20.8 ppg) has their offense, which ranks fourth nationally in both effective field goal percentage and adjusted offensive efficiency, playing at a very high level.

11) Miami Hurricanes (7-0)
LW: 11
Miami passed their first test of the season by going to Minnesota and controlling the game against the Golden Gophers in a 86-81 win. They needed that victory to prove the preseason hype was merited as they won't be tested again until the start of conference play.

10) North Carolina Tar Heels (8-1)
LW: 10
Luke Maye (20.8 ppg, 10.3 rpg) continues to be the biggest breakout star of the season and is a legitimate National Player of the Year candidate. The Heels also rebounded from their offensive disaster against Michigan State with double-digit wins over Michigan, Davidson, and Tulane.

9) Notre Dame Fighting Irish (7-1)
LW: 7
Another team that had a disaster against the Spartans, the Irish went down by 20 points early in the first half against Michigan State and never recovered. The win over Wichita keeps them in the top 10, but losing in that fashion definitely killed a lot of the buzz around the Irish.

8) Texas A&M Aggies (7-0)
LW: 9
The Aggies have been the biggest breakout team of the season with wins over West Virginia and USC - both away from home - on their resume. They've also won every game by at least 11 points, showcasing a rare consistent level of dominance. A showdown against Arizona on Tuesday is looming.

7) Kentucky Wildcats (7-1)
LW: 6
Kentucky looks like they've settled into a groove and are starting to find their way. Their early-season struggles are in the rearview mirror thanks to their defensive improvement, as they now rank in the top 10 nationally in adjusted defensive efficiency. They won't play again until they host Monmouth this weekend, then have a tough three-game stretch against Virginia Tech, UCLA, and Louisville leading into conference play.

5) Wichita State Shockers (6-1)
LW: 8
Had Wichita State lost to Baylor, they would've gone into AAC play without a marquee non-conference win. Now they have a big road win - without last year's leading scorer and rebounder in Markis McDuffie - to boost their resume. Landry Shamet (13.7 ppg, 3.7 apg) continues to be one of the best point guards in the country.

3) Villanova Wildcats (8-0)
LW: 2
Villanova drops through no fault of their own, blowing out Big 5 rivals Penn and St. Joseph's this week. The most reliable team in the country will face Gonzaga at MSG on Tuesday in their last big test before conference play.

2) Michigan State Spartans (7-1)
LW: 4
Since losing to Duke, Michigan State has won six games in a row by an average of 21.5 points per game - and that includes games against North Carolina and Notre Dame. And, they've done all of that despite the relative struggles of Miles Bridges, who has yet to really have a good game this season. They're looking like the national championship favorite we expected them to be.

1) Duke Blue Devils (10-0)
LW: 1
Duke added to their impressive resume with a tough road win over Indiana as Marvin Bagley III (22.0 ppg, 11.2 rpg) leads the nation with eight double-doubles. The bulk of their non-conference schedule is now done with only games against St. Francis (PA) and Evansville remaining.