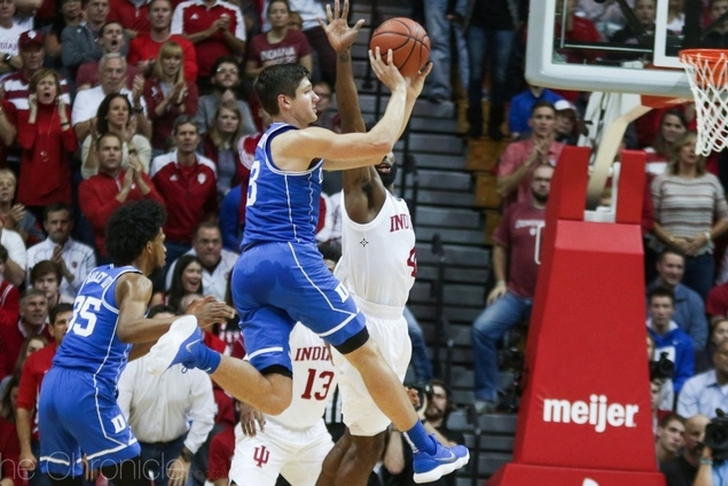 The college basketball season continues to roll right along, providing us with nightly entertainment. Of course, at this point in the season, plenty of questions are arising as to teams that are overachieving, underachieving, and who can truly compete for a championship. We're going to be posting these every Friday throughout the course of the season to try and help answer those questions. Hit me up on Twitter or Facebook if you want to join the conversation! Now, let's get into it:

did the acc beatdown of the big 10 stun you.

Yes and no. The ACC won the Big Ten/ACC Challenge 12-2, with the lone wins for the Big Ten coming from Purdue's home victory over Louisville and Michigan State's beatdown of Notre Dame. We knew this was going to be a down year for the Big Ten and the ACC might be the best conference in the country (again), so it's not a shock they won the challenge in convincing fashion.

It is, however, very telling about the middling teams in the Big Ten. Maryland and Northwestern, two teams projected to finish in the top five in the Big Ten, both lost to teams in the bottom half of the ACC. Outside of Michigan State, the conference looks to be downright terrible.

How concerned should Northwestern fans be/how many Big Ten wins will they need to be in at-large range given B1G’s weakness and NU’s lack of quality OOC wins?

Northwestern is lucky that they built up credibility during last year's tournament run because if they land on the bubble (which it's looking like they will), that will help with the committee. I wouldn't be concerned yet, though. There are plenty of opportunities for wins in the Big Ten, especially good wins given the inconsistencies of Purdue and Maryland. If they can get to 11 conference wins, they'll get in (assuming they avoid a terrible loss or two).

Duke and Michigan State feel like they're just better than everyone else. Is there anyone close to those two? - Jacob Holland (@JacobHolland3)

Yes. Duke has clearly been the most impressive team so far this year with their win over Michigan State (without Marvin Bagley) and in the PK80, while the Spartans certainly rebounded from their loss to Duke by winning their PK80 bracket and blowing out Notre Dame. But they aren't the only two teams I'd put in the top tier.

Kansas has to be up there even though they didn't look all that great against Kentucky. They still found a way to win that game and have been dominating everyone else. With Svi Mykhailiuk (18.2 ppg) and Lagerald Vick (15.8 ppg, 6.8 rpg) stepping into major scoring roles along with Devonte' Graham (15.8 ppg, 8.5 apg), the Jayhawks look good.

The same goes for Villanova, who won the Battle 4 Atlantis and keeps rolling through whoever they play. Their business-like approach has made them the most reliable team in the country.

So that's my top group right now, with Florida close to breaking into that tier because of how good their offense is.

Just curious?? Do you want him out?? Expect him to be out?? If so, any replacements in mind??

The "him" Jeff is referring to is Kevin Ollie, asking about him being on the hot seat following UConn's 77-73 overtime win over Columbia. That came on the heels of a 20-point loss to Michigan State and embarrassing 35-point loss to Arkansas in the PK80. According to some people I've talked to with knowledge of the program, Ollie is coaching for his job this season. It's NCAA Tournament or bust.

Besides the top recruits + Bridges, who are the “under the radar” NBA prospects we should be watching in college? - @Ppuro31

Love this question. I know you've heard all about Marvin Bagley III, Michael Porter Jr., and DeAndre Ayton, and probably a little bit about Luka Doncic, all of whom will make the top of the draft very strong. This isn't a deep class, but there are a few players that either can or are playing their way up draft boards and can be quality NBA players.

Kentucky's Hamidou Diallo, who enrolled early and tested draft waters last year without ever playing a game for UK before returning to school, is intriguing because of his elite athleticism.

Villanova's Mikal Bridges has probably helped himself more than anyone else this year with his offensive improvement (17.9 ppg). He was always a great defender but is now flourishing in a bigger scoring role, making 2.4 three-pointers per game. Bridges looks like he has upside as a 3-&-D prospect.

Miami's Bruce Brown Jr. has yet to have the breakout season we expected as he's struggled to shoot the ball but has flashed the all-around game (10.8 ppg, 8.7 rpg, 5.3 apg) that makes him an intriguing prospect as a 6-foot-5 guard on a good Hurricanes team. Brown's that fringe lottery pick who could go either way but has the skills to make an impact where ever he goes.

And then, though he's not exactly an "under the radar" guy, Grayson Allen's NBA prospects are rising. He has all of the tools offensively and has shown this year that he can shoot off the bounce and create his own shot. With so much uncertainty outside the top 10 or 11 prospects, Allen could very easily sneak himself into the top half of the first round if he keeps playing like he is.

What’re your thoughts on Yurt? Is he the softest center in D1?

This question is in reference to Omer Yurtseven, a sophomore big man from NC State who returned to school after testing the NBA Draft waters last year. He likely would have been a second-round pick had he left, but returning hasn't helped his draft stock. Despite his skills (Yurtseven has a polished past game with good touch on his jumper and is a good passer), he doesn't start because he suffers from the Skal Labissiere syndrome - he gets pushed around way too easily on the block.

He's not the softest center in D-I, but that's the biggest thing keeping him from being a first-round type talent.