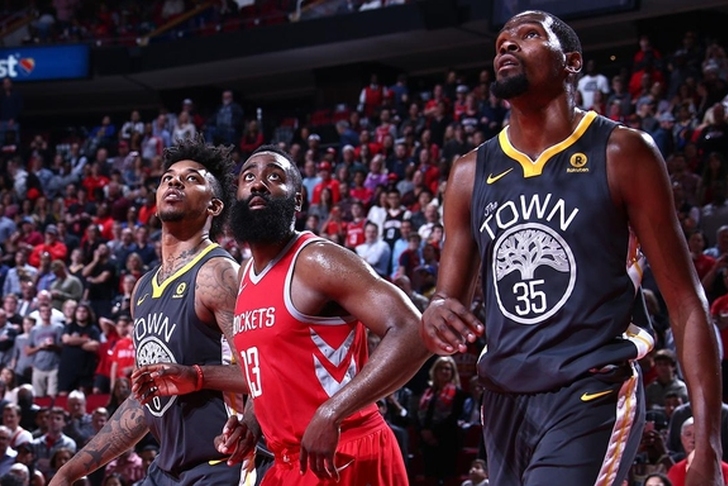 The Houston Rockets picked up a thrilling 116-108 win over Golden State Warriors, clinching the season series for Houston. That means the Rockets own the tiebreaker over Golden State for the No. 1 seed if they finish with the same record. However, it was the last meeting of the season between the two, meaning we likely won't see them face off until the Western Conference Finals - should they both get there. Here are the four biggest things we learned from the game:

1) A Rockets-Warriors Western Conference Finals would be a really good series
How much fun was last night? Both teams went blow-for-blow and matched runs, keeping the game close throughout. One thing that was abundantly clear, however, was that Houston has the firepower to hang with the Warriors. Golden State can usually rely on one or two back-breaking runs to get past any pesky opponent, but the Rockets were able to match their offense, which kept those overwhelming runs from really developing. If they meet in the playoffs, it will be nothing short of a heavyweight fight.

2) Houston has the backcourt to compete with Golden State's backcourt
The biggest reason why the Rockets were able to do that is due to how good their backcourt is. Harden wasn't his overly dominant self (22 points, eight assists), but Chris Paul (33 points, 11 rebounds) picked up the slack. Those two combined for 55 points on 50 percent shooting while Stephen Curry and Klay Thompson combined for just 27 points on just 29 percent shooting. Obviously, that's a hugely off night for the Splash Brothers, but some of that can be credited to the defense Paul and Harden played - and the fact that they made both work on defense. Paul and Harden may not be as good as the Splash Brothers, but they're awfully close and showed that on Saturday.

3) There's bad blood!
There wasn't necessarily bad blood in this game, but all of the ingredients are there for a heated battle in the postseason.

"We're confident because we know if we're doing what we're supposed to do, we're going to beat them," Rockets center Clint Capela told ESPN. "We've got to keep playing. We know that they're going to come back if we have the lead, and we've just got to keep that mindset. Sometimes I feel like, in the past, we were all dragging down after mistakes. But today, we were ready. I think that if we're doing what we're supposed to do on defense -- all the switches, the weak side -- and keep playing our offense by keeping that mentality all game long, we have the weapons to beat them.

"We are better than them."

4) Golden State isn't panicking
This game meant more to the Rockets - who are trying to prove themselves to the Warriors - than it did to Golden State, and the Warriors seemed to acknowledge that after the game.

"The season starts over when you're in the playoffs anyway, so it doesn't matter," Kevin Durant said. "You're going to have to get through these teams to get to where you want to go. You have to play at home and on the road, so it really doesn't matter. We just want to be playing good basketball when it comes down to that point."

"It's game 40-what? Seven, eight?" Draymond Green asked after the game. "Who we play on Tuesday? We just got to get ready for [New York]. Home court will take care of itself down the road."

All in all, this is not the same Warriors team we'll see in the playoffs when they'll be much more motivated.