Preseason NBA Power Rankings: After All The Offseason Movement, Who Are Golden State's Biggest Challengers? 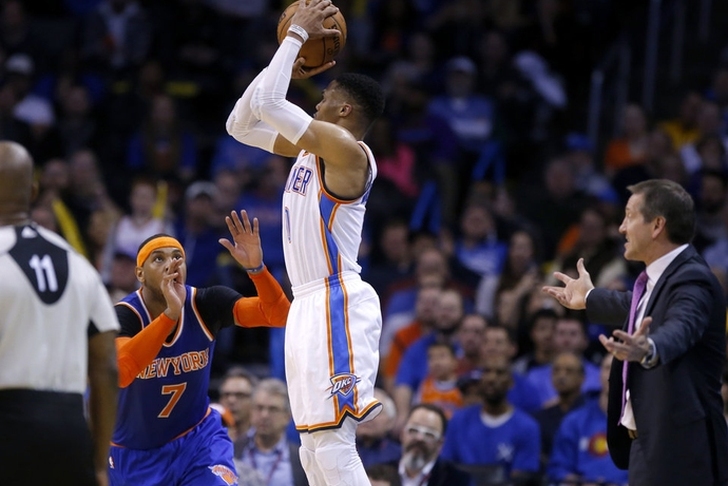 Can you remember a crazier NBA offseason?

We had pre-free agency trades that saw superstars like Chris Paul, Jimmy Butler, and Paul George change teams. Free agency then provided its usual drama with Gordon Hayward leaving for the Boston Celtics - but we weren't done. Boston made headlines again by trading for Kyrie Irving last month, the Oklahoma City Thunder improved by acquiring Carmelo Anthony in a trade with the New York Knicks. And now, the Cleveland Cavaliers added more firepower by signing Dwyane Wade after he reached a buyout with the Chicago Bulls.

Despite all that movement, the Golden State Warriors are still the team to beat this year - but who are their biggest challengers? Find out in our new preseason NBA Power Rankings.

30) Brooklyn Nets (2016-17 record: 20-62)
Sorry, Nets fans, it's still going to take time before you're good again. Despite moves to add D'Angelo Russell and other quality players, Brooklyn has a long, long way to go. They'll be much better than the dumpster fire they were last season, but they'll still be among the worst teams in the NBA.

29) Orlando Magic (29-53)
The Magic will seriously compete with the Nets for the worst record in the league with no star and no clear direction. Jonathan Isaac and Aaron Gordon look like they can become cornerstones for Orlando in the frontcourt, but the rest of their roster is a major work in progress.

28) Atlanta Hawks (43-39)
Head coach Mike Budenholzer has taken after his mentor Gregg Popovich in regards to getting the most out of his team - the problem is, next year's team doesn't have much to give. Dwight Howard, Paul Millsap, and Tim Hardaway Jr. are all gone as the Hawks start a rebuild of their own. Young players like rookie John Collins and Taurean Prince give them something to build on, but it's not much.

27) Chicago Bulls (41-41)
The Bulls gave the Celtics a run in the playoffs, but after trading Jimmy Butler to the Timberwolves, they're in for a major rebuild. This season will be about identifying core players for the future because there aren't going to be many wins.

26) Indiana Pacers (42-40)
With no Paul George, the Pacers are going to be bad. Myles Turner needs to step up and become a go-to player since he's the most talented guy on the team and the roster around him is very much a work in progress. The Pacers are in danger of being in the worst spot in the NBA: not bad enough to get the No. 1 pick, but not good enough to actually compete.

25) New York Knicks (31-51)
The Knicks finally got rid of Carmelo Anthony and can officially start their rebuild. We finally get to see Kristaps Porzingis be the focal point of an offense and rookie Frank Ntilikina will see a lot of playing time. They were going to be bad even with Carmelo - at least now they can start moving forward.

Expect these six teams to be at the bottom all season long.

24) Phoenix Suns (24-58)
The Suns have plenty of talent, but they're still growing. Phoenix simply isn't ready to make any major moves up the standings in the loaded Western Conference even though players like Devin Booker and Josh Jackson give the Suns a bright future. They're trending in the right direction, but as the youngest team in the league, they need time to grow.

23) Sacramento Kings (32-50)
Sacramento had an incredible offseason with quality draft picks and veteran signings, but this group still has a long way to go before they'll start winning games. The Kings will be improved and the future will look bright, yet their starting lineup just simply isn't good enough to consistently win against quality competition.

22) Los Angeles Lakers (26-56)
Look for the Lakers to make a small jump this year. There's plenty of young talent for Los Angeles, including Lonzo Ball, Julius Randle, and Brandon Ingram, but let's not get ahead of ourselves. The Lakers are likely a year away from making a real playoff push.

21) Dallas Mavericks (33-49)
The Mavericks have a strong roster with aging pieces like Dirk Nowitzki, high-priced players like Harrison Barnes and a promising young rookie in Dennis Smith Jr. However, they're stuck in no-man's land right now - not good enough to make the playoffs and not bad enough to finish near the top of the lottery. With a limited ceiling, the Mavs rank lower than their record from last year says they should (especially in the West).

20) Detroit Pistons (37-45)
The Pistons current roster setup doesn't allow for many additions unless the club wants to blow it up. With trade rumors around Andre Drummond and Reggie Jackson, that very well could be the case. If the Pistons trade away a key player, they'll likely drop down this list. Right now, they're looking at bottom playoff seed at best.

19) Utah Jazz (51-31)
Without Gordon Hayward, the Jazz are going to have a very tough time making the playoffs. That said, players like Rudy Gobert, Joe Ingles, and Rodney Hood will keep them from being a disaster.

18) Philadelphia 76ers (28-54)
The Process has produced talented young pieces in Markelle Fultz, Joel Embiid, Ben Simmons and Dario Saric. Trusting that process has put the 76ers on the right path, but the health of their core is a major concern. Everyone is expecting them to compete for a playoff berth, which they may very well do, but it's important to remember that they're a very young team. There will be growing pains.

17) Miami Heat (41-41)
Miami went 30-11 over the last half of the season and essentially return the same roster (though the addition of Kelly Olynyk is a boost), showing the front office's confidence they can repeat that success. I think they're a bottom seed in the playoffs.

16) Charlotte Hornets (36-46)
The Hornets have a chance to be a sleeper team in the Eastern Conference. Hampered by injuries last year, they spent this offseason addressing their needs. Charlotte found a quality center in Dwight Howard (yes, he's not the player he once was but is still in the top half at the position), and added a significant offensive boost to their bench in Malik Monk. If Kemba Walker continues to play like an All-Star and Nic Batum returns to form, this group could take advantage of the weak East.

15) Portland Trail Blazers (41-41)
I wasn't a huge fan of the Zach Collins pick as he'll still need a few years before being able to contribute significantly, but Portland's core will keep them in the playoff picture. Damian Lillard and C.J. McCollum are both great, but it's fair to question if the Blazers can win big without much talent around them.

14) Memphis Grizzlies (43-39)
Memphis always seems a bit underrated. They frequently compete against better teams, even when they're injured. However, it may be time for a teardown and rebuild. A core of Mike Conley and Marc Gasol just isn't good enough to make a deep playoff run.

13) Denver Nuggets (40-42)
The Nuggets just missed out on the playoffs last year, and with the addition of Paul Millsap, they expect to make it this year. This team has plenty of talent, much of it young, and their success will depend on the continued growth of those young players.

12) New Orleans Pelicans (34-48)
Most of the NBA is zigging with the small ball trend, so the Pelicans are zagging with a pair of bigs in DeMarcus Cousins and Anthony Davis. The Pelicans weren't great after their big trade for Boogie, but it was mid-year and they were already playing catchup. They should fulfill their potential with a whole offseason and training camp to work together. Unfortunately, the Pelicans don't have enough around those two players for them to really be a contender.

11) Milwaukee Bucks (42-40)
The Bucks are a promising young team and they seemed poised to make the leap this year. There's plenty of young talent, headlined by Giannis Antetokounmpo. Hopefully, Jabari Parker can stay healthy, too. The Bucks aren't ready to take down the Cavs or Celtics, but they are trending upwards.

10) Los Angeles Clippers (51-31)
Losing Chris Paul hurts and will keep the Clippers out of the top of the West, but they won't have to worry about missing the playoffs. They brought Blake Griffin back and acquired some very good players (in underrated moves, I might add) in Patrick Beverley, Lou Williams, Sam Dekker and, most importantly, Danilo Gallinari. Los Angeles isn't a contender, but they'll be fine.

9) Toronto Raptors (51-31)
What exactly does Toronto have left? Re-signing Kyle Lowry and Serge Ibaka was great, but this team appears to have hit their ceiling.

8) Washington Wizards (49-33)
The Wizards have a starting lineup that can compete with anyone. That said, their bench is a major issue, as we saw against Boston in the playoffs last year. John Wall is one of the best point guards in the NBA and the Washington tried to give him some help by adding bench players Tim Frazier and Jodie Meeks. How much of a boost will they provide?

7) Minnesota Timberwolves (31-51)
Minnesota still has their promising young core of Andrew Wiggins and Karl-Anthony Towns and added some MAJOR upgrades in Jimmy Butler, Jeff Teague, and Taj Gibson. Suddenly, this team went from a fringe playoff team to a real contender. It may take them a while to adjust to playing together, and they need to improve defensively, but they have a very, very high ceiling.

6) San Antonio Spurs (61-21)
Had the Spurs not lost Kawhi Leonard in Game 1 of the Western Conference Finals, they surely win that game against the Golden State Warriors and maybe more. However, they didn't make any additions and lost a key bench player in Jonathon Simmons. It's never smart to doubt Gregg Popovich, but it looks like the Spurs took a step back this summer. Still, they'll win 50-plus games and be a top 5 team.

5) Boston Celtics (53-29)
Boston became a legit title contender when they added Gordon Hayward, and some think of them as a favorite now with Kyrie Irving. I don't think so. They got worse defensively and didn't get significantly better on the offensive end - but Brad Stevens now has more to work with than he ever has. If he can get the most out of Irving, Boston will be extremely dangerous.

4) Cleveland Cavaliers (51-31)
Is it possible to trade a guy like Irving and actually get better? Yup - and I break down why here. Isaiah Thomas will never be a good defender, but Kyrie was almost as bad. He's also capable of replacing Kyrie's production on the other end, taking some pressure off LeBron. And Crowder is still a damn good defender, which the Cavs need. Wade is another nice piece and go-to crunch time scorer, solidifying them ahead of Boston in these rankings.

3) Houston Rockets (55-27)
Adding Chris Paul put Houston into the conversation as the biggest threat to the Warriors. And, they were able to add him while keeping Clint Capela, Trevor Ariza, Eric Gordon and Ryan Anderson. It will take time for Paul and James Harden to figure out how to play together, but by the end of the season, they'll be extremely dangerous.

2) Oklahoma City Thunder (47-35)
The Thunder were a one-man-band last year with Russell Westbrook. Now? He has two superstars to play with in Paul George and Carmelo Anthony. It will be interesting to see how these three players mesh, especially considering Westbrook and Anthony's tendencies to play isolation basketball. That said, I think they have the most talent of any team not named Golden State.

1) Golden State Warriors (67-15)
Well, duh. No explanation required: the Warriors are the only team that can take the top spot.