Who Won The Cavs-Celtics Blockbuster Trade? Breaking Down Every Angle & What To Make Of It 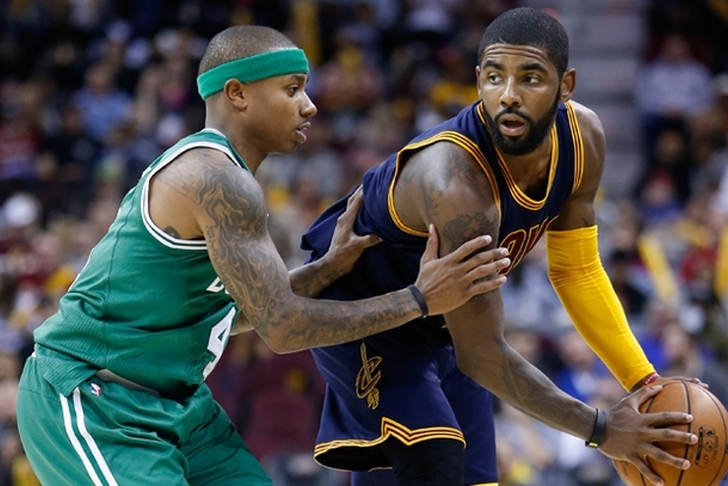 The NBA offseason provided one more stunner on Tuesday night with the Boston Celtics acquiring Kyrie Irving in a blockbuster trade with the Cleveland Cavaliers.

It was a move that had been brewing since Irving demanded a trade from the Cavs last month. Though the Phoenix Suns emerged as the early favorite to land him, Boston was the only team Cleveland had serious conversations with over the last few weeks.

Here's the full details of the trade:

So, what does this deal mean for both sides? There are multiple factors that will determine the success of the trade. Let's start with the biggest one - the swap of Kyrie Irving and Isaiah Thomas.

Boston has had their eye on acquiring a superstar through a trade for the past two years and they think Irving will form a championship-level "Big 3" with Gordon Hayward and Al Horford. Thomas is also set to be a free agent after the season and is expected to demand a max contract on the open market, something the Celtics didn't want to give him. As such, they went out and acquired one of the best point guards in the league - someone they are willing to give max money to (Irving can be a free agent in 2019 and plans to re-sign with Boston).

However...what's the real difference between Irving and Thomas? Here are their stats from last season:

It's worth mentioning that Thomas also led the league in fourth quarter scoring last year and nearly became just the fourth player in NBA history to average 29 points or more while taking less than shots per game (the three players - Shaquille O’Neal, Karl Malone, Adrian Dantley - who did are in the Hall of Fame).

Defensively, there also isn't much difference between the two. Thomas is loathed for being arguable the worst defender in the league due to his diminutive size (5-foot-9), but Irving ranks near the bottom of virtually every defensive category as well. It's essentially a wash.

That doesn't mean they're the same players. Irving is the more skilled offensive player and is just entering his prime while Thomas isn't expected to be able to repeat last season's success - though he's been playing at a very high level for the past two and a half seasons.

Boston is hoping they're getting the Kyrie Irving of the last three years instead of the inefficient version we saw before LeBron James returned to Cleveland. Injuries have always been an issue with Irving - he has missed 111 games in his six-year career - and there's no doubt he benefitted from facing defenses that were designed to stop someone else.

Boston is banking on the thought that Irving will blossom on his own and that the improvement we've seen from him over the past three years is part of his development rather than playing alongside LeBron James. Playing under Celtics head coach Brad Stevens, who always seems to get the most out of his players, will help with that. Yet, legitimate questions still remain about Irving's ability to be "the guy."

Why is that the case? Inefficient offense and poor defense. Irving is an isolation-heavy offense player, running iso sets 409 times last season (compared to 248 times for Isaiah Thomas), which usually led to bad shots or stagnant offense. It's also not something the Celtics do very often under Stevens. On the other end of the floor, the Cavs allowed 107.1 points per 100 trips with Irving-led lineups while giving up just 102.7 per 100 possessions with him on the bench.

The end result is that those Irving-led lineups (with LeBron on bench or not playing) have been outscored by 2.1 points per 100 possessions.

That begs the question - how much of an upgrade is Irving over Isaiah Thomas? Not enough to warrant a trade of this magnitude. Plus, Thomas will likely have the most efficient season of his career playing next to LeBron. That's what James had done for the players around him throughout his career. And, Thomas has proven he can carry a team on his own, which will prove helpful and allow James to get more rest throughout the season.

As such, the loss of Irving isn't one that is going to cripple the Cavs or keep them from being competitive in the East. Thomas figures to replace a good amount of Irving's production, and the other pieces actually allow Cleveland to matchup better against the Warriors should they meet again in the Finals.

We already discussed how Irving and Thomas are both major defensive liabilities, but Jae Crowder gives the Cavs another lockdown wing defender. Cleveland can put him on Stephen Curry, allowing LeBron to defend Kevin Durant and Iman Shumpert to stick with Klay Thompson. That's as good of a trio for defending the Golden State model as you'll find in the league.

This move also helps the Cavaliers prepare for an uncertain future. With Irving wanting out and James refusing to commit to the franchise beyond this season, they have insurance that they won't be left with nothing again a la when LeBron left for the Miami Heat. Thomas is an All-Star, Crowder is one of the league's best role players and perimeter defenders, Zizic has some upside and the first-round pick is projected to give them a top three selection in another draft class that is loaded at the top.

Marvin Bagley III, Michael Porter Jr. and Luka Doncic are all projected to be franchise-caliber players, and - barring a miracle season from Brooklyn - they'll be able to get one of those guys and build their future around them.

Cleveland made the very best out of a bad situation with Irving, getting an All-Star replacement and a draft pick that will serve as the building block for their future. They're still going to be in the Eastern Conference Finals and are better equipped to handle the Warriors.

Boston's outlook is a bit more tricky. Irving is the player you'd rather have moving forward, and the fact they didn't have to give up No. 3 overall pick Jayson Tatum was huge. They still have a plethora of future first-round selections and now have a core of legitimate stars. They accomplished their goal in that regard.

Is it enough for the Celtics to overtake the Warriors and win a championship? No - at least not right now. They got worse defensively and didn't get significantly better on the offensive end - but Brad Stevens now has more to work with than he ever has. If he can get the most out of Irving, Boston will be extremely dangerous.

Who won the trade? It's complicated. Both teams accomplished what they wanted to. Right now, I'd give the nod to the Cavs - but the jury is still out.