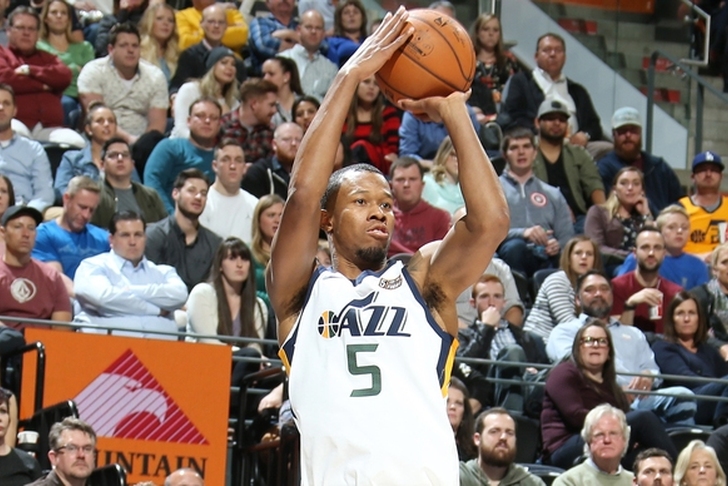 The NBA Trade Deadline is fast approaching on Thursday, and as such, the trade market is really starting to heat up. A number of teams - namely the Cleveland Cavaliers, Los Angeles Lakers, and Oklahoma City Thunder - have extremely active and aggressive in hopes of getting deals done over the next few days, but several others are also looking to strengthen their rosters before the playoffs. Here are all the latest NBA trade rumors you need to know:

Thunder, Pistons among teams interested in Rodney Hood
The Utah Jazz placed Rodney Hood on the trade block last month and both the Oklahoma City Thunder and Detroit Pistons are interested in acquiring him, according to Tony Jones of the Salt Lake Tribune.

League sources say the Denver Nuggets and Orlando Magic have also shown at least a passing interest in Hood, who is set to be a restricted free agent this summer. Hood's name has been mentioned in trade talks for a few weeks, and the Jazz have been active on the market in an attempt to fortify their roster for the remainder of the season.

The Jazz would like an asset for Hood, according to sources. A first round pick would be optimal.

Hood is averaging 16.4 points per game while shooting 38.7 percent from three-point range.

Nuggets working on deal for Marcus Smart
The Boston Celtics have made guard Marcus Smart available for a first-round pick, and the Denver Nuggets are exploring trade possibilities for him, according to Marc Stein of the New York Times.

Denver is among the teams that has explored Marcus Smart trade scenarios with Boston, according to league sources. Emmanuel Mudiay has been made available, sources say, but the Celts covet a first-round pick for Smart

Smart is averaging 10.1 points and 4.7 assists per game this season.

Here's what Cleveland is offering the Clippers for DeAndre Jordan
The Cavs have been at the forefront of trade discussions for Los Angeles Clippers center DeAndre Jordan and continue to be one of the favorites to land him. However, they're only willing to offer their own first-round pick and the "unwanted money" of Tristan Thompson and J.R. Smith for Jordan, according to USA Today's Sam Amick.

Cavs general manager Koby Altman is trying hard to shed the contracts of Tristan Thompson (two years, $36 million remaining) and J.R. Smith ($14.7 million next season, team option worth $15.6 million in 2019-20 with $3.8 million guaranteed), two players who were re-signed in large part because of LeBron’s omnipresent influence. They’re all represented by Rich Paul of Klutch Sports, who built the agency with a huge assist from James. As it pertains to the Cavs’ interest in the Clippers’ DeAndre Jordan, a person with knowledge of that situation said Cleveland continues to offer only its own first-round pick and this kind of unwanted money in those stalled negotiations.

Jordan is averaging 11.6 points and 14.9 rebounds per game this season.

RELATED: 5 Teams That Are Buying At The NBA Trade Deadline

Representatives for New York Knicks center Willy Hernangomez requested for him to be traded ahead of Thursday’s deadline, league sources told Yahoo Sports.

Hernangomez’s representatives informed Knicks officials of the trade request in recent days, league sources said, seeking a team in which he can continue his development as a young NBA center.

The Jazz and Spurs are known to be interested in his services.