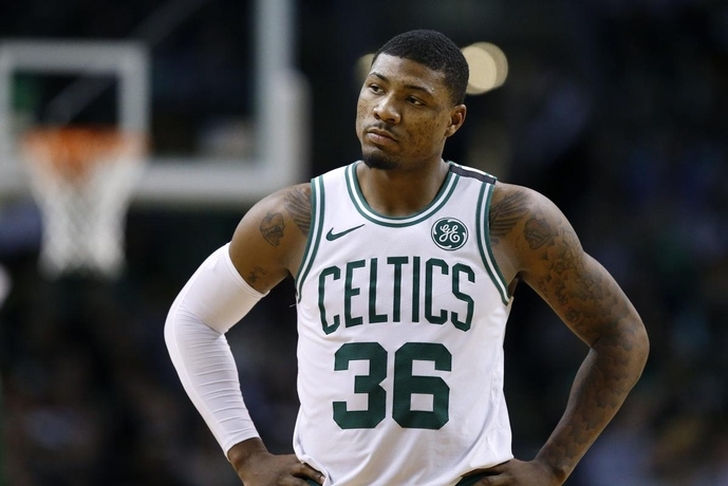 The NBA Trade Deadline is fast approaching on Thursday, and as such, the trade market is really starting to heat up. A number of teams - namely the Cleveland Cavaliers, Los Angeles Lakers, and Oklahoma City Thunder - have extremely active and aggressive in hopes of getting deals done over the next few days, but several others are also looking to strengthen their rosters before the playoffs. Here are all the latest NBA trade rumors you need to know:

Celtics open to trading Marcus Smart?
The Boston Celtics were thought to be buyers at the deadline, but they have made guard Marcus Smart available for a first-round pick, according to ESPN's Adrian Wojnarowski.

“You talk about Marcus Smart, he’s a player that’s available for a first-round pick. If a team was willing to give Boston a first, Boston would look at,” Wojnarowski said in the latest edition of his podcast with Bobby Marks. “If they didn’t have to take back a lot of money going out in the future. He’s restricted this summer, you don’t know what it will cost to keep him.”

Smart is averaging 10.1 points and 4.7 assists per game this season.

76ers targeting Tyreke Evans
Tyreke Evans is being openly shopped by the Memphis Grizzlies and is widely expected to be playing elsewhere after the deadline thanks to his production and team-friendly contract. Several teams have expressed interest in him because of that, and the Philadelphia 76ers are throwing themselves into the mix, according to Vincent Goodwill of NBC Sports Chicago.

Philadelphia, a team looking to solidify a playoff spot in the East, is showing interest in Tyreke Evans, according to sources

Evans, who is being held out by the Grizzlies in anticipation of a move, is averaging 19.5 points, 5.0 rebounds, and 5.0 assists per game this season.

In fact, with league sources indicating that talks centered on Robin Lopez have intensified and also that the Bulls and Thunder have discussed at least Tony Allen’s expiring contract, management will be busy between now and Thursday’s trade deadline.

It’s obvious the Bulls are keeping the expiring deals of Nelson and Allen in play as part of larger packages. Sources have indicated for weeks that Jerian Grant also is available.