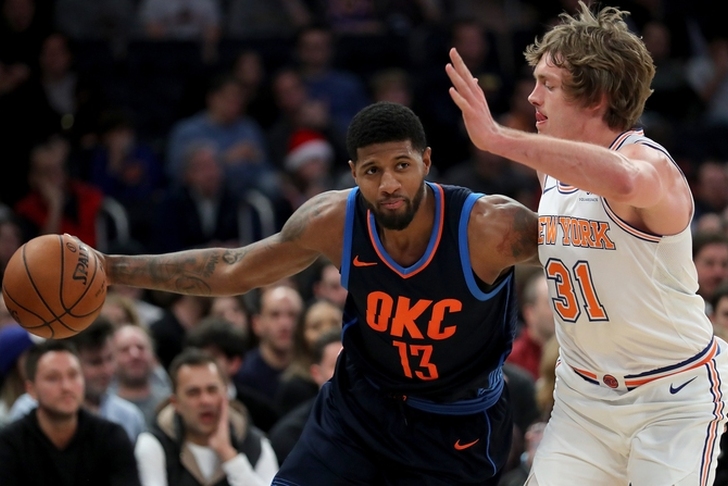 The NBA season is churning right along with the All-Star break and trade deadline fast approaching, rumors are flying about which players could potentially be moved and what may happen this offseason. While contenders have been the most active on the trade market to this point, a few fringe playoff teams are looking to strengthen their roster in order to help ensure a postseason berth. Here are all the latest news & rumors you need to know:

Paul George staying with Thunder?
The Oklahoma City Thunder acquired Paul George in a trade with the Indiana Pacers this offseason after he openly expressed a desire to sign with the Los Angeles Lakers in free agency this offseason in a gamble that they would hopefully be able to lock the former All-Star up long-term.

Many thought the Thunder may look to trade George at the deadline if he didn't commit to signing that extension, but the team has said they won't do that. Now, following Russell Westbrook's comments in which he ripped the All-Star selection process for not picking George (a notable snub from this year's game), George said that the decision about his future has been made "easier."

"Russ is the reason why this decision is becoming even more easier to make, is the character Russ [has]," George said on Wednesday. "A stand-up guy, and he has his teammate's back.

"It was awesome for a teammate to have your back and to stand up. And to be honest, he should be a starter. He's been the MVP, been the best player at his position. He should've been a starter, but that's another story. But the fact Russ had my back, that's my guy forever, and it's more apparent what this decision needs to be made when it comes down to it."

Reading the tea leaves, it seems like George is ready to stay with the Thunder. He is averaging 20.9 points, 5.6 rebounds, and a league-leading 2.1 steals per game this season.

Knicks shopping four players
The New York Knicks are expected to be sellers at the trade deadline with a 21-27 record that has them four games out of the No. 8 spot in the Eastern Conference, and as such, are openly shopping four players, according to Steve Kyler of Basketball Insiders.

The Knicks have been kicking the tires on their options at the trade deadline and one of the players more likely moved than not is big man Willy Hernangomez.

The prevailing thought around the NBA is that Hernangomez is mostly the guy moved, but that the return may not be nearly that sexy.

Hernangomez was a productive player as a rookie last year, averaging 8.2 points and 7.0 rebounds per game. However, he has largely fallen out of New York's rotation this season, averaging only 9.7 minutes in 21 appearances.

It remains to be seen what kind of market develops around these four players, though the Golden State Warriors are known to be interested in O'Quinn.

Cavs were interested in trading for Jordan Clarkson
The Cleveland Cavaliers have been looking for backcourt help to help improve their bench unit before the deadline, and they have had their sights set on Lakers guard Jordan Clarkson, according to ESPN's Brian Windhorst. However, the two sides are not currently discussing a deal.

"In recent days, the Cavs have had conversations with the Lakers." - @WindhorstESPN just now on ESPN Cleveland. mentions Jordan Clarkson as a potential target

Windhorst: Things can change but right now the #Cavs are not actively involved with the Clippers, so you can take DeAndre Jordan and Lou Williams off your list, for now.

Same with the Lakers, they aren't currently talking.

Clarkson is averaging 14.4 points and 3.3 assists per game this season.