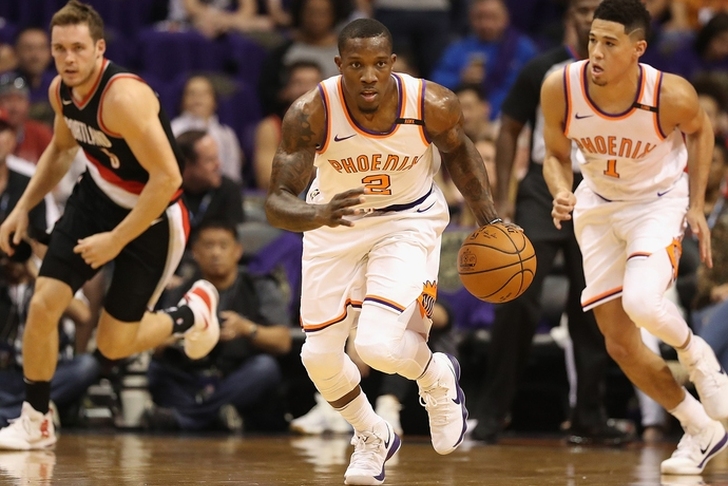 The NBA season is in full swing with the Eric Bledsoe trade saga continuing to dominate headlines. A number of teams have inquired about him, but the Suns' high asking price is driving a number of those teams away. However, Bledsoe isn't the only player looking for a trade. Here's everything you need to know in today's NBA Rumors Roundup:

Cavs, Knicks not pursuing Bledsoe trade
Both the Cleveland Cavaliers and New York Knicks are known to be interested in Bledsoe, but neither team is actively pursuing a trade at this time.

Cleveland nearly acquired Bledsoe from the Suns this offseason when Phoenix tried to acquire Kyrie Irving, but that deal fell apart because of Phoenix's unwillingness to include rookie Josh Jackson in the deal. Bledsoe and LeBron James are friends, have the same agent, worked out together this summer, and have interest in playing together. However, Joe Vardon of Cleveland.com reports the Cavs are "not in" on Bledsoe talks at this time.

As of this writing, the Cavs are not in on Bledsoe, according to sources closes to the team and to Bledsoe, and the trade you suggested doesn't make sense for the Cavs. None really do, so long as Thomas returns healthy and Rose is accountable all season.

The Suns are also known to have had talks with the Knicks about a deal for Bledsoe, but New York appears to be committed to their long-term rebuild, Sean Deveney of the Sporting News.

But here was the encouraging thing the scout said about the Knicks, the thing that Knicks fans should take to heart: "They’re bad right now. They should be bad right now. They need to be. Who knows what is going to happen, they could still do something crazy, but it seems like they’re OK with being bad for now."

New general manager Scott Perry has preached patience, as he should. Rebuilding this franchise is going to take a good while, and a trade for a 28-year-old with all the red flags attached to Bledsoe is not going to help anything.

Bledsoe had requested a trade during the offseason and expressed his displeasure with the direction of the franchise. He is hoping to be traded to a contender. The 6-foot-1, 205-pounder is averaging 15.7 points and 3.0 assists per game so far this season.

Suns may be interested in Brogdon in potential Bledsoe deal, but Bucks unwilling to include Brogdon in talks, I'm told. https://t.co/6NIvv5ElmR

NEXT READ: 4 teams that could trade for Eric Bledsoe

Mirotic prefers a trade out of Chicago—which won’t be available to the Bulls until mid-January at the earliest because he was a free agent this summer—and is willing to waive his no-trade clause to do so, sources tell NBCSportsChicago.com.

It’s been described by one source as “one of them has to go” and the Bulls are aware of the tenuous situation. Mirotic agreed to a two-year contract with the Bulls on the eve of training camp, with the second year being a team option.

Portis broke a bone in Mirotic's face during the fight, during which Mirotic also suffered a concussion. He is expected to miss another 4-6 weeks with the injuries.