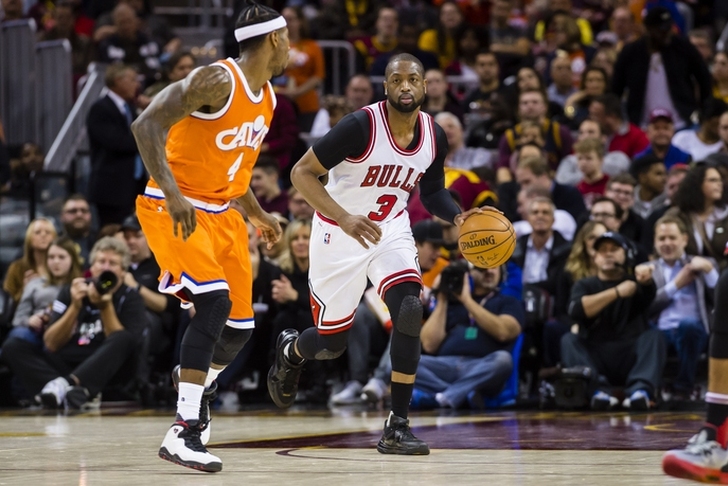 The NBA offseason is coming to a close with the start of training camps at the end of the month, and teams are making their final preparations for a new season. Still, there are a number of players who are facing uncertain futures this year, and we have updates on the situations surrounding Dwyane Wade and Iman Shumpert. Here's the latest on those players and everything else you need to know in today's NBA Rumors Roundup:

Dwyane Wade prefers to join Cavs over Heat if bought out?
The Chicago Bulls are expected to reach a buyout agreement with Dwyane Wade at this some point this season, and that seems to be coming sooner rather than later. The Bulls have publicly remained adamant about keeping Wade for the entire season, pointing to the need for veteran leadership with their young roster, but thoughts of a buyout have reportedly gained momentum.

Wade says he and the Bulls have not talked about his future with the team, but he wants to play for a contender if he does hit the open market.

“First of all, obviously, everyone wants to compete,” Wade said. “It's no secret. We would all love to compete for a championship at the end of my career. That is one thing I would love to do. I'm not in a position right now to do that so I can't talk about what that preference is. Hopefully, one day before I'm done playing this game, I can be back in position to compete for a championship.

Wade has said he would be interested in joining the Cleveland Cavaliers, Miami Heat or Los Angeles Lakers, but his desire to play for a contender indicates that the Cavs are the favorite to land him - if he gets bought out. LeBron James' people expect Wade to join Cleveland at some point this season.

Pelicans interested in Iman Shumpert
Cavs guard Iman Shumpert requested a trade from the team at the start of the offseason, but there hasn't been much interest in him on the open market. The Houston Rockets were the frontrunners for him at one point before they acquired Chris Paul, and now the New Orleans Pelicans appear to be showing the most interest, according to Cody Taylor of Basketball Insiders.

A source told Basketball Insiders last week that the Pelicans were among the teams interested in Cleveland Cavaliers forward Iman Shumpert. Since acquiring Jae Crowder from the Boston Celtics in the Kyrie Irving trade, many speculated that Shumpert could be expendable.

Shumpert is slated to make just over $10.3 million this season and has an $11 million player option for the 2018-19 season, which he is expected to decline if he is not traded. He averaged 7.5 points and 2.9 rebounds in 25.5 minutes per game last season.

NBA considering draft lottery reform
The NBA is considering making changes to the draft lottery in an effort to help discourage teams from tanking and could implement those changes by the 2019 draft, according to ESPN's Adrian Wojnarowski.

The team that finishes with the league's worst record can currently finish no lower than fourth in the draft lottery, but the new proposal would them to drop to fifth. The team with the second-worst record would be able drop from No. 2 to No. 6, and so on.

The NBA competition committee is expected to vote on this new proposal next week.