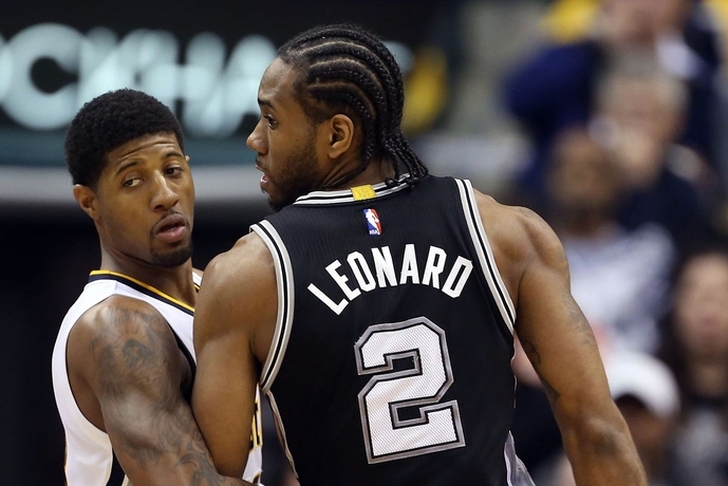 The NBA regular season will wrap up on Thursday, making each game more and more meaningful given the competitive races for seeding in both the Eastern and Western Conferences.

The Rockets and Warriors have locked up the top two spots in the West, while the Raptors and Celtics have done the same in the East - but the rest of the playoff picture is still very much murky. The Trail Blazers have locked up No. 3 seed in the West, followed by seven teams separated by four games battling for the final five spots. Meanwhile, the eight teams have already clinched their playoff spots in the East, though there are still several battles for seeding as 2.5 games separate seeds 3-5 and one game separates seeds 6-8.

Of course, teams are also looking ahead to the offseason, where some big-name players could be on the move. Here are all the latest NBA news & rumors you need to know:

According to Sam Amico of Amico Hoops, Cleveland may offer Tristian Thompson and the Brooklyn Nets' first-round pick in the 2018 draft (projected to be in the top 10) for Leonard.

...the Cavs would likely be quite open to making something like that happen. They tried desperately to move Thompson at the deadline in February.

The question is, would the Spurs?

Several things will factor into a Leonard deal. The first is how far he and the Spurs have drifted apart. If the relationship seems beyond repair, the Spurs will likely want a high pick to try to build around another potential star. The Cavs have one. So if nothing else, I believe that yes, talks are possible at the time of the draft.

Leonard, who averaged 25.5 points, 5.8 rebounds, and 3.5 assists per game last season, will be an unrestricted free agent in 2019 and may not be willing to re-sign with San Antonio. If that's the case, the Spurs will likely look to trade him this offseason.

OKC's finish won't affect Paul George's free agency decision
Paul George is another All-Star who could be on the move this offseason as he is set to hit free agency, and he's expected to either re-sign with the Oklahoma City Thunder or leave to join the Los Angeles Lakers.

The Thunder have had a disappointing season and currently hold the No. 7 seed in the West, but George said those struggles won't play a factor in his decision.

"I can see myself being here," George said of OKC. "I've been happy here, I've been happy with the organization, happy with my teammates. Our record is not what we want it to be, but I think I've enjoyed just learning and being around these guys. So my answer is still the same. I'm not going to let the playoffs or how we finish this season persuade or indicate where I'm going to this offseason. I'm going to put everything into this and again, I can definitely see myself being here.

"This is our first year together. This is year one for this group. We've got a chance to win it all, but realistically it takes time for things to build and chemistry to mesh. Just for everybody to be on the same page. So this wasn't a championship or bust coming into this for me. It was just an opportunity to see what it's like being here and just to naturally fall in love with it. And it's been that. It's been a lot of love here."

Scott Brooks rips "embarrassing" Wizards
The Washington Wizards have lost 13 of their last 19 games to drop to the No. 8 seed in the East, and following a disappointing 103-97 loss to the Atlanta Hawks on Friday, head coach Scott Brooks ripped his team's recent play.

"It's a simple game: you pass it to your teammate, you pass it because the game tells you to. If you don't pass to your teammates, you're not going to end up getting good shots. One-on-one players, there aren't many in this league, and we don't have one on our team.”

NEXT READ: NBA Power Rankings: Rockets In Tier Of Their Own As Sixers, Jazz Close Season On Hot Streaks