NBA Power Rankings: Rockets In Tier Of Their Own As Sixers, Jazz Close Season On Hot Streaks 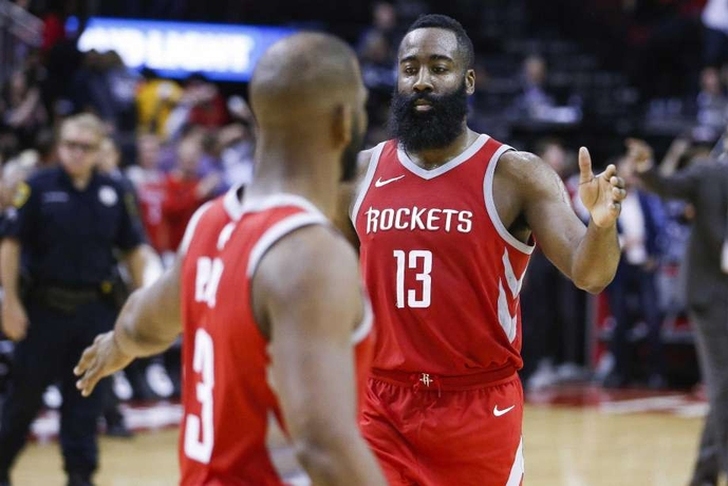 The NBA season is coming to a close on Wednesday, and while the top two seeds in each conference - Rockets and Warriors in the West, Raptors and Celtics in the East - have separated themselves from the back, the rest of the playoff picture is still very much murky.

The Trail Blazers have locked up No. 3 seed in the West, followed by seven teams separated by four games battling for the final five spots. Meanwhile, the eight teams have already clinched their playoff spots in the East, though there are still several battles for seeding as 2.5 games separate seeds 3-5 and one game separates seeds 6-8.

Here's how we rank all 30 teams in the final days in our latest NBA Power Rankings.

30) Phoenix Suns (20-60)
Phoenix is doing their best to end up with one of the top picks in the draft, winning just one game during the months of February and March. They're simply atrocious defensively, ranking last in the league in points allowed.

29) Memphis Grizzlies (21-58)
Memphis has won three games in the last three weeks, which is enough to take them out of the final spot in these rankings. Still, though, they came after a 19-game losing streak.

28) Orlando Magic (24-55)
Since winning three games in a row at the start of February, the Magic are 4-19. They'll need to win the lottery at this point to get a top pick, but they're pretty much assured of getting a top-five selection.

27) Atlanta Hawks (23-57)
Another team really at the forefront of the tank race, the Hawks have shown some surprising signs of life of late, winning 2 of their last 4 games. However, that has hurt their lottery odds.

26) Dallas Mavericks (24-56)
The Mavs are playing just well enough to keep everything from completely falling apart but they are setting themselves up for a quality draft pick, winning just two of their last 12 games.

25) Sacramento Kings (26-54)
Sacramento's team of young players - particularly De'Aaron Fox - are starting to find their stride of late, winning two of their last three games with both wins coming by a point. That's good for their future...but not good for their draft standing.

24) Brooklyn Nets (26-53)
Despite their massive mid-season struggles, Brooklyn is actually closing the season on a high note, going 5-5 over their last 10 games.

23) New York Knicks (28-51)
At one point the Knicks were 23-28. They've gone a stunning 5-23 since then and lost Kristapos Porzingis to an ACL injury, though they are 4-6 in their last 10 games and appear to have found something in Trey Burke.

22) Chicago Bulls (27-52)
Chicago is pretty much locked into getting a top-10 draft pick but a three-game win streak - one that was snapped in their last outing - likely ended any hope of them getting a top-five pick.

21) Charlotte Hornets (35-45)
Charlotte was one of the most disappointing teams of the season. They're clearly out of the playoff race but aren't in the tank race, either - they're in no man's land.

20) Los Angeles Lakers (34-45)
Los Angeles is clearly out of the playoff picture and, while their young core has shown their upside, this group has lost nine of their last 12 games.

19) Detroit Pistons (38-41)
Detroit is focusing on next season after the Blake Griffin trade didn't work out as they hoped. However, they've suddenly gotten hot despite being eliminated from playoff contention, winning eight of their last 10 games.

18) Los Angeles Clippers (42-37)
The Clippers continue to remain relevant in the post-Blake Griffin era, winning four of their last seven games as they keep their slim playoff hopes alive.

17) Washington Wizards (42-38)
For a team that talks as much as Washington does, the Wizards have been really bad, losing eight of their last 10 games - including a disappointing defeat to Atlanta on Friday.

16) Milwaukee Bucks (42-37)
Milwaukee continues to be one of the most maddening teams in the league as consistency still escapes this relatively young group. They can be dangerous in the playoffs, especially with Giannis Antetokounmpo, but have been somewhat disappointing this year.

14) Denver Nuggets (44-35)
Denver continues to play at a solid level, winning four games in a row and six of their last eight games overall, but they haven't been good enough to crack into the West's playoff picture just yet.

13) Minnesota Timberwolves (45-35)
Minnesota is barely holding onto the final playoff spot in the West but have themselves an edge with a win over the Lakers on Friday. They also hold the tiebreaker over the Nuggets.

12) New Orleans Pelicans (45-34)
Anthony Davis is putting up historic numbers seemingly every night to put himself in the MVP race and it's benefitting the Pelicans, who are currently the five-seed in the West despite only have a one-game lead on the nine-seed Nuggets.

11) San Antonio Spurs (45-34)
Is this the year the Spurs finally crack? They're still hoping to get Kawhi Leonard back next week, which would give them a needed boost, but this group is barely a playoff team without him.

NEXT READ: Here's How Much Every NBA Team Is Valued At

10) Oklahoma City Thunder (45-34)
Just when you think this talented Thunder team has figured it out, they fall back to the pack with some head-scratching losses. They certainly have the capability to make noise in the playoffs but have lost five of their last seven games.

9) Boston Celtics (53-25)
Boston is limping a bit right now and their future doesn't look any brighter after losing Kyrie Irving for the postseason due to knee surgery. This will be a season of "what could have been" for the Celtics.

8) Indiana Pacers (47-32)
Indiana continues to prove themselves as a legitimate playoff threat, winning six of their last eight games. They'll face either the 76ers or Cavs in the first round of the playoffs.

7) Portland Trail Blazers (48-31)
The Blazers have cemented themselves as the No. 3 seed in the West thanks to an 11-game win streak last month. Damian Lillard and C.J. McCollum have kept the ship steady since then in what has been a great season for Rip City.

6) Cleveland Cavaliers (49-31)
Cleveland has been playing some of their best basketball of the season, winning 10 of their last 12 games. However, a loss to the red-hot Sixers on Friday dropped them to the No. 4 seed in the East.

4) Philadelphia 76ers (49-30)
For as hot as Utah is, the Sixers have been even hotter, ripping off 13 consecutive wins despite Joel Embiid going down with a facial fracture. This young group is going to be extremely dangerous in the postseason.

3) Toronto Raptors (56-22)
The Raptors have very clearly been the class of the East during the regular season and are 25-7 over their last 32 games. Are they for real? We won't know until the postseason.

2) Golden State Warriors (57-22)
The champs are dealing with injuries that are keeping them from being the team we've known them to be, but a 6-8 stretch in their last 14 games raises questions about their effort and ability to play at an elite level without a healthy Stephen Curry.

1) Houston Rockets (64-15)
Winners of 30 of their last 33 games, the Rockets have been the best and most consistent team in the league during the regular season. There are still doubts about their ability to knock off the Warriors, but they're as big of a threat to Golden State's dynasty as there has been.