NBA Rumors: Carmelo Felt "Stabbed In The Back" By Knicks, Hayward Expected To Miss Season & More 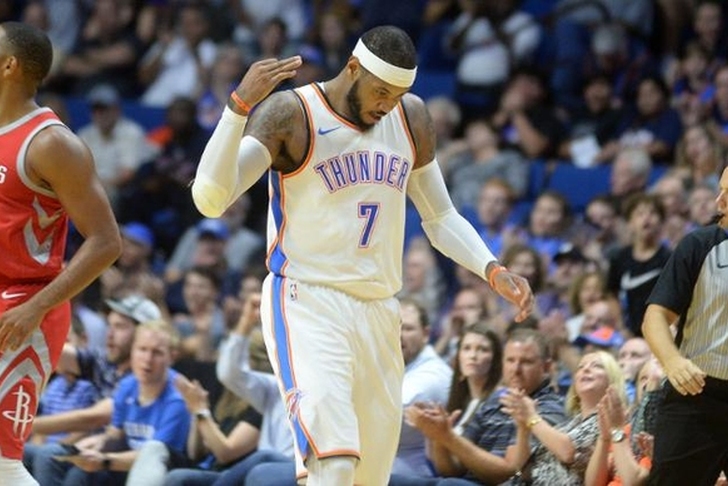 The NBA regular season is finally underway for 26 teams with the final four teams - New York Knicks, Oklahoma City Thunder, Los Angeles Lakers, and Los Angeles Clippers - starting their seasons tonight in a TNT doubleheader. While the new season is only two days old, there have already been a number of major injuries and players lost for the year. Here are all the latest news & rumors you need to know:

Carmelo Anthony felt "stabbed in the back" by Knicks
Anthony will face the Knicks for the first time tonight when Oklahoma City hosts New York, and he still holds some resentment towards his former team.

The 33-year-old had requested a trade this offseason and was trying to force his way to the Houston Rockets before accepting a deal to OKC, but he told reporters that he felt like the franchise was pushing him out, which is why he tried to leave this offseason.

“I always envisioned myself coming back, even when I was being pushed out,” Anthony told reporters at the Thunder’s practice. “I think for me, I knew what was going on behind closed doors, I knew the talk that was happening. I just wanted them to come to me direct and say, ‘Look, this is what we’re thinking,’ and not have to read it or hear about it and then go to them and say, ‘What is this?’ If they felt that I just wanted them to be honest and direct.

NEXT READ: Here's why Chris Paul wanted to leave the Clippers - and ultimately picked the Rockets

Gordon Hayward expected to miss the entire season
Boston Celtics forward Gordon Hayward suffered a gruesome leg injury on Tuesday (fractured tibia, dislocated ankle) and after having surgery on Wednesday, it was confirmed that he is not expected to return this season.

Bartelstein tells ESPN on Hayward: "We expect him to make a full recovery and return to his All-Star form."

The injury is similar to the injury suffered by Oklahoma City Thunder forward Paul George during a Team USA scrimmage in 2014. He returned to play in the final six games of that season for the Indiana Pacers.

Hayward was one of Boston's major offseason acquisitions this offseason, signing a four-year, $128 million deal. He averaged a career-high 21.9 points per game last season for the Utah Jazz.

Jeremy Lin out for the year
Brooklyn Nets guard Jeremy Lin is also out for the remainder of the season after rupturing his patella tendon in their opener on Wednesday, the team announced.

Jeremy Lin is out for the season. pic.twitter.com/5PmXceaPn6

Lin had scored 18 points and dished out four assists in the game before suffering the injury in the fourth quarter. He averaged 14.5 points and 5.1 assists per game last season.