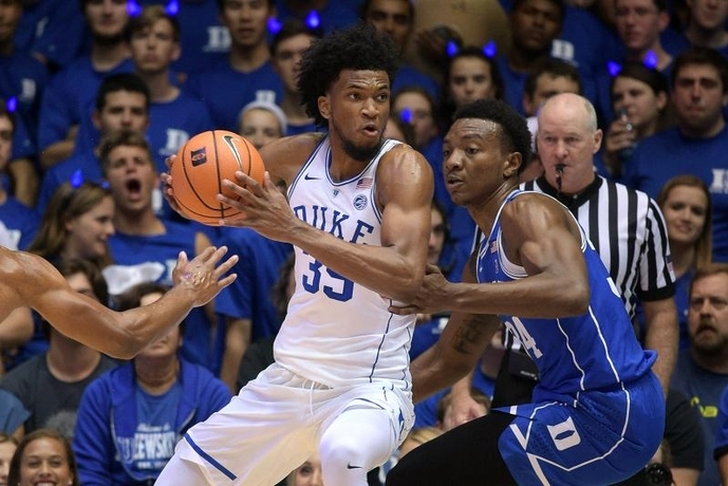 The new NBA season is only a few weeks old, yet some teams who have no chance of making the playoffs are already focused on who they could get at the top of the 2018 NBA Draft. This year, one of the top prospects is 18-year-old Real Madrid star Luka Doncic, but many casual basketball fans won't get the chance to see him play this season since he plays overseas. However, virtually every other top prospect will be playing college basketball this year. So, who should you pay attention to? Here are the top nine 2018 draft prospects in college basketball:

If Sexton was a couple of inches taller, he'd be a lock to be a top-five pick in the draft. He's a dynamic athlete who is exciting to watch because of his quickness, vision, finishing ability, and defensive quality. Perhaps the most competitive player in this class, Sexton is expected to make Alabama one of the best teams in the SEC this season.

Williams is a super athlete who may have been a first-round pick if he stayed in the 2017 draft but opted to return to school to work on his consistency. That athleticism and his shot-blocking ability make him an intriguing prospect. He needs to show growth offensively if he wants to ensure his lottery-pick status.

Every major player from last year's team returns for the Spartans, but Jackson is a big reason why Michigan State is ranked No. 2 in the preseason. Jackson has a 7-foot-4 wingspan and is a great athlete, giving him a ton of defensive upside as a shot blocker. He's competitive on the glass, runs the floor well and is a good finisher, yet needs to play stronger and improve his shooting. Jackson looks to be the perfect complement to star Miles Bridges.

Duke brought in another top recruiting class this year and Duval is as important as any for them. He is another elite athlete with outstanding quickness, vision, and a high basketball IQ, but his skill set is still developing. Duval has gotten by in his career due to his superior athleticism and needs to improve his shooting and finishing ability to make the real impact Duke and scouts are expecting him to have, but it's easy to see why people are excited about his potential.

Bamba is the defensive standout of this class. He will really benefit from Texas' weight program as he really needs to get stronger, but is a game-changing shot-blocker that will hold down the middle in the way Jarrett Allen was supposed to for Texas last season. His athleticism will also allow him to play at the faster pace demanded in the NBA.

The preseason favorite to win National Player of the Year, Bridges was going to be a lottery pick in the 2017 draft before opting to return to school. Bridges is hoping to work on his all-around game this season, but is a freak athlete who is excellent finishing around the rim. And it's not like he was bad as a freshman - he averaged nearly 17 points while grabbing over eight rebounds per game. Consistency will be key for him.

Can I interest you in a 7-foot center with a 43.5-inch vertical leap? In normal classes, Ayton would be a lock No. 1 pick, but he's just behind the top three of Doncic, Porter, and Bagley - for now.

The best true center prospect we've seen in some time, Ayton is a highly skilled big man who still has plenty of upside. Though he's not a super athlete (despite the vertical), he's a good athlete with reliable post moves - and someone Sean Miller will utilize on every single possession. He's smart, a good passer, and a quality defensive presence.

Porter is a dream prospect for whoever gets a top three pick in the draft. He's a good, fluid athlete who excels on the perimeter and around the basket with his smooth skill set. Unfortunately, he may turn into this year's Ben Simmons or Markelle Fultz because of the team he plays on (the Tigers largely lack talent outside of him and his brother, fellow freshman Jontay), but if you get the chance to watch him, do it. He can do it all.

Speaking of guys who can do it all, no one personifies that more than Bagley.

The conversation all season will be about whether Bagley or Porter will be the top pick in the 2018 NBA Draft, but there really shouldn't be much of a debate - Bagley is the better player and many scouts say he would've been the top pick had he been eligible for the 2017 draft. In fact, he shouldn't even be eligible for the 2018 draft. He reclassified and skipped his senior year in high school in order to play for Duke this year. NBA teams love the fact that they'd have that extra year with him.

Bagley is an extremely versatile forward and a gamechanger in every sense of the word. He can handle the ball and attack the rim like a guard while having the rebounding and shot-blocking abilities of a true big man. Those skills, coupled with his fluid athleticism, make him a matchup nightmare. Don't be shocked if he becomes the third freshman to win National Player of the Year.

Check out our NBA page for all the latest NBA Draft news & rumors!