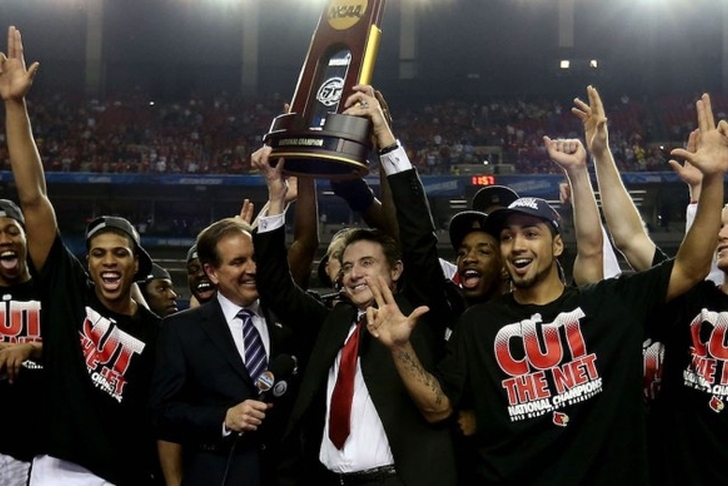 The NCAA announced that they have denied Louisville's appeal of the penalties they received as a result of the recruiting scandal under former head coach Rick Pitino involving sex parties, meaning the program will have to vacate all wins from the 2011-15 period in which ineligible players competed - including the 2013 national championship.

Louisville must vacate men’s basketball records in which student-athletes competed while ineligible during the 2011-12 through 2014-15 academic years according to a decision issued by the NCAA Division I Infractions Appeals Committee. The appeals committee also upheld the NCAA Division I Committee on Infractions penalty that requires the university to return to the NCAA money received through conference revenue sharing for its appearances in the 2012, 2013, 2014 and 2015 NCAA Division I Men’s Basketball Championships.

In the Committee on Infractions’ decision, the panel found that a former Louisville director of basketball operations acted unethically when he committed serious violations by arranging striptease dances and sex acts for prospects, student-athletes and others, and did not cooperate with the investigation. The violations in the case resulted in some men’s basketball student-athletes competing while ineligible.

The penalties stemmed from allegations that former assistant coach Andre McGee paid someone to bring women and prostitutes to entertain players and recruits from during the four-year period mentioned above. Louisville self-imposed a postseason ban for the 2016 NCAA Tournament after these allegations came to light, which the NCAA accepted.

This punishment is unrelated the FBI investigation into corruption and bribery in college basketball that cited other major recruiting violations by a number of schools, including Louisville and Pitino.

Louisville had argued that the penalties were excessive and "based on participation of student-athletes who were not culpable in the violations," but the NCAA decided that the punishment was appropriate because of the "serious and intentional" nature of the violations.

"I can not say this strongly enough," interim Louisville president Greg Postel said. "We believe the NCAA is simply wrong to have made this decision.”

McGee resigned as an assistant coach at UMKC in November 2015 after news of the investigation broke, and he has been out of coaching since. His 10-year show-cause penalty means that he will not be able to resume his coaching career until June 2027.

The school is also on probation until June 14, 2021, and will vacate their 2012 Final Four appearance as well.

Louisville defeated Michigan, 82-76, in the 2013 National Championship Game, capturing the program's third national title and Pitino's first at the school. Now, according to the NCAA, they have only two championships (1980, 1986).