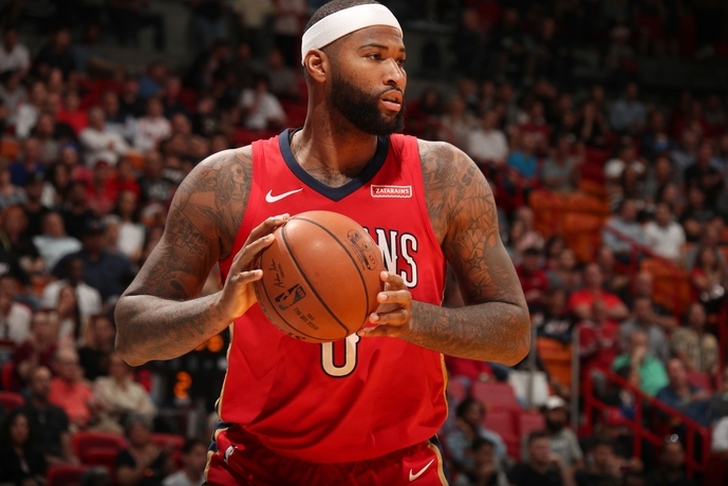 The Los Angeles Lakers have been trying to maximize their cap space to make a run at two superstars in the coming offseason, and New Orleans Pelicans center DeMarcus Cousins is one of the players they plan to pursue, according to Marc Stein of the New York Times.

"I think most teams around the league believe that the Pelicans will re-sign Cousins unless he doesn't want to stay there," Stein said on the Dunc'd On Podcast. "I think the Pelicans are the clear favorites. Now, I would say there's an expectation and maybe even speculation on the part of rival teams, but I've heard Dallas and the Lakers mentioned most frequently that those are teams that expected, whatever expected means, to make a run at him.

"Now for the Lakers, they have other targets. I would think Cousins is lower on their list than certainly LeBron or Paul George, but Dallas going after Cousins would be a very Mark Cuban move. I obviously live in Dallas. There's been talk about Cousins here for awhile, certainly around town people expect the Mavs to go after him. Can they convince him to leave New Orleans if the Pels put that max deal on the table?"

Cousins would figure to take over the starting center spot from Brook Lopez, who is in the final year of his contract. The Lakers acquired him from the Brooklyn Nets in the D'Angelo Russell trade and do not plan to re-sign him.

The Pelicans traded for DeMarcus Cousins prior to the trade deadline last season and are hoping to pair him long-term with Anthony Davis. As such, they plan to offer him a max deal as well.

Since taking over LA's front office, general manager Rob Pelinka and team president Magic Johnson have been planning for Paul George and LeBron James to be the two players they sign to max deals in 2018. However, murky futures around both with their current teams are causing the Lakers to look at other options.

In order to create as much cap space as possible, the Lakers are willing to trade both Julius Randle and Jordan Clarkson.