From Role Player To Star: Why Devonte' Graham Will Win National Player Of The Year 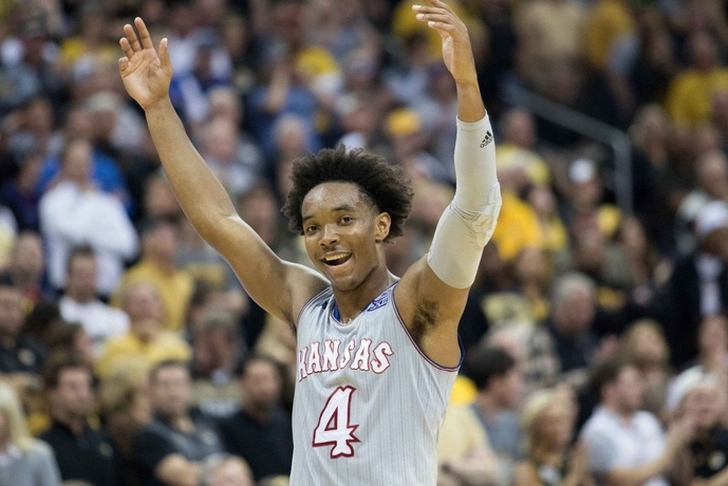 No college basketball program has ever had two different players win National Player of the Year in consecutive seasons - but Devonte' Graham and the Kansas Jayhawks are ready to change that.

Michigan State's Miles Bridges and Duke's Grayson Allen have reeled in many of the preseason accolades, but at the end of the year, it will be Graham holding the distinction as the best player in the country.

Former KU point guard Frank Mason III won every major player of the year award last season, becoming the first player in team history to win the award since Danny Manning in 1987-88. Graham has played alongside Mason for the last three seasons, and as you would expect when playing next to someone of Mason's magnitude, he took a backseat.

Now, this is his team.

“Devonte’ is the face of our program, there’s no question about it, probably as much right now as anybody we’ve had,” head coach Bill Self said at Big 12 media day.

That's not to say that Graham has simply been riding Mason's coattails throughout his career. Despite playing out of position, he drew major NBA interest following a junior season in which he averaged 13.4 points, 4.1 assists, and 3.1 rebounds per game.

He would've been a second-round pick and would be on an NBA roster right now if he had decided to go that route. Instead, he chose to come back to boost his draft stock - the same thing Mason did a season ago.

“It wasn’t anything (about) convincing him to come back,” Self said. “That was a situation where he came to me and said, ‘I’m a little confused. I need to think about it.’ He talked to his mom. We talked about it a little bit, and then he came back and said I think it’s in my best interest to stay.

“I think Devonte’ in large part came back because, if I’m not sure that I’m ready, why wouldn’t I roll the dice and see if I can do what Frank did? I think Devonte’ thought like that.”

Graham is now at the reins of a Kansas team that is expected to win their 14th consecutive Big 12 title - which would set an NCAA record - despite the losses of Mason and No. 4 overall pick Josh Jackson. Graham is one of four full-time or part-time starters that return and have been joined by five-star forward Billy Preston and former five-star recruit and Mississippi State transfer Malik Newman.

“Every year, new faces come in, expectations remain the same, so we’ve just got ‘next man up,’” Graham said, via the Kansas City Star. “I feel we have a nice little mix of new and old, guys who have been here and played in big games and guys who haven’t for the most part.”

Being the star player on a championship-caliber team (Kansas is ranked #4 in the Chat Sports Preseason Top 25) has almost become a prerequisite for someone's Player of the Year campaign, and Self says the Jayhawks aren't going anywhere Graham doesn't lead them to.

Graham is going to have the ball in his hands a lot, and as the point guard in Self's offense, he'll be involved in a ball screen or two every possession. He'll determine where the ball goes, whether that's dishing it to a teammate for a shot or keeping it for himself.

“In order for us to be real, really good he has to play at an All-American-type level for us, and we think he’s very capable of doing that," Self said. "Certainly he’s got the personality that will draw people to him by watching him play.”

There is plenty of reason to believe that Graham is due for a big leap in production. He was classified as a role player last year by KenPom.com with usage rate between 16-20 percent. Meanwhile, Mason - whose role Graham will be overtaking - was classified as a major contributor as he was used on 24-28 percent of KU's possessions.

The increased role will mean that Graham will have the ball in his hands more, which means his production will increase. It's certainly not out of the realm of possibility for him to duplicate Mason's numbers of 20.9 points, 5.2 assists, and 4.2 rebounds per game. After all, Mason's stats mirrored Graham's before he made that POY jump last season due to increased usage. Why won't Graham do the same?

We got our first glimpse of him in that role in Kansas' preseason exhibition against Missouri. In a competitive atmosphere (a rivalry game which drew 18,951 fans to the Sprint Center in Kansas City) against a team ranked in many preseason polls, Graham scored 25 points (a game-high) to go along with 10 rebounds (a team-high) and five assists in a 93-87 win. He was clearly the best player on the court, outclassing a projected top-three pick in Mizzou's Michael Porter Jr.

Of course, the bright lights aren't on yet. Those will come Friday night when Kansas hosts Tennessee State in their regular season opener (9:00 pm ET, ESPNU).

"It’s finally here," Graham told his teammates after Tuesday's exhibition win over Fort Hays State, speaking about the regular season. It is - and it's going to be a historical one for him.

Follow our Kansas Jayhawks team page for all the latest Kansas basketball news!