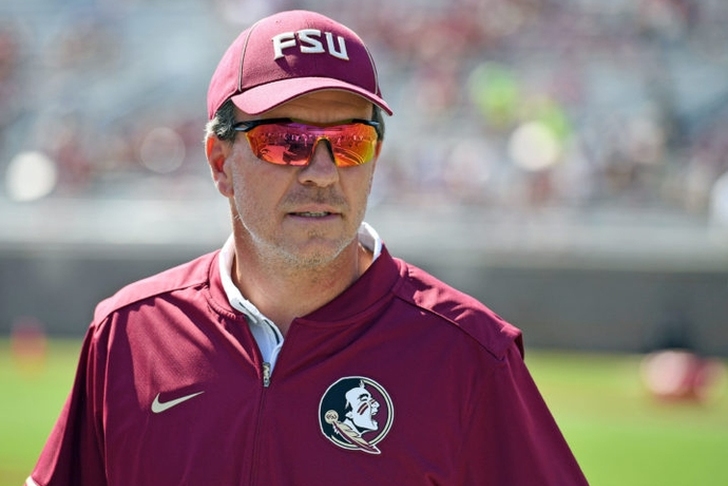 Fisher held a team meeting to tell the team he was leaving for A&M, and a current FSU football player told Chat Sports about what occurred in that meeting, which was "short and to the point."

The team was "shocked and pissed" when Fisher told them the news, who explained his reasoning for leaving this way:

"It's not personal. When you get older, you'll understand."

The move had been rumored for several weeks, but Fisher refused to address those rumors both publicly and with his team. The player told Chat Sports that Fisher would simply say "we will figure it out later," which had started to frustrate many players.

That frustration had led to rumors that players had threated to boycott the team's regular-season finale against UL-Monroe if Fisher was still the coach and that a number of players planned to transfer if Fisher returned next season. The player said the team never talked about boycotting the game and were "joking" when discussing transferring, but the team did express concerns that some of the recruiting class would decommit.

The player also said the team has not discussed who they want to be FSU's next head coach but want to see how interim coach Odell Haggins does this weekend. With a win over the Warhawks, Florida State would become bowl eligible. Haggins would coach the bowl game as well.

Many school officials were also growing tired with Fisher.

He had also been trying to strong arm the school to building a standalone football facility and had flirted with taking the LSU head coaching job each of the last two years, and the constant extra monetary demands - plus looking at other jobs - ultimately caused the Seminoles to let him walk.

Fisher experienced plenty of on-field success in Tallahassee, going 83–23 in eight seasons as FSU's head coach, winning at least 10 games for five consecutive years before this season. He also led the Seminoles to three straight ACC titles (2012-14) and the 2013 national championship.