Ezekiel Elliott Appeal: Here's Everything We Know With The Hearing Completed 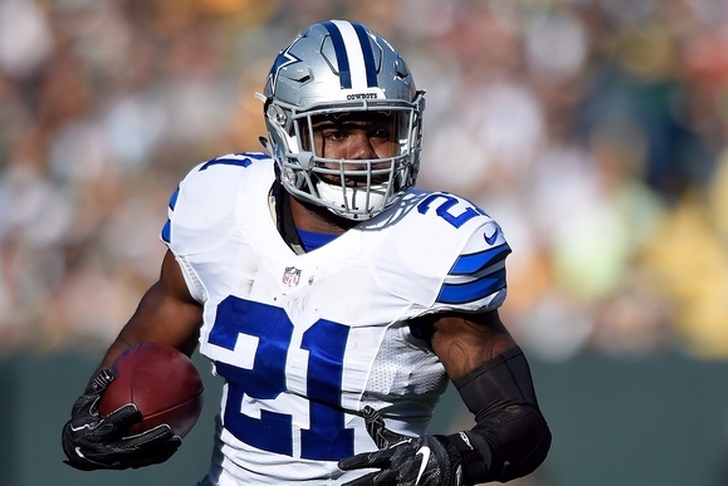 The Ezekiel Elliott appeal of the NFL's six-game suspension for domestic violence is in its second day, as Elliott, his representatives and the NFLPA attempt to convince independent arbitrator Harold Henderson that the suspension should be reduced or eliminated. The hearing won't wrap up today and below is everything we know about the case of the Dallas Cowboys running back.

Update 1:
We thought it would make more sense to have all the new information at the top. The original post is still below and contains plenty of information.

Hearing Complete
It was a long hearing, but the Elliott appeal has wrapped up.

The appeals hearing for #Cowboys RB Ezekiel Elliott has wrapped up after 3 days & more than 25 hours. Harold Henderson is on the clock.

Henderson, as mentioned above and below, was the arbitrator for the hearing. The NFLPA doesn't believe he's truly independent, but the ball is now in his court to make a decision.

When Will Know The Ruling?
Per Adam Schefter, we might not have to wait long to hear from Henderson.

Harold Henderson, the appeals officer in the Ezekiel Elliott hearing, is under pressure to have a decision by Monday, per source.

That's a timeframe Henderson has matched before, but this is a case that could go to court (more on that in the original post), so Henderson will need to get make sure he's covered all his bases. Elliott's suspension starts on September 2nd.

Will Elliott's Suspension Be Reduced Or Eliminated?
We're still not sure. The buzz leading up to the hearing was not favorable for Elliott, but the recent reports have looked much better for him (again, more on that below). The latest is that Schefter thinks the suspension will be reduced.

"The more that I have heard, the more I think he has a real chance to have some games knocked off the suspension," Schefter said on ESPN Radio's "Mike and Mike."

Even if that happens, Elliott's camp might elect to still appeal to a federal court and do another Tom Brady / Deflategate-type deal.

How Long Will This Last?
The hearing itself will last until at least Thursday.

Ezekiel Elliott's appeal of his six-game suspension with the NFL is scheduled to last through Thursday, per a source.

I'm told, this is because one witness can't be available until Thurs morning, as of now. So appeal is slated to last through then right now. https://t.co/RyUqTGOcjI

The first day of the hearing lasted for hours, but Elliott's team fears it's not really a true appeal hearing.

What Are Elliott's Chances Of Winning?
There are some new promising developments for Elliott, which we'll get to below, but entering the hearing, it wasn't looking great. Yesterday, there was a report from Charles Robinson of Yahoo Sports that said Elliott's camp did not think they would win. There were two major events that Elliott's camp thinks ensured he won't win: the appointment of former NFL executive Harold Henderson as the "independent arbiter" for the appeal and the decision by Henderson to bar the cross-examination of the accuser, Tiffany Thompson, and any notes from her interviews.

"But there is a twist: The NFLPA and Elliott’s defense team have been looking for a potential procedural violation to mount a challenge in federal court," Robinson writes. "Sources have told Yahoo Sports that they believe they have it, via some of the same procedural collective bargaining arguments that opened the door for the union and quarterback Tom Brady to sue the NFL in deflate-gate. The sources declined to make the exact violations clear, but told Yahoo Sports that it involves all three of the aforementioned developments: naming Henderson as a partial arbitrator; failing to require Thompson to appear for cross-examination; and refusing to produce investigative material gathered when the NFL interviewed Thompson on multiple occasions."

The NFLPA does not think Henderson is actually a neutral party, since he used to work for the NFL. Much of Elliott's case is built around the credibility, or lack thereof, of Thompson. But while Elliott wasn't confident entering the hearing, the reports of late have suggested that's changed.

What's This "New Evidence"
Perhaps you've heard there's new evidence that's been submitted by Elliott's camp. ESPN's Josina Anderson has been covering the appeal and she has several tweets with information about how the Elliott camp feels.

Re. Ezekiel Elliott appeal proceeding Tues, I was told there were "enormous showings on inconsistencies" w/ the #NFL's investigative report. https://t.co/WYSfEOqpEa

Also could there be photos presented that would go against injuries depicted within the case timeline? #EzekielElliott

As far as Tues. appeal proceedings I was also told, there were "things that happened that were amazingly good for our side." We'll see... https://t.co/QRkD8h94Hn

Check out this affidavit from the PD report. I can't find the referenced photo anywhere. This would prove he's innocent if verified. pic.twitter.com/33DnQ1qcVH

Just verified this as an affidavit. We'll see how it goes... https://t.co/QdjEDc3lbG

That affidavit provides more evidence that the accusations of domestic abuse that night are not accurate. If there is a photo with that affidavit, it could help prove Elliott's case. If there are no bruises on the victim before that photo was taken, it casts serious doubt on the NFL's basis for disciplining Elliott. The NFL (and police) have already determined that the accuser lied about the July 22nd incident of domestic violence, but the NFL believes Elliott had abused her in the days leading up to that.

What Is Jerry Jones Doing?
Jones was adamant Elliott is innocent and he was very vocal about that leading up to the NFL's decision. He was reportedly furious after the NFL suspended Elliott for six games and was quiet in the immediate aftermath. He's not present at the hearing, although the Cowboys did send a lawyer. Jones chimed in on 105.3 The Fan in Dallas on Tuesday.

"Unfortunately you get confused in this conversation,” Jones said. "Every person that has any sense at all understands domestic violence and abhors it. On the other hand, I’ve had a lot of experience in this area. For 10 years before I bought the Cowboys, I was the head of battered women of Arkansas. I raised more money and been in more safe houses than a lot of people that talk about it and so it’s a terrible problem.

"On the other hand with what we are today and what we’re trying to be relative to addressing it in the league, [it] has all kinds of issues and it should. It’s a very complicated issue because you have no evidence here. That’s all I want to say about it. But it creates quite a convoluted approach by Zeke’s representatives and by the league that I really hate is a focus of all of our attention. I do. Even though others would say that the issue needs this kind of focus and you’re using the NFL for visibility."

Jones remains one of the most powerful owners in the NFL. If Elliott's suspension isn't overturned, he'll continue to support his player.

When Will The Appeal Result Be Known?
Well, frankly, we don't really know. The CBA doesn't provide a definite timeline for an appeal ruling. But CBS Sports provides some good information. Assuming the hearing wraps up on Thursday, Henderson likely won't rule before Elliott's suspension starts on Sept. 2nd. That's just four days later and this will be a case that likely goes to court (more on that later). While the appeal is pending, Elliott won't be allowed to practice with the team, per CBS. There are 10 days (starting Thursday) before the season opener against the Giants and that fits Henderson's previous ruling time frames. So expect the ruling in that time frame, although it won't end the case.
Re-Stocked: Nike's new Dallas Cowboys SHOES! Check 'em out.

What Happens If Elliott's Suspension Is Upheld (Or Not Shortened Enough)
Remember the Tom Brady-Deflategate mess? Yeah, expect that again. If Elliott doesn't get his suspension reduced we know one thing for sure: this is going to court. The NFLPA has already hired go-to lawyer Jeffrey Kessler to help with the case. Kessler led the way for the NFL in the Tom Brady case and the last antitrust case against the NFL, among others. Once the NFL renders the verdict on the appeal, the NFLPA will move quickly to file a lawsuit against the NFL in a jurisdiction it believes to be favorable. And it will likely be ugly. And if the NFLPA can get an injunction (just like Brady), there's a very good chance Elliott will play Week 1. But winning the case, especially with the precedent of Brady losing, won't be easy. But that's an article or update for if and when we reach that point.

Check out our Dallas Cowboys page for all the latest Cowboys Rumors or download the Chat Sports App!