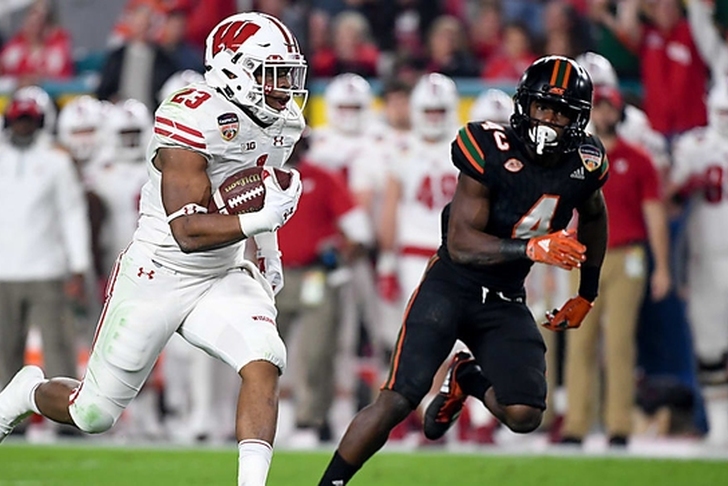 The Wisconsin Badgers used an offensive explosion in the second quarter to overcome an early double-digit deficit in a 34-24 win over the Miami Hurricanes in the Orange Bowl.

Quarterback Alex Hornibrook led the Badgers with his best game of the season with 258 yards and four touchdowns, three of which went to Danny Davis III.

Running back Jonathan Taylor also finished with 130 rushing yards in this game, giving him 1,977 yards on the season - which sets the NCAA record for most rushing yards by a freshman.

However, early on, it looked like Miami was going to run away with the game. The Canes started red-hot after forcing a turnover on the opening drive and built a double-digit lead in the first quarter.

After that, their offense stalled right as Wisconsin's found their rhythm. The Badgers scored three unanswered touchdowns in the second quarter to take a 24-14 lead into halftime.

The Hurricanes finally answered with a long touchdown pass early in the third quarter, but after the two sides traded field goals, Hornibrook found Davis for the third time to put the game away.

Quarterback Malik Rosier really struggled for Miami, completing just 11/26 passes for 203 yards and a touchdown with three interceptions, and the rest of the offense didn't perform much better. Running back DeeJay Davis was a bright spot for the Canes with 69 yards and a touchdown on eight carries while catching one pass for 22 yards.

The win pushes Wisconsin's record to 13-1 on the season, marking the first time in school history the school has won 13 games. It makes the Big Ten 7-0 this bowl season.

Miami drops to 10-3 with the loss, but it's still the first time since 2003 that they finish the season with double-digit wins.

Follow our Wisconsin Badgers team page for all the latest Wisconsin football news!