The Noon Number: Gone in 78 Seconds 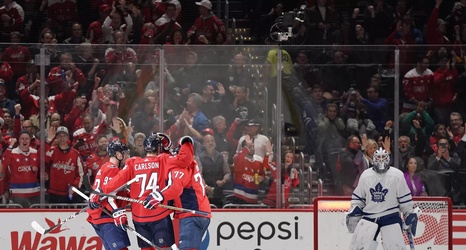 78 - Number of seconds in which the Caps turned a 2-1 deficit into a 4-2 lead during the second period of last night’s win over the Leafs. Per @StatsBySTATS, that’s the fastest trio of tallies for Washington since November 12, 2003, when Dainius Zubrus, Alexander Semin and Robert Lang put up three in the span of 1:16 (which also, incredibly, included a Ryan Bayda goal-against) versus the ‘Canes.

And while those are both pretty quick times for three goals, they’re nowhere near the team record, set back on November 23, 1990, when Michal Pivonka and Stephen Leach (twice) torched the Penguins (without the benefit of an empty netter) for three goals in.