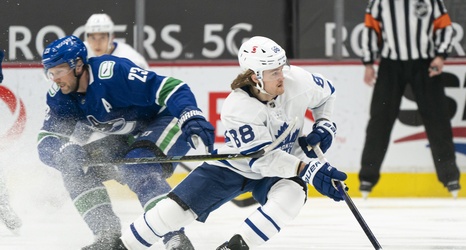 VANCOUVER, BC - APRIL 18: William Nylander #88 of the Toronto Maple Leafs turns aways from the pressure of Alex Edler #23 of the Vancouver Canucks during NHL hockey action at Rogers Arena on April 17, 2021 in Vancouver, Canada. (Photo by Rich Lam/Getty Images)

It has not been a good road trip for the Vancouver Canucks so far.

The team is currently riding a three-game losing streak, which includes their most recent 4-1 thumping from the Toronto Maple Leafs on Thursday night. They’ve been severely outscored, outplayed and out-chanced during that span, and have fallen to the last spot in the Scotia North Division as a result.