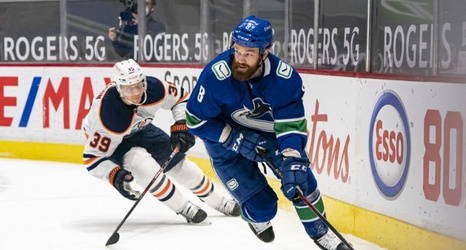 VANCOUVER, BC - MARCH 13: Jordie Benn #8 of the Vancouver Canucks tries to break free from Alex Chiasson #39 of the Edmonton Oilers during NHL action at Rogers Arena on March 13, 2021 in Vancouver, Canada. (Photo by Rich Lam/Getty Images)

The Toronto Maple Leafs should have no problem moving back into the Atlantic Division.

The Toronto Maple Leafs won the Canadian Division last season despite not even having a power-play for half a season, and giving half their games to a starter who couldn’t keep his save percentage over .900.

Basically, the Leafs made a mockery of their fellow Canadian teams by coming in first with one hand tied behind their back.