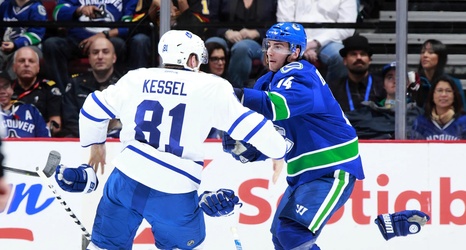 Good morning to all of you wonderful Toronto Maple Leafs fans and especially our team grandma:

People were very upset that Wayne Simmonds made Alex Edler eat his actions for taking out Zach Hyman at the knees. I’m not a guy who loves to see people smack each other around but I am someone who loves vengeance for those I love and I love all of my Maple Leafs so Alex Edler should get punched in the head again tonight because that makes me feel good.

“But Edler just came off weeks away from the game and was smaller than Simmonds, bloo bloo bloo”

To that, I say this (through Kevin Bieksa)

Despite no one on the Canucks complaining, an entire day as spent online and over the air with Canucks and Leafs fans/media sniping at each other.