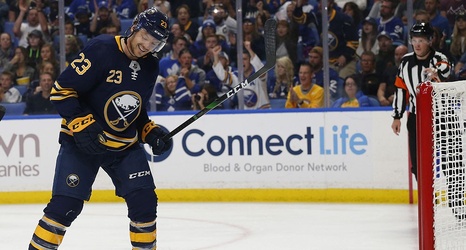 Michal Neuvirth – He couldn’t do anything about the first goal; he had a fighting chance on the Buffalo power-play goal, but it wasn’t exactly one you’d hang on the goaltender. It’s pretty obvious why he’s started over 250 games in the league while winning more than he’s lost and posting multiple 20-plus start, .915+ seasons — he’s positionally sound, calm, and efficient in the net, with the reflexes/speed/agility to call on when he needs it, and he absorbs pucks well.

Neuvirth appears to have the mental makeup to back up in the league, as he showed by posting decent numbers when he was surpassed by and played sparingly behind Braden Holtby in Washington, and it’s really all a matter of whether he can emerge from the rest of camp healthy and with some more good performances under his belt.