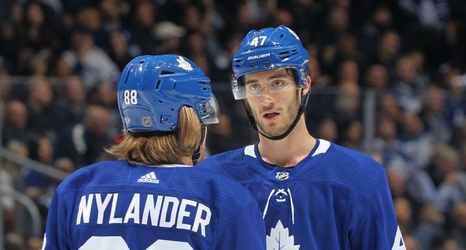 TORONTO, ON - JANUARY 16: Pierre Engvall #47 and William Nylander #88 of the Toronto Maple Leafs chat during a timeout against the Calgary Flames in an NHL game at Scotiabank Arena on January 16, 2020 in Toronto, Ontario, Canada. The Flames defeated the Maple Leafs 2-1 in a shoot-out. (Photo by Claus Andersen/Getty Images)

The Toronto Maple Leafs have lost three in a row, but have done so without their third best player (not to mention various back-up goalies and no power-play).

After last night’s game was rescheduled following the Vancouver Canucks horrible Covid situation, the Leafs and Canucks will play what has to be one of the most unfair games in NHL history.