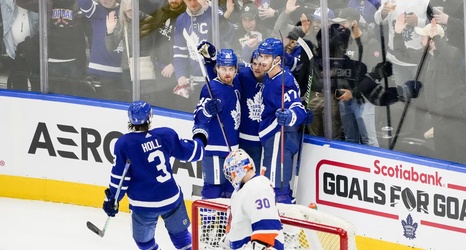 Do you ever think about the Long Island Islanders? I don't, not really. The little brothers of the New York Rangers exist, we know that for sure. They played the Toronto Maple Leafs tonight and a hockey game happened.

This is that hockey game.

It began with a fight, oddly enough. Ross Johnston took on Wayne Simmonds, Simmonds didn't win but there was also some punches thrown once Wayne went down.

The Leafs have the offensive advantage to start, getting all of the shots on net for the first five minutes. Former Leaf Matt Martin blocked a Mark Giordano shot and lost the blade of his skate.