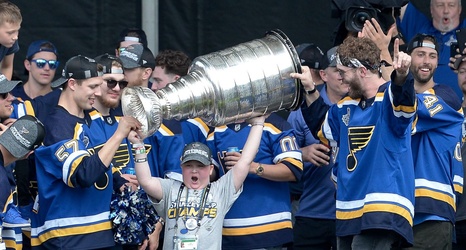 Blues superfan Laila Anderson attended St. Louis's game against against the Maple Leafs on Saturday night, but what made it most special was who she spent it with.

In her fight with a life-threatening immune disease disorder called HLH, Anderson received a life-saving bone marrow transplant from a man named Kenton Felmlee. On Thursday night, she met him for the first time in an event held by the donation program that matched them, called Be The Match.

After their emotional meeting, Felmlee accompanied Anderson to a Blues game. Anderson brought with her a "Thank You, Kenton" sign that she held in the crowd for her bone marrow donor.