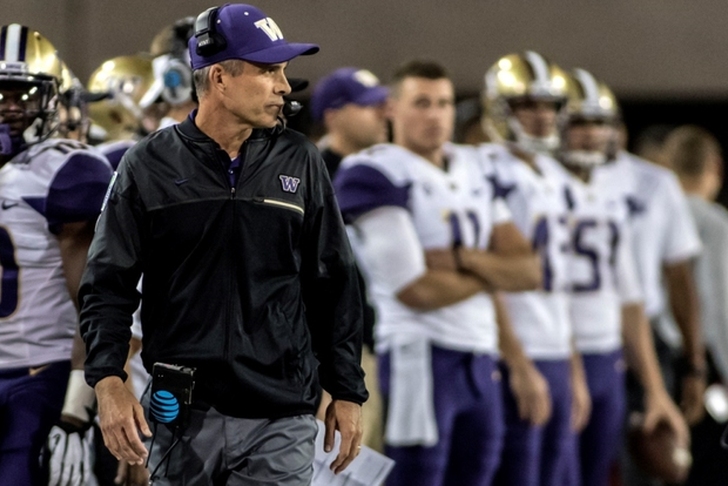 The Tennessee Volunteers officially fired Butch Jones earlier this year. The move came after perhaps the most embarrassing loss of the season, a 50-17 drubbing at the hands of Missouri, dropping them to 0-6 in the SEC this season. With Jones now out, the Volunteers are searching for a new head coach and they have the advantage of an early start. Here are the all the latest Tennessee Football coaching rumors you need to know. And yes, they latest Grumors are included.

Vols Want Chris Petersen?
The Vols have serious interest in Washington Huskies head coach Chris Petersen, reports 247Sports. It's easy to see why Tennessee wants Petersen: he's a great head coach and would be an instant upgrade for the Vols. However, Petersen has a good job with the Huskies and given that he's spent most of his life and coaching career on the West Coast, he might not want to head to Knoxville.

Latest Grumors
Jon Gruden has been connected to the Tennessee coaching search since before Jones was even fired, but it's looking increasingly unlikely that the Vols will land Gruden. 247Sports reports there's nothing going on with the Gruden front, a bad sign for the Vols chances of landing him. Football Scoop reports that Gruden doesn't consider himself a candidate for the gig. And then finally, Gruden's broadcast partner at ESPN doesn't think he'll leave.

"I think he’s very happy doing what he’s doing," Sean McDonough said. "He hasn’t said this to me, but just being around him, I would think if he’s going to go back to coaching, it would be in the NFL … He loves Tennessee. He started his coaching career there. His wife is from there, and he has a son who is there now.

"I know he feels very passionately about the place, but I would be very, very surprised if he were to be the next coach of the Tennessee Vols … Doesn’t mean he can’t have some fun with it."

All that means one thing: don't expect Gruden to coach Tennessee.

Greg Schiano The Backup Option?
The Vols are chasing several more notable coaches, but they might have a backup coach in mind: Ohio State DC Greg Schiano.

"Some in the profession reached out to us today to say don’t discount Schiano’s chances," Football Scoop reports. "Some we’ve spoken with today said [AD John] Currie believes if some other things don’t fall into place that Schiano could be the guy."

Schiano failed with the Tampa Bay Buccaneers, but did wonders for a Rutgers program that fell apart without him. If the Vols miss out on their top targets, Schiano wouldn't be a bad fall-back option.

Follow our Tennessee Volunteers team page for all the latest Tennessee football rumors or download the Chat Sports App!