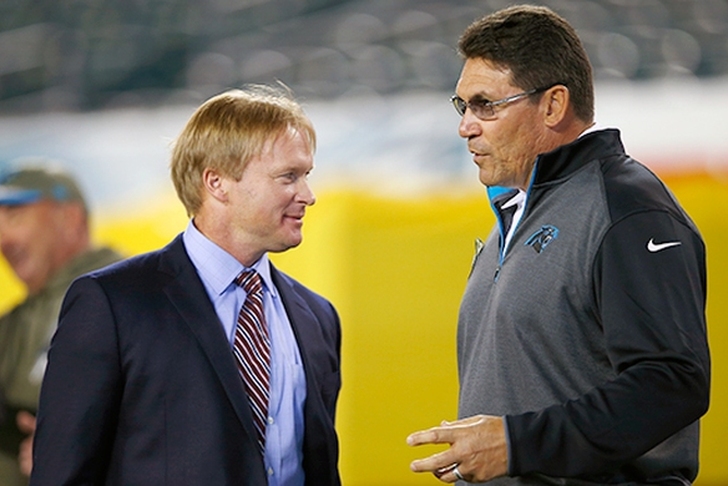 The Tennessee Volunteers officially fired Butch Jones on Sunday following perhaps the most embarrassing loss of the season, a 50-17 drubbing at the hands of Missouri, dropping them to 0-6 in the SEC this season. Tennessee was hoping to wait until the end of the year to fire Jones, but they simply decided they wouldn't wait any longer.

Now, who are they targeting to replace him? Here are all the latest news & rumors you need to know:

AD John Currie told recruit deadline for hiring new coach
Coaching searches can take time, but Tennessee seems to have a deadline for when they want to hire a new head coach. According to 2018 quarterback commit Adrian Martinez, athletic director John Currie told him that they will have made a hire by Dec. 20.

“I asked him, since I was enrolling early, if I could expect to get to see this new coach and talk to him and have a feel before going and signing for this school,” Martinez told SEC Country. “He said, ‘Most certainly.’

“He actually said, ’If there’s not a new head coach by Dec. 20, then there will be a new AD in town, so I’m confident he’s going to get the job done and it’s going to happen pretty quickly — as quickly as it can.”

Martinez, a four-star prospect, is ranked as the No. 7 dual-threat quarterback and No. 155 overall player in the country, according to 247sports' Composite Rankings.

Jon Gruden already calling potential assistants for his staff at Tennessee?
Gruden is Tennessee's top target to replace Jones, and while there are still questions about whether Gruden will leave his ESPN gig to take the job, college football expert John Brice reports that Gruden is already calling coaches about potentially joining him as assistants in Knoxville.

The overtures to Jon Gruden, a Super Bowl champion coach, the NFL’s most recognizable broadcast voice and one-time UT assistant coach in the 1980s, are very real and much further along than at any point in any of Tennessee’s previous courtships to the mega-star football mind.

Six different sources, ranging from current coaches to former all-time great Vols to college administrators, in the past 72-96 hours tell me that Gruden is far more seriously considering this Tennessee offer than ever before; so much so that Gruden is making some preliminary calls to coaches and other college athletics folks about potentially joining him in Knoxville.

Gruden started his career as a grad assistant for the Vols and has called coaching Tennessee his "dream job."

The final Monday Night Football broadcast of the season is on Christmas Day, five days after Currie's deadline for hiring a head coach. However, could very easily leave his role with ESPN before then.

"I love the one I have," said Mullen. "I think what you can see if what we've been able to build Mississippi State into, as I keep saying. When you look around, we've been able to build a facility. You've got an AD (athletic director John Cohen) that's been a coach and hugely supports our football program. We've built a team that's a Top 25 program, in my mind. And with the atmosphere on Saturday night, I have a great job.

"I think everybody has an opinion in the world of what I should and shouldn't do. But most of the people that know me, friends that have known me for a long time, they know I like my own opinion. I'm not really interested in other people's opinions all that much. So I like my own opinion."

Mullen is 68–45 in nine season with the Bulldogs, including a 7-3 mark so far this season.