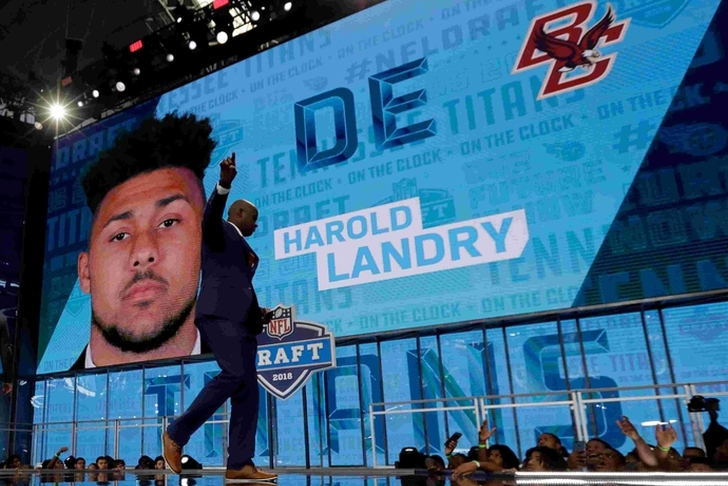 USA Today
Grade: B-
Breakdown:
"They're banking that quality trumps quantity given trades reduced them to a four-player bounty. Rashaan Evans and Harold Landry could herald the passing of the torch in the linebacking corps. They better. Unwarranted Tom Brady comparisons have been endlessly attached to sixth-round QB Luke Falk, who was naturally picked 199th (just like Brady in 2000). It would be a win if Falk merely pans out as a reliable backup to Marcus Mariota."

ESPN
Grade: B-
Breakdown:
"Credit GM Jon Robinson and the Titans for being aggressive. They traded up for all three of their top picks. The problem is that depleted their capital for the rest of the draft, and this team isn't without holes. Yes, Tennessee made the playoffs (and won a game), but I see a depth chart with aging edge defenders and issues at guard, tight end, inside linebacker and wide receiver. So the Titans ended up with only first- and second-round picks, then didn't have another selection again until the fifth round. They better hit on who they moved up for.

As for the players they got with those trades, I do see the fits. The Titans moved up ahead of 3-4 teams Pittsburgh and New England for Rashaan Evans (pick 22), who will fill Avery Williamson's spot at inside linebacker. Evans is an every-down player who can run with tight ends and backs, and he's a great fit for Tennessee's defense. I actually had pass-rusher Harold Landry to the Titans in the first round in my two-round mock, and they moved up to No. 41 to get him in the second round. He's the best true 3-4 edge rusher in this class.

I love the symmetry of former Patriot Mike Vrabel taking a quarterback with the 199th pick -- the same spot in which New England grabbed the greatest quarterback of all time. And Luke Falk actually looks up to Tom Brady and patterns his game after him. Falk isn't a great athlete, and he doesn't have the strongest arm, but that's what teams said about Brady in 1999. So, no, I don't think Falk is the next Brady, but he can be a solid NFL backup.

Again, the aggressive day from Robinson's front office is noted. With only four picks, the Titans are going to have to hit on a few undrafted free agents, too."

Bleacher Report
Grade: A-
Breakdown:
"It's hard to do well with just four selections in an entire draft class, but the Tennessee Titans were big winners despite the lack of resources. They traded up twice, stealing linebacker Rashaan Evans and edge-rusher Harold Landry from several suitors nearly on the clock. These were no-brainer decisions considering the lack of depth at each position in the class and the quality of players they attained.

Both Evans and Landry will be able to help this defense right away. Evans is a physical and efficient player in the box, making him an affordable replacement for Avery Williamson. Landry's role will grow in the future as both Derrick Morgan and Brian Orakpo are in contract years, but watch for his speed to become a huge asset on third-down passing plays in his rookie season.

Even Dane Cruikshank (No. 152 overall) and Luke Falk (No. 199 overall) were value picks. Cruikshank projects as an excellent special teamer and downhill enforcer as a third safety. Falk is more physically limited in the pocket but can become a quality backup for Marcus Mariota."

SB Nation
Grade: B
Breakdown:
"The Titans jumped ahead of the New England Patriots in the first to take Alabama linebacker Rashaan Evans. That alone earned head Titans head coach Mike Vrabel some credit. Evans played a lot on the outside at Alabama and has the physicality to play the middle.

Tennessee then jumped up to the 41st pick in the second round to take Boston College edge rusher Harold Landry. From a draft value standpoint, getting him was a great selection. However, the pick cost of Nos. 57 and 89 was high, and there are concerns about his health. But if’s healthy, the Titans have a rebuilt linebacker unit. Fifth-round pick Dane Cruikshank gives Tennessee a versatile defensive back who can play safety and cornerback."

​Yahoo Sports
Grade: C-
Breakdown:
"The Titans lost Avery Williamson, and replaced him with Rashaan Evans. That was smart. Harold Landry fell further than anticipated, reportedly due to medical issues, but if he’s healthy that’s an outstanding value pick in the second round. It also fills a need because the Titans need a young pass rusher. The Titans had only two other picks, in the fifth and sixth rounds. The sixth-round pick was quarterback Luke Falk, who perhaps can develop into Marcus Mariota’s backup. Tennessee added only two players who are likely to contribute much right away, but both were smart picks assuming Landry is healthy. It’s not without risk, though: If Landry isn’t healthy then this class is incredibly thin."

Sports Illustrated
Grade: B-
Breakdown:
"It wasn’t a heavy draft for Tennessee, but the first two picks were, in the simplest form, what a draft is all about: finding players to fill holes. Rashaan Evans, an attacker who played in a multi-faceted scheme at Alabama, fills the one left by departed free agent Avery Williamson (Jets). A lot will be asked of him in Mike Vrabel and defensive coordinator Dean Pees’s system—at least he’ll be operating alongside a steady veteran like Wesley Woodyard.

In the second round, Tennessee traded up to get late first-round projected edge rusher Harold Landry, who they don’t badly need right now but will after this season, given that Brian Orakpo and Derrick Morgan are both in the final years of their contracts. 2016 second-rounder Kevin Dodd has not developed because he fits a classic 4-3, not a flexible 3-4 like Tennessee ran under Dick LeBeau and will run in a slightly different way under first-time head coach Mike Vrabel. Tennessee’s grade is bumped down one notch to account for having to trade for the needed edge rusher, but overall, this is a very good move."