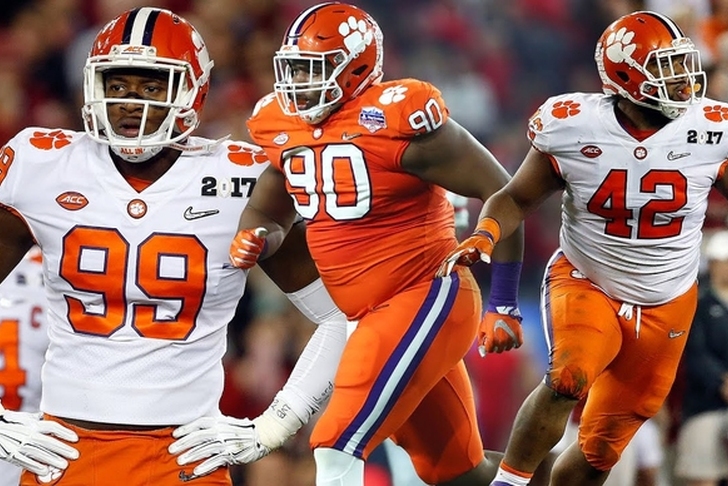 The 2018 NFL Draft is over, so naturally, it's time for a way-too-early 2019 NFL Mock Draft. While almost all these picks will be wrong, it's a fun exercise at looking ahead to next year's draft.

The order is based on the Over/Under win totals for 2018, so yell at Vegas, not me, about the order. Any tiebreakers were broken by the 2018 Draft Order. And yes, there are several teams that have over/unders far too low and will likely be drafting much higher. I'll make not of those as well.

This is really a look at what the future needs for teams could be and what prospects could be first round picks. Of course, there will be a ton of changes in both order and who goes where. That's just the nature of the NFL Draft. Unlike last year, the 2018 Draft should have quality QBs and OTs. With that out of the way, let's get to the picks.

1. Cleveland Browns: Nick Bosa, DE, Ohio State
The Browns are really in great shape with their roster, with a bunch of talented young players they'll try and develop. So we'll just give them perhaps the best player in this coming year's draft: Nick Bosa. Garrett and Bosa is a terrifying front. Also watch for a true LT

2. New York Jets: Jonah Williams, OT, Alabama
The Jets need offensive line help and Williams might be the best one in 2019. Already a multi-year starter at Alabama, Williams looks like a true LT.

3. Indianapolis Colts: Ed Oliver, DT, Houston
The Colts need an interior pass rusher and Oliver provides that. He's already declared and might be the first player off the board.

4. New York Giants: Justin Herbert, QB, Oregon
The Giants have drafted Davis Webb and Kyle Lauletta in back-to-back years. I don't think either is a true franchise QB. The 2019 QB class doesn't look great and I'm taking a big risk with Herbert in the Top 5. He might not even declare and needs to improve, but I like the flashes.

5. Tampa Bay Buccaneers: Clelin Ferrell, DE, Clemson
Ferrell would have been a first rounder this year, but returned to Clemson to form a leathal front. The Bucs are in good shape right now for pass rushers, but a young stud would be welcomed.

6. Chicago Bears: Greg Little, OT, Ole Miss
I think the Bears will be better than this, but if not, they'll get an impact player. Little is a potential LT and with Bobby Massie set to be a free agent, he could take over at one starting spot. He does need to improve in a few key areas.

7. Denver Broncos: Drew Lock, QB, Missouri
If the Broncos are in the top 10 again next year, it's time for a QB. Lock needs to work on his accuracy, but he has some real upside as a gunslinger. We'll see how he fares on a bad Missouri team.

8. Washington Redskins: AJ Brown, WR, Ole Miss
The Redskins drafting high might mean it's time for a QB. But, I'll let them roll with Alex Smith for now. Instead, I'll give them A.J. Brown and a potential true #1 WR.

9. Miami Dolphins: Rashan Gary, DT, Michigan
Gary needs to produce this year, but the upside is absolutely there. A former top recruit, he can be an NFL stud. I think he might best as a 3-tech, but could play DE if needed as well.

10. Arizona Cardinals: Jeffery Simmons, DT, Mississippi State
As you can tell, this defensive line class is loaded. Simmons might be the player the Cardinals were hoping Robert Nkemdiche would be.

11. Buffalo Bills: David Edwards, OT, Wisconsin
Tricky spot for the Bills here, who could go WR as well. But if they struggle, looking for another OT might be the way to go with Jordan Mills set to hit free agency. Edwards could be a great one.

12. San Francisco 49ers: Greedy Williams, CB, LSU
If Richard Sherman doesn't work out, CB is a big need for the 49ers. Greedy Williams might be the best one this year.

13. Oakland Raiders: Devin White, LB, LSU
The Raiders ignored the LB spot in the draft, but can correct that in 2019. Devin White is a very talented player and might be the next great LSU LB. He could go Top 10 as well.

14. Cincinnati Bengals: Trey Adams, OT, Washington
The Bengals still need OL help. If Jake Fisher and/or Cedric Ogbuehi can't man the RT spot, they have to find someone else. Adams could be that guy.

15. Tennessee Titans: Dexter Lawrence, DT, Clemson
This might be too low for Dexter Lawrence. He's a monster in the middle and a great fit for the Titans. By the way, the Titans and Texans will finish above their places.

17. Los Angeles Chargers: Shea Patterson, QB, Michigan
Patterson is eligible this year and that's huge for his draft stock. He could go before this if he shows the ability that made him a coveted recruit. Jim Harbaugh should be great for his development, but he needs to improve his consistency.

19. Jacksonville Jaguars: Jarrett Stidham, QB, Auburn
This seems WAY too low for the Jags. But if they miss the playoffs, I'll blame the QB. Stidham has upside, but he has to be better in key games. He'll be asked to do more this year and if he thrives, he could be in the mix for the Heisman and #1 overall pick.

20. Baltimore Ravens: T.J. Edwards, LB, Wisconsin
The Ravens need a LB to pair with CJ Mosely on the inside (who will hit free agency soon) and Edwards has looked great at Wisconsin.

21. Dallas Cowboys: Raekwon Davis, DT, Alabama
Davis would fill a big need for the Cowboys: DT. They need a one-tech type and I think Davis can fill that role. Plus, David Irving might not be back. This might be a steal for the Cowboys.

23. Carolina Panthers: Josh Allen, EDGE, Kentucky
Allen had some buzz this year, but returned to school. He's a bit small for the Panthers' scheme, but can rush the passer or even play some off-ball LB.

24. Atlanta Falcons: Dre'Mont Jones, DT, Ohio State
The Falcons really don't have many needs right now. Another good DT to pair (or even replace down the road) with Grady Jarrett as a disruptor would be perfect. The value could be great here.

26. Los Angeles Rams: Martez Ivey, OL, Florida
The Rams have drafted two OL this year, but Ivey can play tackle or guard in the NFL. More offensive linemen are needed for the Rams and Ivey might be best at OG.

27. Green Bay Packers (via New Orleans Saints): Collin Johnson, WR, Texas
Johnson has great size and has elite upside. He could be in for a big year at Texas and could be a first round pick.

29. Green Bay Packers: Marlon Davidson, DL, Auburn
I think he'd be a nice fit as a DE in the Packers' scheme. With Mo Wilkerson on a one-year deal, the Packers might need another one.

31. Philadelphia Eagles: Bryce Love, RB, Stanford
Someone will end up picking a RB early, but the Eagles make sense. Jay Ajayi will be a free agent and it's a need. Love returned to college and if he shows he can catch, this will be far too low for him.

32: New England Patriots: Clayton Thorson, QB, Northwestern
There are quite a few QBs that could go in Round 1, even though it's not a good draft class. Some other names to watch beyond Thorson are Ryan Finley of NC State, Will Grier of WVU and even Jake Bentley from South Carolina. I don't think it's a great QB class overall. Of course, we'll see how they all fare this year.