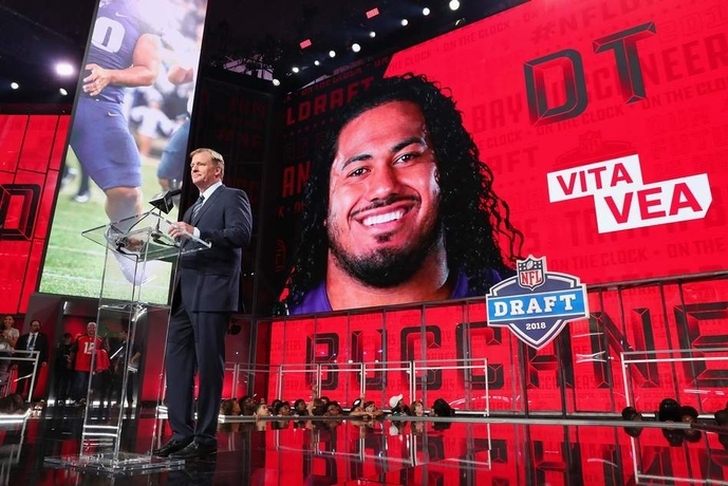 ESPN
Grade: B
Breakdown:
"The Tampa defense was abysmal last season. The Bucs allowed 5.98 yards per play, which ranked last in the league. They couldn't stop the run, and they couldn't defend the pass. They made a few moves to address the defensive line in the offseason, signing Vinny Curry and Beau Allen then trading for Jason Pierre-Paul. And they went defensive line with their first pick, adding mammoth nose tackle Vita Vea after trading down five spots with the Bills. I was a little surprised the Bucs didn't go with safety Derwin James because he was still on the board, but I like Vea, even if tackle wasn't a huge need. He should eat up blockers next to Gerald McCoy. GM Jason Licht and coach Dirk Koetter clearly identified the weakest spot on the team and fortified it this offseason.

The Bucs added two second-round picks from the Bills in that trade -- those are two really important and premium selections -- and ended up picking four times on Day 2. Running pack Ronald Jones II (pick 38) could be an immediate starter. He has breakaway speed but wasn't used much in the passing game in college. Then Licht went with back-to-back cornerbacks in M.J. Stewart (53) and Carlton Davis (63), trying to address that need in the secondary. Former first-round pick Vernon Hargreaves III has been a disappointment, so expect Stewart and Davis to compete right away. Alex Cappa (94) is a developmental prospect who was named Northwest Athletic Conference Offensive Lineman of the Year each of the past four seasons. He'll need time to adjust to the NFL. I had safety Jordan Whitehead (117) farther down on my board -- he's not very big. If Jack Cichy (202) stays healthy, he could be a good player.

Did this D get better in free agency and the draft? Six games against New Orleans, Atlanta and Carolina will tell us."

Bleacher Report
Grade: B+
Breakdown:
"The Tampa Bay Buccaneers did well to move back and collect two second-round picks in the 2018 NFL draft. They had the chance to add safety Derwin James to their secondary but instead went with mammoth defensive tackle Vita Vea in the first round. Vea is not yet a complete three-down player but is a terrific athlete for his size and is the latest investment this offseason as the team tries to shore up a woeful run defense.

General manager Jason Licht had a terrific Day 2, led by explosive running back Ronald Jones. The USC ball-carrier has home run speed and consistent vision. He should excel behind the Buccaneers' athletic offensive line and has untapped potential as a pass-catcher.

Defensive backs M.J. Stewart and Carlton Davis immediately add needed talent into one of the worst cornerback depth charts in the league, and Tampa Bay now boasts a bit of a surplus at the position. Humboldt State guard Alex Cappa had dominant film and could be the next Ali Marpet for the Buccaneers' offensive line."

SB Nation
Grade: B-
Breakdown:
"Taking defensive tackle Vita Vea in the first round over safety Derwin James was a puzzling move. Vea is a really good player, and will help a re-shaped defensive line that already added Beau Allen, Vinny Curry, and Jason Pierre-Paul. Safety was a just a need for the Buccaneers and it wasn’t addressed until the fourth round with Jordan Whitehead of Pittsburgh.

Between those two picks the Buccaneers got some starters in cornerbacks M.J. Stewart and Carlton Davis. Taken at No. 63 overall, Davis was a good value at the end of the second round. Running back Ronald Jones II is a playmaker and should get a majority of the carries for the Buccaneers. He may be an Offensive Rookie of the Year candidate. Alex Cappa has good potential at guard.

Sixth round guard Jack Cichy could stick as a nice backup if he can stay healthy. Had he not been injured last year, he may have been a top 100 pick."

​Yahoo Sports
Grade: C
Breakdown:
" Big Vita Vea completed Tampa’s overhaul on the defensive line, though it’s hard to see Vea having much of an impact on passing downs. Ronald Jones is an interesting second-round pick: Can he be an every-down back? He had some high-volume games at USC, and his game-breaking ability is undeniable. Cornerbacks M.J. Stewart and Carlton Davis need to contribute soon. Overall it’s nothing to get too excited about, unless Jones becomes an elite back right away."

Sports Illustrated
Grade: B
Breakdown:​
"It’s a little odd to sign career backup Beau Allen to a three-year, $15 million free-agent contract if the team didn’t think he’d become a starter. Vita Vea’s arrival relegates Allen to a second-string role. And the Bucs can’t play the “we didn’t think Vea would still be on the board when we picked” card because they entered this draft with the No. 7 pick. Which means they knew when they signed Allen that they could get Vea if they wanted.

If Vea had been gone at No. 12, Tampa Bay almost certainly would have drafted a defensive back—safety was their biggest need, with corner not far behind. The second-round selections of M.J. Stewart and Carlton Davis can be interpreted as a subtle message to up-and-down 2016 first-rounder Vernon Hargreaves, especially when you consider the Bucs also drafted a defensive back in the fourth round who has slot coverage potential (Jordan Whitehead). But nickel is the main defense in today’s NFL, and Tampa Bay realizes it can’t have too much depth here, especially with soon-to-be 35-year-old Brent Grimes entering perhaps his final year. If Hargreaves plays in 2018 like he did in the second half of his rookie season, he’ll be viewed unequivocally as a long-term starter.

Dropped in between these defensive picks were Ronald Jones, who fills Doug Martin’s multi-year void at running back, and Alex Cappa, an interior O-lineman. With Cappa now on the roster, it’s likely that the J.R. Sweezy experiment won’t last much longer—though some see the rookie as a tackle. If Tampa Bay does, this pick becomes that much more interesting given that 2015 second-round left tackle Donovan Smith is in a contract year."