Buccaneers Coaching Candidates: Top 10 Replacements For Dirk Koetter (If He Gets Fired) 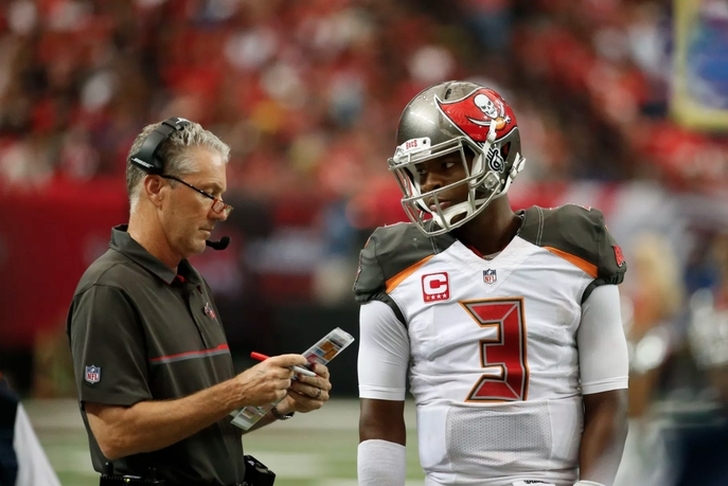 Tampa Bay has tried to quell some of the Bucs coaching rumors that have emerged about head coach Dirk Koetter's future as they have struggled this season. The Bucs have said they plan to keep Koetter, but with a 5-11 record after entering the season with postseason expectations, they could re-evaluate that decision.

In his third year in the NFL, quarterback Jameis Winston hasn't made the big leap forward that the Bucs were hoping for and it may be because of his relationship with Koetter. Having a franchise QB already on the roster would definitely appeal to potential head coaching candidates, making them a desireable destintion. So, who could they target to replace Koetter with, if they decide to fire him? Here are the 10 most likely candidates:

10. Steve Wilks, Panthers defensive coordinator
Wilks has been connected to the Giants job because of his familiarity with new general manager Dave Gettleman, but Tampa will likely explore him as an option as well. A 48-year-old DC, Wilks is in his first year in the role. He's a lesser option for the Bucs, but he does make some sense. Pulling away a coach from a division rival is a nice benefit and teams that hired an offensive minded coach can swing in the other direction with their next hire.

9. Marquand Manuel, Falcons defensive coordinator
Looking for a younger, less-known name? Marquand Manuel might be the defensive version of Sean McVay. He's just 38 years old and has already ascended to the DC role in Atlanta. He played in the NFL from 2002-09, with multiple stops in the NFL. He started coaching in 2012 with the Seahawks and has seen a very rapid rise to the DC role. He, much like Wilks, could get interviews if only to fulfill the Rooney Rule. Still, he's a name to watch going forward.

8. Pat Shurmur, Vikings offensive coordinator
The Vikings have been one of the surprise teams this season with a 10-2 record and sitting at first in the NFC playoff picture. The offense lost Teddy Bridgewater last season due to a horrific leg injury and Sam Bradford this season but the coaching of Shurmur has reignited Case Keenum's career. Not many offensive coordinators would be able to lose two quarterbacks and still be successful, just ask Adam Gase. Shurmur was the head coach of the Browns from 2011 to 2012 where things did not go well but he has rehabbed his image in stints with Philadelphia and Minnesota.

7. Dave Toub, Chiefs special teams coordinator
Toub is dubbed one of the greatest minds for coaching special teams in the history of the NFL. He has turned the Chiefs special teams into one of the most feared units, featuring Tyreek Hill. He is respected throughout the NFL and has a great relationship with the players and front office. At 55 years old, Toub is older than many first-time head coaches but will draw interest after having interviews last season. He might be better fit for a team like the Colts.

6. Teryl Austin, Lions defensive coordinator
Austin has had a relatively short NFL coaching career to this point, but he's been extremely successful. He made the Lions one of the best units in the league in his second season on the job while overcoming a multitude of injuries to key players and helping Detroit get back to the playoffs last year. Before that, he served as the defensive backs coach of Seahawks, Cardinals, and Ravens from 2003-2013 - taking a break to be Florida's defensive coordinator in 2010. Although he doesn't have any prior head coaching experience, he is still one of the rising stars in the coaching world. Due to the Rooney Rule, Austin is a good candidate to get an interview.

5. Frank Reich, Eagles offensive coordinator
Reich is one of the hottest names in the NFL right now given the success of the Eagles this season. Carson Wentz, in his second year, emerged as one of the best young quarterbacks in the league before going down. Reich would likely help Jameis Winston develop. The Eagles' creative offense is a major reason why they have had success this season and the Bucs will be looking for a fresh start. QBs coach John DeFilippo also deserves some credit for Wentz and DeFilippo will generate some buzz.

4. Jim Bob Cooter, Lions offensive coordinator
Cooter came to the Lions in 2014 as the teams' quarterbacks coach before he was promoted in Week 8 of the 2015 NFL season. Before he coached as an offensive assistant with the Denver Broncos and helped guide the Broncos offense to a 2013 Super Bowl appearance. Cooter is in his ninth NFL season and after a lackluster offensive performance from the Bengals this season, he may be the new face they need calling the shots.

3. Matt Patricia, Patriots defensive coordinator
Entering the 2017 season, Patricia was one of the more coveted coaches named. The Patriots defense struggled early on but have not allowed more than 17 points the last seven games. He gets to learn from one of the greatest NFL minds under Bill Belichick and could get this great defense back on track. The former rocket scientist has done a little bit of everything since joining the Patriots in 2004. He's served as an offensive assistant, offensive line coach, a linebackers coach, a safeties coach and took over as the defensive coordinator in 2012. The buzz around Patricia picked up last year and it should only grow. He's just 43 years old and he'll get a head coaching gig in the near future.

2. Josh McDaniels, Patriots offensive coordinator
McDaniels has rebuilt his reputation while leading the Patriots’ offense for the past five seasons after a less-than-successful head coaching debut in Denver. Its been rumored for several years that McDaniels has a strong desire to be an NFL head coach again should the right role open up. Perhaps he can bring some of the "Brady Effect" for a Bucs team that needs better play from Jameis Winston. McDaniels shouldn't have the final say in personnel decisions, especially in the draft. That's what ruined his tenure with Denver. However, McDaniels might want to take a job that will allow him to pair with a general manager he's familiar with.

1. Jon Gruden, ESPN Analyst
Ian Rapoport reports this year might be different for Gruden, as he has reached out to potential assistant coaches. If Gruden does decide to return, the Bucs are the most obvious candidate. In fact, Rapoport reports Tampa Bay is Gruden's preferred destination, which makes sense given that he still lives in the area. The Grumors will never die until Gruden becomes a head coach again.

Follow our Tampa Bay Buccaneers team page for all the latest Bucs rumors!