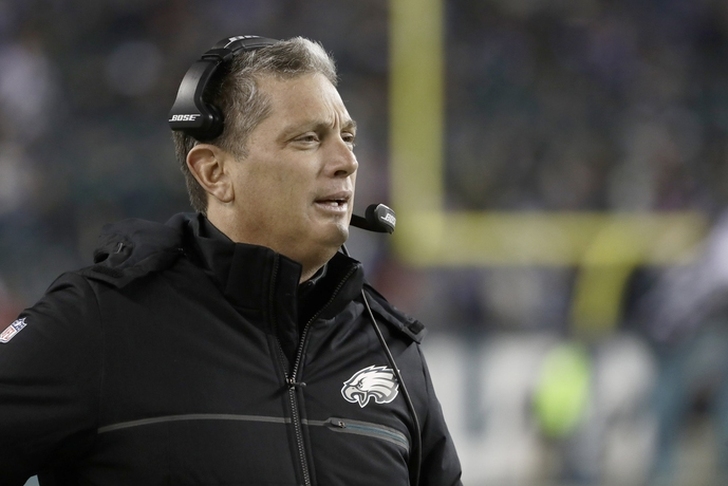 The NFL regular season wraps up on Sunday, and with it comes the start of the offseason coaching carousel. The New York Giants are looking for a new head coach after firing Ben McAdoo during the season, and after Houston Texans head coach Bill O'Brien found himself linked to that job yesterday, another coach is in the headlines today. Here's the latest on that and the other news and rumors you need to know from around the league:

Jim Schwartz a candidate for Giants job?
The Giants could reportedly have interest in Philadelphia Eagles defensive coordinator Jim Schwartz for their head coaching vacancy, according to ProFootballTalk:

Many believe that the search for a new G.M. began with the end in mind, and that [Dave] Gettleman was the choice all along. If that’s the case, it’s fair to wonder whether consultant (and former Giants G.M.) Ernie Accorsi knew who he hoped to pair with Gettleman from the get-go.

The name that keeps coming up in this regard is Eagles defensive coordinator Jim Schwartz. Although Schwartz and Gettleman have never worked together, the Accorsi connection would be the thing that puts them on the same page. Beyond Schwartz and Accorsi having a common tie to Maryland, it’s believed that Accorsi leans heavily on advice from Patriots coach Bill Belichick. It’s also believed that Belichick has advised Accorsi to recommend that Gettleman hire Schwartz.

New York is known to be looking for someone with previous head coaching experience and Schwartz helped rebuild the Detroit Lions, leading them from a 2-14 record in 2009 to a 10-6 record and a playoff appearance in 2011. However, he went 29-51 in five seasons.

He has spent the last two seasons as Philadelphia's defensive coordinator.

Eagles activate Sidney Jones, who will play Sunday
Philadelphia announced that they have activated second-round pick Sidney Jones, who has been out since suffering a ruptured Achilles in pre-draft workouts in March.

Jones was expected to be a first-round pick before the injury and could provide a significant boost to Philadelphia's secondary.

Koetter led the Bucs to a 9-7 record last season.