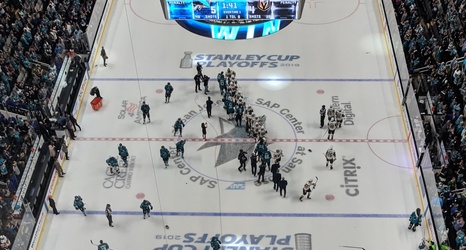 The sound, and the silence that preceded it, was unforgettable.

Sharks fans at SAP Center roared like never before on April 23, 2019, when San Jose eliminated the Vegas Golden Knights in an epic Game 7 of the teams' first-round Stanley Cup playoffs series. The sight of then-captain Joe Pavelski, bleeding and limp on the ice, emptied the arena of noise. The sight of the Sharks scoring four goals on the ensuing five-minute major penalty -- and, eventually, Barclay Goodrow's overtime winner -- easily filled it.

I reported on Game 7 from an auxiliary press box at SAP Center that night, sitting next to NBC Sports California's director of social engagement, Danny Pedroza.