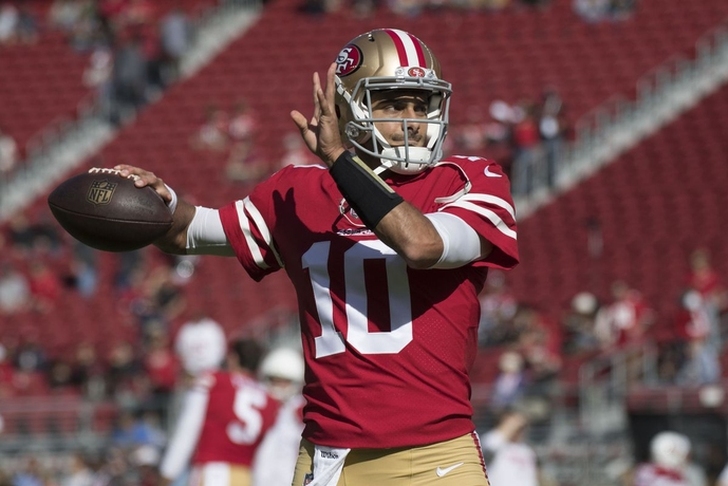 When the San Francisco 49ers acquired quarterback Jimmy Garoppolo in a trade with the New England Patriots, many thought that meant he would step right in and start for his new team.

That has not been the case with rookie C.J. Beathard starting each of the last four games, but the 49ers aren't worried. They plan to sign him to a long-term deal this offseason no matter how much - or how little - he plays this season, according to general manager John Lynch.

“We know what we like about Jimmy Garoppolo," Lynch told 49ers Game Plan. “And that’s only been strengthened by the time that’s he’s been here. We’re just going to let these things play out. That’s in Kyle’s hands.

“People have had all these ideas about why we got Jimmy. We got Jimmy because we think he has big-time ability at the quarterback position. And we believe so much – to get where we need to get – you have to have a franchise quarterback. We think he’s got that ability. Whether that happens, when that happens, we’ll see. But we certainly like his future with the 49ers.”

San Francisco - fresh off their first win of the season - is currently on their bye week, giving Garoppolo an extra week to learn the offense and get reps with the first-team offense. However, that doesn't mean he will start next week against the Seattle Seahawks.

“We want to set Jimmy up for success and also the way C.J.’s playing is helping us sit back. And now we have a bye week. They’re going to work hard during this week to get him up to speed. But right now, we don’t need him. C.J. just played a great game and his teammates really believe in him. We think it’s nothing but a good situation.”

Beathard has been playing well, passing for 1,229 yards with four touchdowns and five interceptions while rushing for 115 yards and three more scores in six appearances this season. He accounted for 303 yards of total offense and three total touchdowns in San Francisco's 31-21 win over the New York Giants on Sunday.

Garoppolo started two games for the Patriots last season during Tom Brady's suspension, passing for 496 yards with four touchdowns and no interceptions.