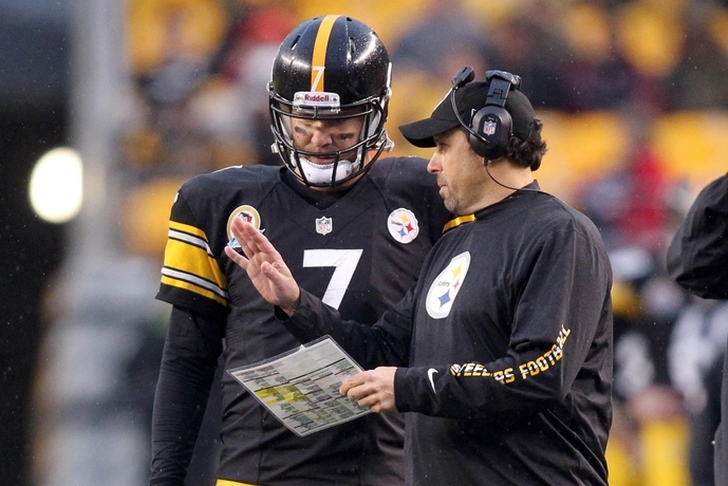 Now with Haley out, who will be the next Steelers OC for 2018? The Steelers are 45-19 in the regular season over the last four seasons, but have a 3-4 record in the playoffs during that time. Whoever will be calling the plays for the Steelers next season will get an incredibly talented offense to work with. Here are the top six offensive coordinator candidates for the Steelers in 2018.

6.) Mike Mularkey, Former Titans head coach
Mularkey was the Steelers offensive coordinator from 2001-03 and his creative play calling earned him the nickname "Inspector Gadget." Since then, Mularkey has bounced around the NFL with the Bills, Dolphins, Falcons, Jaguars, and Titans. This past season the Titans went 9-7 and won a playoff game, the first playoff victory of Mularkey's career.

5.) Ben McAdoo, Former Giants head coach
Ben McAdoo struggled as head coach of the New York Giants this past season, but was a solid offensive coordinator from 2014-15. During those two seasons, the Giants offense was productive especially quarterback Eli Manning who passed for 30 touchdowns in both seasons. McAdoo has recently been linked to the Cleveland Browns offensive coordinator job as well.

4.) Jim Caldwell, Former Lions head coach
Jim Caldwell is 62 years old with a ton of coaching experience, coaching in the NFL since 2001. He has a record of 62-50 in the regular season as a head coach with the Detroit Lions and Indianapolis Colts. The only time Caldwell has been an offensive coordinator was with the Baltimore Ravens from 2012-13.  The Lions went 9-7 this past season and after their Week 17 game against the Green Bay Packers, he was fired.

3.) John DeFilippo, Eagles quarterbacks coach
John DeFilippo will generate some coaching buzz this offseason. It might be one year too early for DeFilippo to get a head coach gig, which may force him into an offensive coordinator position. DeFilippo has OC experience, although it came with the Browns. But he gets some credit for the play of Carson Wentz and the Eagles offense in what is a down class of offensive-minded coaching options.

2.) Mike Munchak, Steelers offensive line coach
Munchak has been with the Steelers since 2014, putting together one of the best offensive lines in the NFL. Before coming to Pittsburgh he was the head coach of the Titans where he held a record of 22-26.