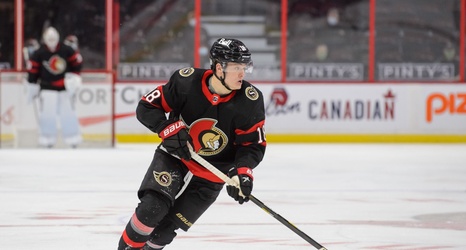 OTTAWA, ON - MARCH 1: Tim Stützle #18 of the Ottawa Senators skates against the Calgary Flames at Canadian Tire Centre on March 1, 2021 in Ottawa, Ontario, Canada. (Photo by Matt Zambonin/Freestyle Photography/Getty Images)

The Ottawa Senators head into Toronto looking to be the team to finally end goaltender Jack Campbell’s undefeated season and what better team do that than the Sickos.

The Senators prized rookie has been held without a goal over the past 13 games and will hopefully shake the monkey off his back versus the goaltender he scored his first career NHL goal against.