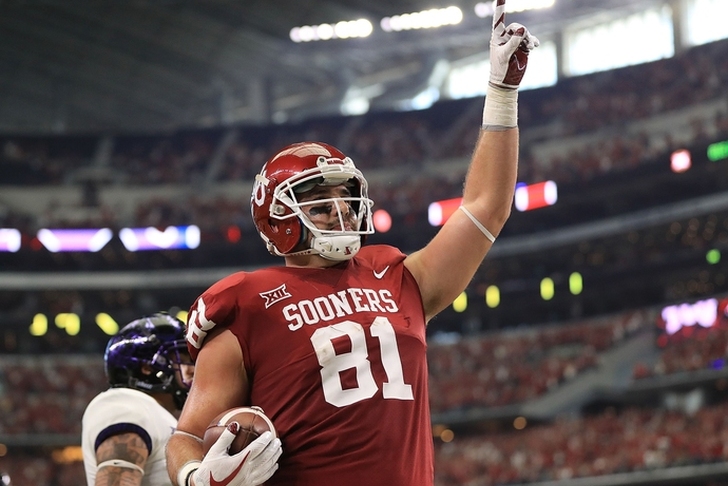 The Oklahoma Sooners finished the season with a 12-2 record, losing to Georgia in the Rose Bowl 54-48.  Losing Heisman trophy winner Baker Mayfield is going to hurt, but the team has hope they can make a smooth transition with the former five-star recruit and Texas A&M transfer Kyler Murray. The Sooners have one of the best-recruiting classes entering 2018 and will look to get back to the College Football Playoffs again. Here's how they rank in the way-too-early top 25 polls published by major publications:

Chat Sports
Ranking: 7th
Breakdown: "Losing Heisman winner Baker Mayfield is going to hurt the Sooners, but former five-star recruit and Texas A&M transfer Kyler Murray should keep Oklahoma's offense playing at a very high level. With the rest of their major offensive contributors back, OU will be the Big 12 favorite again."

USA TODAY
Ranking: 7th
Breakdown: "Few teams can replace a player of Baker Mayfield’s ability and not skip a beat. Oklahoma might not replicate this past season’s success, but with Kyler Murray set to add a different dimension as a runner the offense should remain as potent as you’ll find in the Football Bowl Subdivision. The big question: Can the defense improve and help shoulder the load?"

ESPN
Ranking: 4th
Breakdown: "OU can only hope that the transition from Mayfield to Texas A&M transfer Kyler Murray goes as smoothly. Murray played sparingly behind the Heisman Trophy winner this past season, but he possesses many of the same dual-threat skills. He'll have several playmakers around him, especially if tailback Rodney Anderson decides to return for another season."

Sporting News:
Ranking: 5th
Breakdown: "Lincoln Riley couldn't have done a better job replacing Bob Stoops, but the Sooners will lose Baker Mayfield to the NFL and a few other key pieces. Kyler Murray — a Texas high school legend — should be ready to take the job, but early tests against Florida Atlantic (yes, really) and UCLA accelerate that learning curve."

CBS
Ranking: 8th
Breakdown: "The Sooners once again will be prohibitive favorites to win the Big 12 and make a return to the CFP. Kyler Murray will be a different, but very effective, quarterback in replacing Baker Mayfield."

Athlon Sports
Ranking: 6th
Breakdown: "What’s in store for Lincoln Riley in 2018 after an impressive debut as Oklahoma’s head coach? For starters, the Sooners are likely to begin next season as the favorite to win the Big 12. There’s no doubt the offense will miss quarterback Baker Mayfield, but Texas A&M transfer Kyler Murray should keep the unit performing at a high level. Additionally, Murray’s transition to the lineup should be eased by running backs Rodney Anderson and Trey Sermon, along with receivers Marquise Brown and CeeDee Lamb. Left tackle Orlando Brown left for the NFL, and tight end Mark Andrews followed him to the next level. Even though Brown is a huge loss, the Sooners will return three starters from one of the nation’s top offensive lines in 2017. Riley will once again enter a season with question marks on defense. Oklahoma must replace Big 12 Co-Defensive Player of the Year Ogbonnia Okoronkwo, linebacker Emmanuel Beal, safety Steven Parker and end D.J. Ward. Can this unit take a step forward next fall? Linebackers Caleb Kelly and Kenneth Murray, along with cornerbacks Parnell Motley, Tre Norwood and Tre Brown provide a young foundation in the back seven, with Amani Bledsoe, Marquise Overton, Du’Vonta Lampkin and Kenneth Mann return to anchor the trenches. An interesting schedule note: Oklahoma opens with Lane Kiffin and FAU in 2018."

Yahoo Sports
Ranking: 8th
Breakdown: "Baker Mayfield is gone and this is Kyler Murray’s Sooner team now. Expect to see some more quarterback-designed runs as Lincoln Riley tailors his offense to Murray’s talents. Running back Rodney Anderson is back alongside receivers CeeDee Lamb and Marquise Brown. The loss of Ogbonnia Okoronkwo is big for a defense that was shredded against Georgia in the Rose Bowl. Will the unit improve?"

Sports Illustrated
Ranking: 8th
Breakdown: "The Sooners were more than just Mayfield in 2017, and with Kyler Murray waiting in the wings to take over at quarterback, Lincoln Riley’s team should be an offensive juggernaut as always."