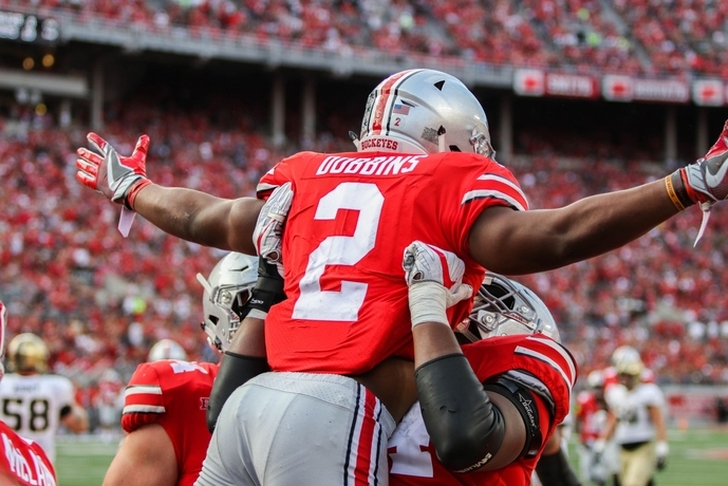 The Ohio State Buckeyes finished the season with a 12-2 record, beating USC in the Cotton Bowl 24-7. With quarterback J.T. Barrett graduating, Ohio State will have to find a new starting quarterback and the early favorite is Dwayne Haskins. The Buckeyes have one of the best-recruiting classes entering 2018 and will look to win the Big 10 again. Here's how they rank in the way-too-early top 25 polls published by major publications:

If you consider the "HorseShoe" home and hate the team up north, you'll fit in great here ---> Ohio State Buckeyes by Chat Sports

Chat Sports
Ranking: 3rd
Breakdown: "Ohio State has proven that they have the talent and depth to re-tool all of their losses and have two talented quarterbacks in Dwayne Haskins and Tate Martell who will be battling to replace J.T. Barrett. However, whoever wins will spend most of his time handing off to J.K. Dobbins, who may rush for over 2,000 yards in 2018."

USA TODAY
Ranking: 3rd
Breakdown: "The Buckeyes will sorely miss J.T. Barrett’s leadership but should feel confident in Dwayne Haskins’ ability to take the reins of the offense as a sophomore. Like Alabama, OSU will lose a number of major players to the NFL, but the inherent talent base and the addition of former Washington State assistant Alex Grinch as co-defensive coordinator will keep Urban Meyer and his team among the nation’s elite."

ESPN
Ranking: 3rd
Breakdown: "The Buckeyes fell just short of reaching the CFP for the third time in four seasons, but they finished with a five-game win streak, including a 24-7 victory over USC in the Goodyear Cotton Bowl Classic. OSU will have a quarterback battle to watch in the spring; Dwayne Haskins is the favorite to replace Barrett, but highly regarded Tate Martell is a talented dual-threat quarterback who might bring more creativity to the offense. With J.K. Dobbins and Mike Weber expected back, whoever wins the job will have plenty of help.Urban Meyer has brought on Washington State's Alex Grinch, a two-time Broyles Award nominee, to be co-defensive coordinator. The Buckeyes will have to survive three difficult road games to stay in CFP contention in 2018: TCU (in Arlington, Texas), Penn State and Michigan State."

Sporting News:
Ranking: 4th
Breakdown: "Dwayne Haskins has the early lead on what promises to be a fierce quarterback battle in Columbus, and Urban Meyer faces the usual attrition to the NFL Draft. J.K. Dobbins and Nick Bosa are back, however, and Ohio State is still the team to beat in the Big Ten despite trips to TCU, Penn State and Michigan State."

CBS
Ranking: 4th
Breakdown: "I know J.T. Barrett is gone, but Urban Meyer has won at least 11 in each of his seasons in Columbus. There are worse bets than going with that trend. The Big Ten East is loaded. Until further notice, the defending conference champion is going to win it again. "

Athlon Sports
Ranking: 3rd
Breakdown: "Urban Meyer has won at least 11 games in each of his six seasons at Ohio State. Despite some key players moving on, the Buckeyes aren’t going to slip too far in the win column. That’s largely due to Meyer and his staff delivering standout recruiting classes, as well as a talented core to build around from the 2017 team. Dwayne Haskins, Joe Burrow and Tate Martell will compete to replace J.T. Barrett at quarterback. The Buckeyes should be able to ease the transition of the new signal-caller due to a strong supporting cast. The receiving corps returns its top six performers from 2017, including Parris Campbell (40 catches) and K.J. Hill (56). J.K. Dobbins and Mike Weber combined for 2,201 yards and 19 rushing scores in 2017 and should lead the way for the offense next year. The line loses three starters, including All-Americans Jamarco Jones (left tackle) and Billy Price (center). The Buckeyes will lose at least end Sam Hubbard and cornerback Denzel Ward to the NFL, but Nick Bosa returns to anchor the line, and Tuf Boland is a future star in Columbus at linebacker. Despite the personnel losses at each level, Ohio State has a cast of talented underclassmen on the depth chart ready to step into bigger roles. The schedule features road trips to Purdue, Penn State and Michigan State, along with a neutral-site matchup against TCU. The annual showdown against Michigan takes place in Columbus on Nov. 24. "

Yahoo Sports
Ranking: 4th
Breakdown: "The Buckeyes should be the best of a really crowded Big Ten East despite all the loss of senior talent. J.T. Barrett finally used up his college eligibility meaning the quarterback for 2018 will either be Dwayne Haskins or Tate Martell. Haskins performed admirably when replacing Barrett against Michigan after the senior’s knee injury. Running backs J.K. Dobbins and Mike Weber are back too and will take pressure off whoever is playing quarterback. The Buckeyes’ depth up front on defense takes a hit, but Nick Bosa should be a star."

Sports Illustrated
Ranking: 4th​
Breakdown: "Losing Barrett will be a blow, but the Buckeyes are no stranger to attrition, and with Dwayne Haskins stepping in to take his place on a full-time bases, plus the returns of running back J.K. Dobbins and defensive end Nick Bosa, things in Columbus will be just fine."