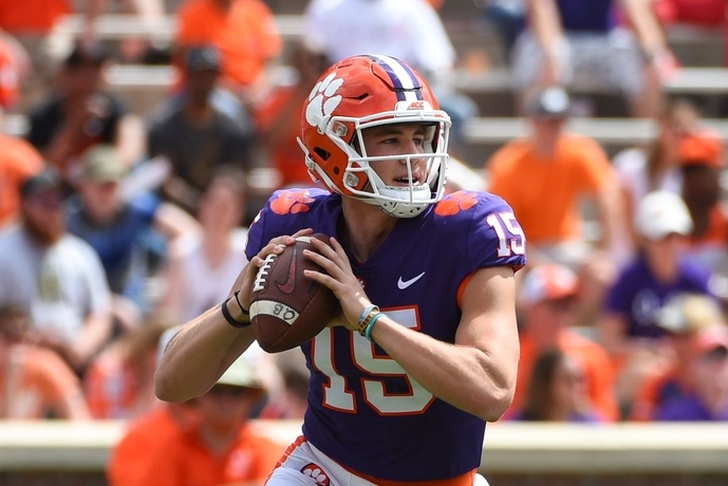 The former No. 1 ranked QB in the class of 2017 commits to Northwestern. Welcome to the family, @HunterPh413.

He was also considering Purdue, among others.

Chat Sports has partnered with FanDuel to let you play for free all World Cup long - $135,000 in prizes - click to play for free today!

"I'm thrilled to be a part of the Wildcat family," Johnson said in the release. "The program that Coach Fitzgerald and his staff have built at Northwestern is phenomenal, and one my family has had the opportunity to get to know and trust. I am thankful to Coach Swinney and the Clemson family for all their support over the past year-and-a-half. My focus now is on doing everything in my power to help this team prepare to compete for a Big Ten West title. Go 'Cats!"

Johnson, a former five-star prospect and the No. 2 pro-style quarterback in the 2017 recruiting class, was competing with incumbent starter Kelly Bryant and five-star freshman Trevor Lawrence for the starting job in the spring but was going to be the third QB on the depth chart, causing him to transfer.

The Indiana native was looking to return closer to home with this transfer, which put the Wildcats right at the forefront of his recruitment.

Johnson will have to sit out a year at Northwestern but will have three years of eligibility remaining. Current Northwestern quarterback Clayton Thornson is a projected first-round pick in the 2019 NFL Draft and is entering his senior season, meaning won't be back when Johnson becomes eligible.

That will leave the starting job wide open for Johnson, and the Wildcats project to have a solid team around him in 2019.

"We are ecstatic to add a player of Hunter's caliber and character to our program," head coach Pat Fitzgerald said in the release. "He comes from an outstanding family, one we've had the opportunity to know for many years, and he will fit right in to the culture we continue to build here in Evanston. I'm excited for the opportunity to be his coach and look forward to him joining our football family on campus this month."

Johnson played in seven games as Bryant's backup last season, completing 21/27 passes for 234 yards and two touchdowns with one interception.

Chat Sports has partnered with FanDuel to let you play for free all World Cup long - $135,000 in prizes - click to play for free today!