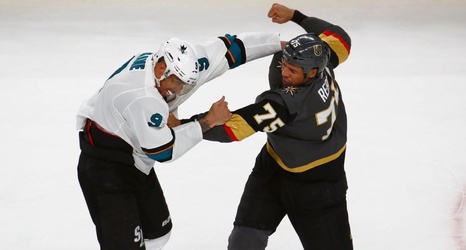 LAS VEGAS -- Jim Breus is standing in front of T-Mobile Arena, home of the Vegas Golden Knights, dangling a large, plush-toy shark from a stick, with a noose tied around its tail. Nearby, another stuffed shark is impaled on a medieval sword, and a mini plush mako has been repurposed as a chew toy for a Sin City canine.

The message was clear: Not even stuffed animals were safe from the searing rage Knights fans felt toward their team's newly cemented arch rival, the San Jose Sharks.

"I was born and raised here in Vegas.