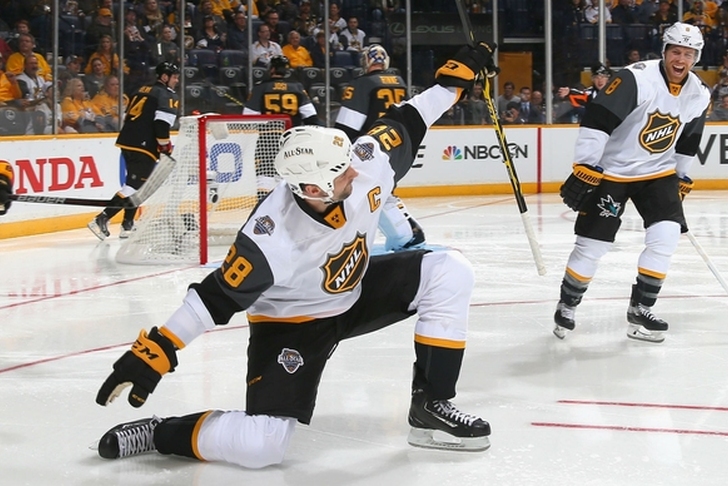 This week was a short one in professional hockey, as the NHL played just three nights of games before going on hiatus for the All-Star break. Because of the lack of movement in the rankings with just a contest or two being played by any one team - and the notable storylines that were explored at the ASG - this week I've decided to do something a little... different. I'll still rank each team in the traditional sense, but I'll include a fun, All-Star Weekend twist under each discription. Sound good? Good.

The All-Star Game in Nashville was, depsite the best efforts of the NHL brass, a success. The new divisional format was a surprising treat and the John Scott saga ended just as surreally as it began. After inciting an online riot following his piece in The Players' Tribune, Scott got his wish to play in the ASG. Not only did he compete, but he scored two goals and was hoisted into the air, Rudy-style, by his teammates. And in one final act of internet-age defiance, the fans and media voted him the most valuable player as a write-in candidate. It was the most fun an All-Star event has been, in any sport, for quite some time, and it established a cult hero in one of the most bizarre odysseys the league has ever seen. Here are just a few of the reasons the weekend was so special.

1. Washington Capitals (35-8-4) - Last Week: 1
Alexander Ovechkin pulling out of the All-Star Game with a lower-body injury opened the door for teammate and fellow fun-loving Russian Evgeny Kuznetsov to shine, and the budding star did not disappoint. His shootout move was a fitting tribute to the Great 8.

2. Dallas Stars (31-14-5) - Last Week: 3
Tyler Seguin had quite the 24th birthday, which was made even more interesting on Sunday when he swore on live television. In his defense, it was a pretty *expletive* good save.

3. Chicago Blackhawks (33-16-4) - Last Week: 2
Patrick Kane was booed by the Nashville crowd all weekend, though he did receive some praise following a tap-in goal and a faux fight with former-teammate Scott.

4. Los Angeles Kings (30-16-3) - Last Week: 4
For my money, this hug between John Scott and Chris Sutter was the crowning moment of the weekend. I'm actually surprised that the internet didn't explode after this exchange.

6. St. Louis Blues (28-16-8) - Last Week: 6
Vladimir Tarasenko become the first Blues forward to be selected for back-to-back All-Star Games since Pavol Demitra in 1999. I'm looking forward to seeing him in about a dozen more of these things.

8. New York Rangers (27-17-5) - Last Week: 8
Ryan McDonagh was elected to his first All-Star Game this year at the age of 26. Unfortunately for Rangers fans (though unsurprisingly) Henrik Lundqvist and Mats Zuccarello were passed up this year and McDonagh was the sole ambassador for the Blueshirts.

9. Detroit Red Wings (25-16-8) - Last Week: 11
Not only did 19-year old rookie Dylan Larkin set the NHL fastest skater record while nearly losing control on one of his turns, but he managed three assists in the second 20-minute session on Sunday. Not too shabby for the Red Wings' lone selection and the first such rookie Red Wing to earn ASG honors since Steve Yzerman in 1984.

10. New York Islanders (25-16-6) - Last Week: 7
Jonathan Tavares joined up with Ryan McDonagh on a line that Metropolitan Division coach Barry Trotz dubbed "The Captains." The odd pairing played well and the rivals seemed to have fun with it. Though he's had a rough start to the year, Tavares excelled in the skills competition and the alternate selection won the Shooting Accuracy Contest.

11. Boston Bruins (26-18-5) - Last Week: 10
Colorado's Matt Duchene called Patrice Bergeron "as close to the perfect hockey player as you could ever find." While Bergy was far from perfect in the accuracy portion of the Skills Competition, he led all Atlantic Division skaters with 8:37 of ice time in the Eastern Conference game.

12. San Jose Sharks (26-18-4) - Last Week: 13
Brent Burns' beard evolution was a hit at the skills competition, but his son, along with Joe Pavelski's little one, stole their parents' thunder in the cutest segment of the evening.

13. Pittsburgh Penguins (24-17-7) - Last Week: 15
No Sid? No problem. Evgeni Malkin's go-ahead goal in his division's bout with the Atlantic highlighted all that is fun about 3-on-3 play.

14. Minnesota Wild (23-17-9) - Last Week: 14
Based on his last calendar year of play, I don't know if there is a more deserving All-Star than Devan Dubnyk. His return to Nashville was one of the oddest, most triumphant homecomings of sort in recent NHL memory.

15. New Jersey Devils (25-20-5) - Last Week: 12
He rocked a sweet set of pads AND rocked out with Amy Grant at Ryman Auditorium. Cory Schneider is one cool cat.

16. Nashville Predators (24-18-8) - Last Week: 18
The city of Nashville was an ideal spot for this year's All-Star Weekend and it didn't disappoint. Nor did Shea Weber, who won Hardest Shot for like the 37th time.

18. Carolina Hurricanes (23-20-8) - Last Week: 21
Given the Canes' limited national exposure, it's no wonder Justin Faulk isn't a household name yet. But there are few defensemen that can match him on either end of the ice, and I have no doubt we'll be seeing him at a few more of these events before his time is through.

19. Arizona Coyotes (24-20-5) - Last Week: 19
This seems like a good place to put this picture of Gary Bettman handing captain John Scott that $1 million check. Sometimes, the universe is just.

20. Anaheim Ducks (22-18-7) - Last Week: 22
At year's beginning, who would have imagined that Corey Perry and John Gibson (the latter was suiting up as an AHLer) would be NHL All-Stars?

23. Ottawa Senators (23-21-6) - Last Week: 20
Here's a reminder from Ottawa captain Erik Karlsson that the NHL All-Star Game is just a silly, entertaining pickup game. In a normal year I'd tend to agree with him. But man, I loved this season's rendition. Lighten up, dude.

24. Vancouver Canucks (20-19-11) - Last Week: 24
It's always fun hearing about nice guys receiving well-deserved accolades, and Daniel Sedin is no exception. Another All-Star selection is the icing on the cake of this year's many accomplishments for the Canucks' alternate captain.

25. Winnipeg Jets (22-24-3) - Last Week: 26
Dustin Byfuglien was the subject of trade rumors on All-Star Media Day. He and captain Andrew Ladd are both at the end of sizeable contracts, and with Byfuglien's lukewarm assessment of life in Winnipeg, smart money is on the team moving him before the February 29 trade deadline.

26. Calgary Flames (21-24-3) - Last Week: 25
The NHL has become puppy-crazy and I'm okay with that. You can thank Mark Giordano for adding to this recent phenomenon.

29. Edmonton Oilers (19-26-5) - Last Week: 29
Taylor Hall has taken several big steps forward in his game this year, and was rewarded by being selected to his first All-Star Game. Here's hoping the dynamic forward has a healthy career and attends quite a few more of these things.

30. Columbus Blue Jackets (19-27-5) - Last Week: 30
Becoming a bonafide star in his first season wearing blue helped Brandon Saad to his first All-Star appearance this weekend, where he dazzled in the Skills Competition. He'll head back to Columbus this week with the hope that he and his teammates can continue to climb out of the basement.