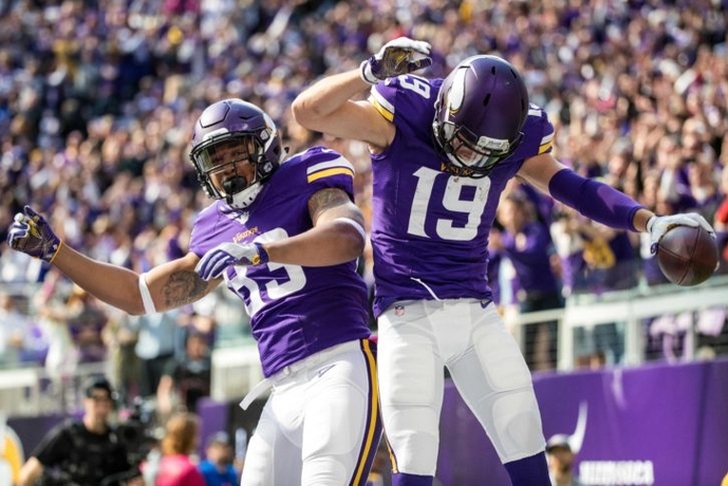 We're already five weeks into the NFL season, and contenders are starting to separate themselves from the pack. There are been several teams that have played surprisingly well this year, while others have not. Here's how everyone stacks up against each other in our NFL Power Rankings going into Week 5:

1. Minnesota Vikings (5-0)
Who thought the Vikings would be the last undefeated team in the league - especially after Teddy Bridgewater and Adrian Peterson got hurt? What Minnesota's defense has done has been impressive.

2. New England Patriots (4-1)
New England should be ecstatic about going 3-1 during Tom Brady's suspension. With him back in the fold, look out. They're going to blow out better teams than the Browns.

3. Atlanta Falcons (4-1)
Atlanta killed virtually every doubt about their ability to play with the big boys by beating the Broncos in Denver. This team is for real.

4. Seattle Seahawks (3-1)
The Seahawks seem to have figured out their offensive issues, and Russell Wilson continues to impress despite various injuries. Oh yeah, and their defense is just as good as Denver's and Minnesota's (even though you don't hear as much about them).

5. Denver Broncos (4-1)
Yes, the Broncos showed they aren't invincible against the Falcons, but they were starting their backup quarterback. The defending champs will be just fine.

6. Pittsburgh Steelers (4-1)
The Steelers just keep doing what they do - beating teams with conviction. They've certainly seemed to put their loss to the Eagles behind them.

7. Oakland Raiders (4-1)
Oakland seems to play up or down to their competition every week, but you can't argue with the results. This young team is finding their stride.

8. Green Bay Packers (3-1)
The Packers will play three games in 12 days coming off their bye week. This stretch will largely determine if they can compete for a division title with the Vikings, or if they'll be fighting for a wild card spot.

9. Dallas Cowboys (4-1)
Dak Prescott has taken the reins of the offense and has this unit playing at a high level - to the point where many are questioning if Tony Romo will get his spot back when he's healthy.

10. Philadelphia Eagles (3-1)
Philadelphia lost some of their early-season luster in their loss to the lowly Lions, but team is still one of the biggest surprises in the league - and their win over the Steelers means something.

12. Washington Redskins (3-2)
Another team with a three-game win streak, and the Redskins are clicking on all cylinders.

13. Cincinnati Bengals (2-2)
The Bengals finally woke up last week, using a strong all-around effort to blow out the Dolphins.

14. Los Angeles Rams (3-2)
LA took a step back by losing to the Bills, showing this team's inconsistency - and Jeff Fisher's questionable decision-making.

15. Arizona Cardinals (2-3)
Arizona is starting to dig themselves out of this hole by blowing out the 49ers. Can they keep it going against the Jets?

16. Kansas City Chiefs (2-2)
Kansas City's offense is still a major work in progress (as shown by their loss to the Steelers), but the defense is capable of winning them most games they play.

17. Houston Texans (3-2)
The Texans were dismantled by both the Patriots and Vikings, raising major questions about their ability to play with the big boys.

18. Detroit Lions (2-3)
Three straight losses had Jim Caldwell's job in serious jeopardy - then they beat the Eagles. Maybe this team does have some life after all.

19. Baltimore Ravens (3-2)
The Ravens' three wins have come over the Bills, Browns and Jaguars. Since then, they've lost two in row, raising questions as to how good they really are.

20. Tampa Bay Buccaneers (2-3)
Tampa Bay is another talented young team on offense, but the defense has followed suit with fellow NFC South teams Atlanta and New Orleans - they're perhaps one of the league's worst units. Yet, a win over the Panthers could push them in the right direction.

21. Carolina Panthers (1-4)
Yikes, Carolina's defense has fallen off a cliff after last year. Until they start playing better (it's not a lack of talent - expect in the secondary), this team isn't going anywhere.

22. New York Giants (2-3)
While Odell Beckham Jr. seems to be getting back on track, the rest of the team is falling apart. Three losses in a row shows this team isn't where they should be.

23. Tennessee Titans (2-3)
Tennessee needs to continue to see growth from Marcus Mariota in Year 2, and the running game looks good. Everything else is a work in progress.

24. New Orleans Saints (1-3)
Drew Brees will win this team some games, as shown by their 4th-quarter comeback win over the Chargers. But the defense is still full of question marks.

25. San Diego Chargers (1-4)
How many ways can a team blow a 4th quarter lead? Looks like the Chargers will show us this year.

26. New York Jets (1-4)
The Jets are really good when they're good. They're also really bad when they're bad. They've had a difficult schedule so far, but this is BAD.

27. Jacksonville Jaguars (1-3)
Jacksonville needed a win and had to go to London to get it - but they got it. Can they use it to start turning the season around?

28. Indianapolis Colts (2-3)
The Colts barely beat the Bears on Sunday. That's a needed win for them, but not one that's a positive sign of things to come.

29. Miami Dolphins (1-4)
Who are the Dolphins? Right now they have an underachieving defense and underwhelming quarterback. Oh yeah, and they needed overtime to beat the Browns - their only win of the year.

30. Chicago Bears (1-4)
The Bears are a team in flux undergoing a rebuild, but they have looked worse than expected. Their defense has been gashed every week, and their offense can't put points on the board.

31. San Francisco 49ers (1-4)
After San Francisco's surprising win over the Rams, they look like the lackluster team we thought they were. They could be worst team in the league.

32. Cleveland Browns (0-5)
The only winless team in the league, so the Browns are in last.