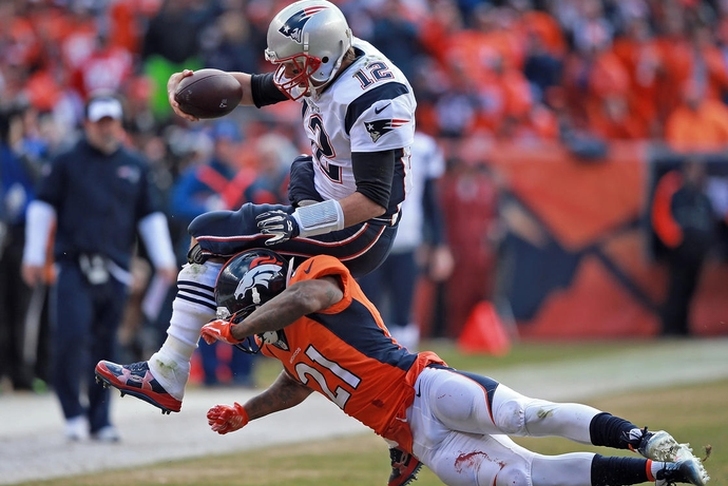 We're already three weeks into the NFL season, and teams are starting to find their identities. There are been several teams that have played surprisingly well this year, while others have not. Here's how everyone stacks up against each other in our NFL Power Rankings going into Week 4:

1. New England Patriots (3-0)
Whether it be Jimmy Garoppolo or Jacoby Brissett under center, they've proven to be the league's best team even without Tom Brady. Once he gets back, look out.

2. Denver Broncos (3-0)
Is it possible that Denver is better than they were last year? The defense is playing at an astronomical level, and Trevor Siemian is managing the offense effectively while C.J. Anderson dominates the running game.

3. Minnesota Vikings (3-0)
Sam Bradford looked much better than expected under center, and even without Adrian Peterson, Minnesota's defense can carry them to another NFC North title.

4. Seattle Seahawks (2-1)
The Seahawks seem to have figured out their offensive issues, and Russell Wilson continues to impress despite various injuries. Oh yeah, and their defense is dominant once again, too.

5. Philadelphia Eagles (3-0)
All aboard the Wentz Wagon! their domination of the Steelers showed that this team is for real.

6. Green Bay Packers (2-1)
The Packers got back on track with four first-half touchdown passes from Aaron Rodgers in a big win over the Lions. They've gotten back to looking like the team we expected them to be.

7. Pittsburgh Steelers (2-1)
The Steelers were dominant in the first two games, then had a MAJOR hiccup against the Eagles. They'll get a boost with Le'Veon Bell's return.

8. Carolina Panthers (1-2)
Carolina's offense has been held in check by the Broncos and Vikings. Can they figure it out in time to get back to being one of the best teams in the NFC.

9. Arizona Cardinals (1-2)
Should we start to worry about the Cardinals? One more loss and they'll freefall down this list.

10. Baltimore Ravens (3-0)
Yes, the Ravens are undefeated, but those wins have come over the Bills, Browns and Jaguars. They need to beat some quality competition.

11. Kansas City Chiefs (2-1)
Kansas City's offense is still a work in progress, but the defense is capable of winning them most games they play.

12. Dallas Cowboys (2-1)
Dak Prescott has taken the reins of the offense and has this unit playing at a high level - to the point where some are questioning if Tony Romo will get his spot back when he's healthy.

13. Oakland Raiders (2-1)
Oakland's defense needs to get more consistent, but we know what their young talent can do. Beating the Ravens on Sunday will show if they have what it takes to become a playoff team or not.

14. Cincinnati Bengals (1-2)
Much like Arizona, the Bengals seems to be sleepwalking. They need to right the ship tonight against the Dolphins.

15. New York Giants (2-1)
Are the Giants for real? With two close wins - both off the strength of their defense - show they've made strides after going 1-8 in close games last year.

16. Atlanta Falcons (2-1)
Atlanta's offense showed they still have life by shredding the Raiders and Saints in back to back weeks, but there are still major questions about their defense.

17. Houston Texans (2-1)
The Texans were dismantled by the Patriots, and now that J.J. Watt may be out for the rest of the year, they're in danger of spiraling downward.

18. New York Jets (1-2)
The Jets are really good when they're good. They're also really bad when they're bad. Consistency is key for them.

19. Detroit Lions (1-2)
Detroit nearly came back to beat the Packers last weekend, but they don't get points for that. They need to start turning some of these close losses into wins.

20. Washington Redskins (1-2)
Is Kirk Cousins more than just a one-year wonder? The answer seems to be no, and with big defensive questions, the Redskins could be in for a sub-.500 year. Plus, there's already rumblings of discord in the locker room.

21. Los Angeles Rams (2-1)
LA is 2-1, but didn't score a touchdown in the first two games of the season, then took advantage of a terrible Bucs defense. We still don't know how good they really are.

22. Buffalo Bills (1-2)
Buffalo has a lot of talent, but something just feels off. They need to get better rushing the passer and more consistency from Tyrod Taylor for them to accomplish their goal of making the postseason - which looks like an extreme long shot.

23. San Diego Chargers (1-2)
Keenan Allen and Danny Woodhead are done for the season already, handicapping this team that was already short on talent. Still, they're a dangerous team every week.

24. Indianapolis Colts (1-2)
Andrew Luck can make up for a lot of things, but the Colts' overall lack of talent has become blatantly obvious.

25. Tampa Bay Buccaneers (1-2)
Tampa Bay is another talented young team on offense, but the defense has followed suit with fellow NFC South teams Atlanta and New Orleans - they're perhaps one of the league's worst units.

26. Miami Dolphins (1-2)
Who are the Dolphins? Right now they have an underachieving defense and underwhelming quarterback. Oh yeah, and they needed overtime to beat the Browns.

27. Tennessee Titans (1-2)
Tennessee needs to continue to see growth from Marcus Mariota in Year 2, and the running game looks good. Everything else is a work in progress.

28. San Francisco 49ers (1-2)
The 49ers got a win over the Rams - then have been outscored by 48 combined points in the first three quarters in the last two games. They look like the lackluster team we thought they were.

29. New Orleans Saints (0-3)
Drew Brees will win this team some games. The defense will lose them a lot more.

30. Jacksonville Jaguars (0-3)
Jacksonville's good loss to Green Bay was backup with disastrous losses to the Chargers and Ravens. It seems like head coach Gus Bradley will be fired sooner rather than later.

31. Chicago Bears (0-3)
The Bears are a team in flux undergoing a rebuild, but they looked worse than expected. Their defense has been gashed every week, and their offense can't put points on the board.

32. Cleveland Browns (0-3)
Oh, Cleveland. They clearly have the worst roster in the league even though they showed signed of life last weekend, and they've been depleted by injury. It's gonna be another long season for the Browns.