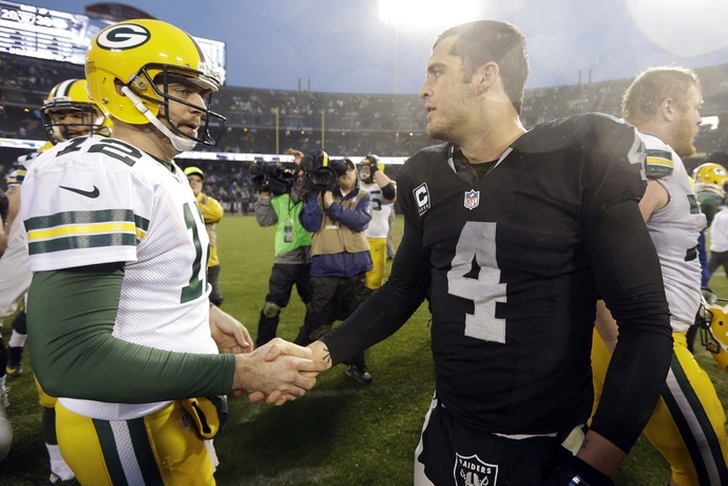 With the playoffs looming, many contenders are starting to separate themselves from the pack - but that pack is still largely cluttered thanks to close division races and plenty of teams still alive for potential wild card berths. So, how do all the other teams stack up against each other going into the final two weeks of the season? Here's our latest Power Rankings:

1. New England Patriots (12-2)
New England's offense has looked fine without Gronk, and their defense has proven to be one of the league's best units of late. The road to a Super Bowl still runs through Foxborough.

2. Dallas Cowboys (12-2)
Dallas is 12-0 against everyone not named the New York Giants, and Dak Prescott and Ezekiel Elliott are both right in the thick of the MVP race. After the Giants lost the Eagles, the Cowboys have home-field advantage throughout the NFC playoffs.

3. Oakland Raiders (11-3)
Oakland has surged back into the AFC West lead after a Kansas City loss. They haven't been overly impressive the last two weeks, but a late comeback win over the Chargers reminded us how good this team is in close games.

4. Pittsburgh Steelers (9-5)
Look who is back among the NFL's best teams! After a rocky start, the Steelers have found their stride, winning their last five games in a row.

5. Seattle Seahawks (9-4-1)
At home, Seattle is 7-0. On the road, they are just 2-4-1. However, with a home game against Arizona and a road game against the 49ers left on the schedule, they should win their final two games.

6. Kansas City Chiefs (10-4)
The Chiefs lost a shocker at Tennessee last weekend, reminding us that their defense can't always overcome their lack of explosiveness on offense.

7. Atlanta Falcons (9-5)
Atlanta is outscoring opponents 149-75 over their last four games, during which they've gone 3-1. They appear to be peaking at the right time.

8. New York Giants (10-5)
New York had a chance to clinch a playoff spot yesterday against the Eagles, but failed to do so. Still, this team has proven they have what it takes to be a championship contender.

9. Detroit Lions (9-5)
Detroit's offense fell flat against the Giants last weekend, and it remains to be seen if it's simply a one-game blip or a larger cause for concern due to Matthew Stafford's injured finger. Their game against the Packers on New Year's Day will likely determine who wins the division.

10. Green Bay Packers (8-6)
Another team surging at the right time, the Packers have won four games in a row, including the two over the Texans and Seahawks. It looks like Aaron Rodgers & Co. are finally playing up to their potential.

11. Tennessee Titans (8-6)
Tennessee has quietly won four of their last five games, including victories over the Packers, Broncos and Chiefs. A Week 17 game against the Texans could determine if they make the playoffs or not.

12. Baltimore Ravens (8-6)
Baltimore has taken care of business at the right time, winning five of their last seven games.

13. Denver Broncos (8-6)
We know how good the Broncos can be, but due to a terrible offense, they have lost four of their last six games. They're in real danger of not making the playoffs.

14. Tampa Bay Buccaneers (8-6)
Tampa Bay had their five-game win streak snapped against Dallas last weekend, putting them in the thick of a heated wild card race. Will this young team overcome their tendency to shoot themselves in the foot?

15. Miami Dolphins (9-5)
At 1-4, the Dolphins were left for dead. Now, everything has clicked as they've won eight of their last nine games. Backup quarterback Matt Moore's performance showed this team may be just fine without Ryan Tannehill.

16. Washington Redskins (7-6-1)
The Redskins had a chance to claim the final wild card spot in their Monday night game against the Panthers, but came up well short. Now having lost three of their last four games, the Redskins need to win out - and need help - to make the playoffs.

17. Buffalo Bills (7-7)
Rex Ryan's fate may already be decided - unless Buffalo wins out, gets help and makes the playoffs, Ryan will likely be gone.

18. Houston Texans (8-6)
The Texans struggle against good competition (and that's putting it mildly), but are still tied for first place in the AFC South after beating the Jaguars. Tom Savage has taken over as this team's starting quarterback after they benched Brock Osweiler - how they respond with him under center will determine their fate.

19. Indianapolis Colts (7-7)
The Colts have fallen behind both the Texans and Titans in the division, but absolutely dismantled the Vikings in Minnesota last weekend. Now comes another road game against the Raiders - a loss, and the Colts' playoff chances are likely done.

20. Minnesota Vikings (7-7)
All of the luster from Minnesota's 5-0 start has worn off. Their offense is atrocious, and their defense hasn't been able to consistently carry the load. They likely won't make the playoffs.

21. Carolina Panthers (6-8)
Carolina is mathematically eliminated from playoffs, but a win over the Redskins showed they are still a talented team.

22. New Orleans Saints (6-8)
The Saints are still alive for the playoffs, but they need a LOT of help. Drew Brees & Co. are likely done.

23. Philadelphia Eagles (6-9)
Philadelphia was 2-7 after a hot 3-1 start - until they finally won their first one-possession game of the season on Thursday against the Giants.

24. Cincinnati Bengals (5-8-1)
These Bengals simply aren't the team of the past few years. Their offense can't move the ball consistently, and their defense is like Swiss cheese.

25. Arizona Cardinals (5-8-1)
Arizona's having a down year, and it likely won't get any easier as they close the season at Seattle and at Los Angeles.

26. San Diego Chargers (5-9)
The Chargers, who have lost four of their last five games, have lost another season to injury in San Diego.

27. Chicago Bears (3-11)
The Bears are a team in flux undergoing a rebuild, but have been very competitive despite going 1-4 in their last five games. Those four losses have come by 18 combined points, and that competitiveness keeps them from being in the bottom five.

28. New York Jets (4-10)
The Jets are really good when they're good. They're also really bad when they're bad. However, they seem to have given up on the season.

29. Los Angeles Rams (4-10)
Jared Goff is a disaster, the players have shown minimal effort on the field, and now Jeff Fisher has been fired. Things are going to get worse in LA before they get better.

30. Jacksonville Jaguars (2-12)
The Jags are dreadful, and now head coach Gus Bradley has been fired. Jacksonville is a lot farther away from being competitive than we thought they were.

31. San Francisco 49ers (1-13)
After San Francisco's surprising win over the Rams, they look like the lackluster team we thought they were, losing 13 games in a row. They could be worst team in the league if it wasn't for the Browns.

32. Cleveland Browns (0-14)
It really looks like the Browns won't win a game for the rest of the season.